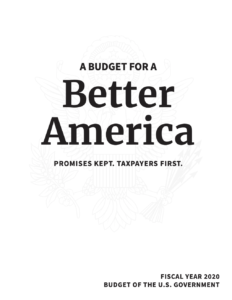 President Trump released an overview of his FY 2020 Budget Request and it contains deep requested cuts to some key Federal science agencies. The budget overall calls for a nearly 5 percent reduction in non-defense discretionary spending in FY 2020 compared to FY 2019, but that includes additional funding for disaster relief. Without the disaster relief funding, Federal agencies would absorb a 9 percent cut on average.

While we don’t yet have full details of the President’s request — agency-specific requests are due on March 18th — the overview document does provide some information. The National Science Foundation would see a decrease in funding of nearly a billion dollars in the President’s plan, to $7.1 billion overall in FY 2020. That’s a 12 percent decrease from the FY 2019 enacted level of $8.08 billion.

The request is even worse for the Department of Energy’s Office of Science. The request provides $5.5 billion for the office in FY 2020, a decrease of nearly $1.1 billion compared to the FY 2019 enacted number, or a 16.4 percent reduction. Within that budget, the request does provide $500 million for Exascale computing, $169 million for Quantum Information Science, and $71 million for Artificial Intelligence and Machine Learning.

Fortunately, President Trump’s budget requests haven’t been great barometers for how funding for the agencies will ultimately end up. Congress has mostly ignored the President’s requested funding levels and has generally rejected his proposed reorganizations of programs or agencies in the Federal science budget. Maybe what’s more useful to note are the priorities called out in the budget, which include a number relevant to the computing research community: Artificial Intelligence and Machine Learning, Quantum Science, Exascale, Advanced Manufacturing and 5G. While Congress may not share the President’s vision for agency funding levels, there’s general agreement about those areas of focus.

As noted, the agencies will release their detailed budget requests next Monday, so we should get a much better sense of how they’re prioritizing these funding levels. When we get them, we’ll share them here!