There were unfinished funding bills, there was an impasse over a wall, there was a 35-day government shutdown, there was a 3 week interregnum when government reopened and leaders sought to find a way ahead, and then there was final passage and resolution of the FY 2019 appropriations process — one that ended on a reasonably positive note for Federal science agencies.

We received that resolution back on February 15th with the passage of an omnibus appropriations bills that wrapped up all the unfinished business of the appropriations process and provided us with a look at the final numbers for Federal investments in fundamental research. So how did agencies of particular importance to the computing research community do? In a couple words: pretty ok. Most saw modest increases over FY 2018 funding levels, and those that didn’t still saw funding levels well in excess of the levels requested by President Trump. 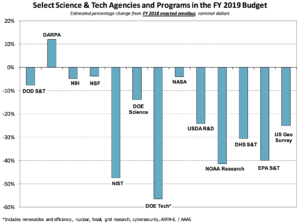 Before diving into the details, it’s worth remembering where the President hoped this process would end up. This chart, stolen from the excellent resources available at the AAAS R&D Budget and Policy program, provides an overall view of the first draft of the President’s FY 2019 Budget Request compared with FY 2018 enacted levels for science agencies and programs. Though there are some caveats to the numbers shown, and they were amended in an addendum, but in general I think it’s fair to say there’s not a lot of growth pictured.

The big takeaway from the final FY 2019 appropriations is Congress’ rejection of the President’s de-prioritization of overall Federal science budgets. Where the President sought to cut science funding almost across the board and reorganize some science agencies and programs, Congress instead funded increases almost across the board and largely rejected the reorganizations.

Here are details for some key agencies and programs:

Appropriators provided an increase of 4.0 percent to NSF compared to FY18, taking NSF’s budget above $8 billion for the first time. This funding level represents an increase of 8.1 percent over the President’s requested level for FY19. Included in that figure is an increase of 2.9 percent, or $186 million, for the Research and Related Activities account, the home for NSF’s research directorates, including the Computer and Information Science and Engineering directorate. That’s also 6.0 percent more than the President had requested. Some key language from the reports accompanying the House and Senate versions of the final bill include specific reference to the importance of “[preserving] U.S. leadership in quantum computing”, urging NSF to “make significant investments in this area,” along with a requirement that future budget requests would include a “well-funded budget line” that supports “world-class leadership computing for the national open science community.”

NSF’s Education and Human Resources account receives $910 million in the omnibus, an increase of 0.9 percent compared to FY18 and 4.2 percent more than the FY19 request. And the Major Research Equipment and Facilities Construction account would grow 61.7 percent vs. FY18 to $296 million, as appropriators included funded for 3 regional class research vessels, 2 telescopes (LSST, DKIST) and moved funding for Antarctic Modernization into the account from its previous home in R&RA.

Department of Energy Office of Science

DOE’s Office of Science will see an additional $390 million in FY19 compared to FY18, growing to $6.6 billion — a 5 percent increase. Included in that increase is a $126 million increase (15 percent) to the Advanced Scientific Computing Research program, primarily to support the continuing effort to deploy two new exascale-class computing systems in FY 21 and FY 22. The increase also includes a new $13 million for the SciDAC partnerships to allow ASCR and the other science programs within Office of Science to focus on progress in Artificial Intelligence and big data. ARPA-E, targeted for elimination in the President’s budget request, will actually see a 4 percent increase to $366 million.

Department of Defense Science and Technology

The NASA budget grows 3.5 percent to $21.5 billion in FY 2019. Included in that is a big increase for NASA’s Science programs, which would grow 11 percent to $6.9 billion. The increase primarily boosts NASA’s planetary science efforts, but it also rejects cuts the President proposed to earth science research at the agency (holding them mostly at FY18 levels).

NIH will grow by $2.7 billion, or 5 percent, to $39.8 billion. Of particular interest to the computing research community is the rejection of the President’s plan to consolidate 3 agencies (the National Institute for Disability, Independent Living, and Rehabilitation Research (NIDILRR), Agency for Healthcare Research and Quality (AHRQ) and National Institute for Occupational Safety and Health (NIOSH)) into NIH. NIDILRR in particular supports some efforts in computing research and engineering aimed at developing solutions for the disabled that researchers were concerned might not be well-suited within a more science-oriented NIH. CRA helped put together a coalition of universities and programs that might be affected by the change and sent letters to the appropriators urging against it. The appropriators agreed and rejected the reorganization.

The home to most of NIST’s research efforts will receive the same funding amount they received in FY 2018, $725 million. The President proposed cutting the lab budget by 20.9 percent in his FY 19 request.

DHS S&T is one of the only negative outcomes in the FY 19 appropriations omnibus, receiving a $21 million or -2.5 percent cut vs. FY 18. Yet that level is still $237 million above the President’s request for the directorate. Of note to the computing research community, a proposal in the President’s budget to move the Cyber Security R&D program from the S&T Directorate to a more operationally-focused National Protection and Programs Directorate was also rejected, keeping the research program within the research-oriented directorate.

So, in sum, a pretty ok year for Federal science funding and computing research.

In addition to giving agencies certainty about how much they can spend this fiscal year, having completed appropriations bills means we ought to be free of most of our worries about further government shutdowns, at least through the end of the FY 2019 fiscal year on September 30th. However, the Federal debt limit — suspended back in 2018 as part of a bipartisan budget agreement — was reinstated on March 2nd, which means the U.S. Treasury has to use “extraordinary measures” to manage Federal expenditures until a new debt limit can be passed. The current estimate is that an increase to the debt limit will need to be enacted by mid August or so, or the U.S. will risk defaulting on some of its debt. This is a long way of saying that we risk yet another budget crisis in August if congressional leaders and the President can’t agree on a new limit. While neither party in particular has an appetite for yet another disruption, debt limit extensions are often occasions to use as leverage for policy concessions on other issues. The Democratic House or Republican Senate may use the crisis to advance progress on their particular priorities.

We’re also keeping watch for the President’s FY 2020 Budget Request, which was due the first Monday in February, but has been delayed due to the government shutdown. We expect that March 18th is the likely release date. We’ll have full details on the President’s request when it appears. It’s unlikely to be markedly different than Trump’s previous budgets overall. We’re hearing that the agencies were asked to plan for a scenario that necessitated 5 percent cuts to agency budgets across the board. But we also expect to hear more priority placed on Quantum Science, Artificial Intelligence, Advanced Manufacturing, and 5G.

Finally, it’s worth noting that the favorable budget increases science agencies received in FY 18 and FY 19 were made possible by the Bipartisan Budget Agreement of 2018. That agreement relieved the budget caps that had been put in place by the Budget Control Act of 2011 — which infamously prescribed double-digit cuts to Federal discretionary spending in the form of automatic sequestrations through FY 2021. The BBA only covered FY18 and FY19, meaning for FY20, we’re back under the restricted budget caps imposed by the BCA…unless Congress again agrees to relieve the budget caps with another bipartisan budget agreement. They are hard at work on that now, and there’s some reason to believe they’ll succeed. Neither the Democrats or Republicans are huge fans of sequestration — the Republicans think the cuts fall too heavily on defense discretionary spending and the Democrats argue the same for non-defense discretionary spending. So it’s likely they’ll be able to cut a deal. However, this will be the first bipartisan agreement since the BCA between a Democratic House and Republican Senate, so the calculus is a little different.

But we’ll keep you informed!