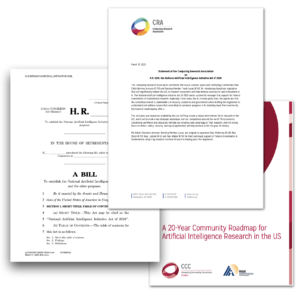 ddie Bernice Johnson (D-TX) and Ranking Member Frank Lucas (R-OK) yesterday introduced long-awaited legislation aimed at solidifying the U.S. leadership role in artificial intelligence research, education, and workforce development. The National Artificial Intelligence Initiative Act of 2020 (H.R. 6216) would authorize significant increases to the research budgets at the National Science Foundation, the Department of Energy’s Office of Science, and the National Institute for Standards and Technology over five years, allow for the creation of AI research institutes focused on economic sectors, social sectors, or cross-cutting AI technology challenges, and designate a new policy infrastructure for AI research across the Federal government.

This is a good bill.

The legislation is well aligned with many of the recommendations found in the community-led CCC 20-year AI Research Roadmap document, including the call for center-scale, interdisciplinary research efforts, support for foundational computer science research across a broad range of related areas, and support for education and workforce development efforts at Federal science agencies. The bill is also the product of a long drafting process that involved extensive consultation with academic, industry, and government stakeholders that sought to ensure not only the bill represented a clearly interdisciplinary approach to funding this area of national priority, but also that the committee’s concerns about ethics, safety, security and equal opportunity were baked in. To their credit, Chairwoman Johnson and Ranking Member Lucas sought to move beyond incremental improvements to the Federal AI research ecosystem, authorizing hefty increases to three key science agency budgets for AI research. NSF would see authorizations for its current level of investment (~$478 million in FY20) grow to $1.055 billion in FY25, including an increase of $390 million in FY21. The Department of Energy’s Office of Science would see its ~$120 million in FY20 investment authorized to $262 million in FY25. And NIST, which will spend ~$23 million on its AI research and standards efforts in FY20 grow to $93.7 million in FY25. All told, the bill would authorize $6.34 billion in spending on AI research over five years at those three agencies.

In addition to funding authorizations, the bill also formalizes a policy/advisory infrastructure for AI research by establishing a NITRD like interagency coordination committee and national coordination office, as well as a PITAC-like advisory committee for AI research. The bill also calls for a National Academies report on AI Impact on Workforce, creates AI Fellowship and Traineeship programs at NSF, funds AI education efforts at NSF, and calls on GAO to assess thee composition of computing resources supported by the Federal government and evaluate future computational needs to maintain U.S. leadership in AI.

The bill isn’t perfect. In an effort to ensure that researchers consider the ethical dimensions of their research, as well as the safety and security of their work, the bill will require all grant proposers to NSF (and DOE) to include a “Statement of Ethics” — perhaps similar to a broader impacts statement — along with their proposals. What that statement will include is left to the NSF Director and the Secretary of Energy to determine respectively, within 18 months of the bill’s passage. While we fully support the goal of making researchers more aware of the ethical dimensions of their work, we’re not sure this is approach is going to be the most effective way to do that.

Nevertheless, CRA supports this effort and has provided an endorsement of the bill.

The bill has a better than reasonable chance of passage. We know the House SS&T Committee will consider the bill (mark it up) at the end of this month, pending any further schedule chaos caused by the pandemic. Given its bipartisan sponsorship by the Chair and Ranking Member of the committee, it likely will pass and make it to the House floor, where it’s also likely to pass. The Senate is a little further behind the curve. They also have a National AI Initiative Act (S. 1558) that is less comprehensive, though similar to the House version, but it has not yet received any consideration in the Senate Commerce, Science and Transportation Committee. Ideally, H.R. 6216 would be the bill that Senate Commerce takes up after passage in the House.

The bill is also well-aligned with the AI research goals of the Administration. You may recall in the President’s FY21 Budget Request released back in February, President Trump called for significant boosts in funding for AI research at NSF, NIST and DOE (along with cuts to just about everything else). Whether that translates into the President’s approval should this bill cross his desk is an open question, but the odds are good. And though this is “just” an authorization bill — it authorizes appropriators to spend money in certain ways, but the appropriators aren’t obligated to do it — AI and Quantum Information Science have been shown pretty clear priority by congressional appropriators in the last few budget cycles. Indeed, funding for Quantum Information Science has generally followed the levels authorized in the National Quantum Initiative Act passed back in 2016. So there’s reason to be optimistic that funding could also follow this bill.

And there’s also reason to be optimistic that the funding will be quite interdisciplinary, with AI defined quite broadly. The bill notes the types of interdisciplinary work the committee expects would benefit, including (but not limited to) computer vision, robotics, hardware for accelerating AI systems, information theory, causal and statistical inference, data mining, information extraction, human-robot interaction, intelligent interfaces, computational neuroscience, reasoning and representation, speech and language, multi-agent systems, intelligent interfaces, human-artificial intelligence cooperation, artificial intelligence-augmented human problem solving, developmental biology, zoology, botany, morphological computation, organismal systems, algorithmic explainability, methods to asses, characterize, and reduce bias in datasets, safety and robustness of AI systems including assurance, verification, validation, security and control, privacy and security, fields and research areas that address the application of AI systems to scientific discovery and societal challenges, social, ethical, safety and security implications of AI systems, social impact of AI systems on different groups within society (especially historically marginalized groups) and qualitative and quantitative forecasting of future capabilities and applications. And that’s just at NSF. Agency heads will have a fair amount of flexibility for meeting the goals of this act with any of the funding that results.

So, of all of the approaches to prioritizing AI research to meet the national imperative to maintain leadership in this crucial area, this bill seems to hold the most promise. The committee has produced a one-pager on the bill. You can read the full text as well.

We’ll be following the bill as it makes its way through the legislative process. Stay tuned here for updates.

Roundup of FY2021 Research Agency Requests: NIST, NIH, and NASA, A Familiar... What’s Happening with the Federal Budget, Particularly with the Research Agencies,...
Scroll to top