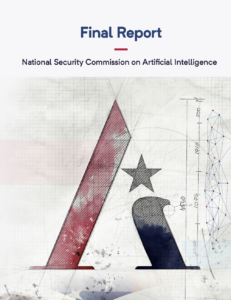 The National Security Commission on Artificial Intelligence, a congressionally-chartered committee charged with reviewing AI and related technologies and making recommendations to address U.S. national security and defense needs, today released its final report, endorsing significant new investments in AI research, strategies for building the AI workforce, and guidance for using AI in warfare while upholding U.S. democratic values. The report is likely to inform policy activity around defense-related AI issues in Congress and at the Department of Defense over the next months and years.

The report is organized around two themes: “Defending America in the AI Era,” with a focus on understanding current and future threats around AI; and “Winning the Technology Competition,” with a focus on how to optimize the research ecosystem to ensure U.S. leadership in AI and related technologies.

The report starts with the premise that AI is already ubiquitous, that it is a quintessentially “dual-use” technology with clear military applications, and that it will transform all aspects of military affairs and intelligence for the U.S. and for its allies and adversaries. The commissioners make the case for a Department of Defense led effort to develop AI-enabled autonomous weapons systems in part because they assert that our adversaries are likely to deploy them and “defending against AI-capable adversaries without employing AI is an invitation to disaster.” The commissioners believe DOD needs to have infrastructure to support AI in place by 2025, an admittedly ambitious goal, or risk losing its leadership position.

In considering the technology competition, the commissioners note that “AI will be leveraged to advance all dimensions of national power from healthcare to food production to environmental sustainability” and that the adoption of AI will “drive economies, shape societies, and determine which states exert influence and exercise power in the world.” The clear threat in this calculation, the report notes, is China, which it describes as “an AI peer” and more technologically advanced in some applications. The U.S. innovation ecosystem has been remarkably productive, the commissioners argue, but we are at a disadvantage in AI  because we lack the large state-led investments and strategies we see in China. University research, the private sector, and an innovation culture that is bottom-up will still be key drivers of AI progress in the U.S. But the report argues that even the largest U.S. tech firms can’t compete with the resources provided by China and that the U.S. needs a better effort “meshing government and private sector efforts to win.” The report calls on DOD to commit to spending at least 3.4 percent of its budget on Science and Technology (it’s currently 2.3 percent), and “allocate at least $8 billion toward AI R&D annually.”

Besides significant new investments in fundamental research and AI development, the report also calls for the creation of a new agency — a National Technology Foundation — to help meet the goal of moving emerging technologies like AI from foundational research through the more applied “valley of death” to commercialization or deployment. This adds to the chorus of voices in DC, like Senate Majority Leader Chuck Schumer (D-NY) who introduced an act last Congress that would add $100 billion in funding over five years to the National Science Foundation to give it a new “technology development” mission and rename it the National Science and Technology Foundation; and the House Science, Space and Technology Committee, which is considering proposals to add a new Technology Directorate to NSF’s Research and Related Activities account. The commitment to greater investment in these emerging areas of technology is welcome and laudable. But with it should come the caution that the details are incredibly important and that understanding the ways in which these new foci could skew our already extraordinarily productive research and innovation ecosystem is a necessity, particularly concerning open and unrestricted basic research.

CRA and its Computing Community Consortium — which has spent much of the last three years focused on AI research issues, both through the facilitation of a community-led 20 year AI Research Roadmap, and the production of a tranche of whitepapers on AI policy and research topics — engaged with the NSCAI on many occasions over the commissions 2+ years of work. The report, in general — and especially where it references research needs and articulates research as a priority for investment — clearly reflects that input, and we find it strong and commendable. The report rightly highlights the key importance of increased federal investments in fundamental research. In a focus on federal approaches to bringing emerging technologies closer to commercialization or deployment, we can’t afford to lose the support for the fundamental research enabling those technologies (and many others we don’t yet know about).

We also appreciate that the report does devote significant consideration to the importance of the DOD’s continued respect for and protection of civil liberties, privacy, and democratic values — and the importance of American leadership in advancing those values through the technologies we deploy. While the report does appropriately bring focus on ethical use of AI in context of autonomous weapons systems, it is vital that the focus persists in all implementations of the recommendations. Emphasis on ethical AI needs to persist in lifelong learning and research, transition, adoption, or innovation initiatives throughout all of national security interests — from enterprise software systems to platforms and intelligence. Also, we note that thoughtful, tech-savvy people inside and outside DOD, the Administration, and the Congress must be involved in the implementation of recommendations and the thinking, planning, and operationalizing of these deployments.

From the perspective of the research community, throughout the report there may also be an over-estimation of AI robustness and a lack of appreciation that much of AI doesn’t currently work or can’t be held accountable; quantification of uncertainty is still a very challenging technical problem. This theme is consistent across domains of warfare and intelligence.

The report does a commendable job of noting the importance of recruitment of strong AI talent. We agree that ensuring broad computing literacy and a healthy pipeline of K-12 students with solid STEM educations is at least as important. As Mignon Clyburn, an NSCAI Commissioner noted in a recent public plenary, “educate the workforce and the peopleforce to uplift all of us.” Additionally, an over-focus on “top AI talent” by funding agencies can be a detriment to national security — continued reliance on the same cohort of people can lead to blindspots. Ensuring a diversity of performers can help ensure a diversity of possible solutions to DOD problems. Broadening the definition of what “top AI talent” is and that it is not only limited to a few top tier research universities and could come from less traditional training (such as community college pathways or specialized military training) addresses this.

With the release of the report the commission has fulfilled its purpose and will expire October 1, 2021, unless Congress seeks to engage it in further work and extends its term. In the intervening months, we should expect Congress begin to act on some of the recommendations in the report through legislation (likely as part of the FY22 National Defense Authorization Act), and see the DOD begin to operationalize some of the guidance from the report. The report will serve as an excellent buttress for many of the policy goals CRA will be advocating for in the coming months and years — particularly in helping us argue the critical importance of the federal investment in fundamental research in computing. We’ll keep you updated on progress here….