The Association for Computing Machinery (ACM) and IEEE Computer Society recently announced that former CRA and CRA-WP Board Member Margaret Martonosi is the recipient of the 2021 Eckert-Mauchly Award. She was cited for contributions to the design, modeling, and verification of power-efficient computer architecture. The Eckert-Mauchly Award is known as the computer architecture community’s most prestigious award.

From the ACM news release:

Martonosi has made significant contributions in computer architecture and microarchitecture, and her work has led to new fields of research. She has authored more than 175 publications (with 17,000 + citations) on subjects including parallel architectures, memory hierarchies, compilers, and mobile networks.

Martonosi is the Hugh Trumbull Adams ’35 Professor of Computer Science at Princeton University, where she has been on the faculty since 1994.  Since February 2020, Martonosi has been serving as Assistant Director for the National Science Foundation’s Computer and Information Science and Engineering Directorate. She served on the CRA Board of Directors from 2009-2017 and as Co-Chair of CRA-WP from 2017-2019. In 2018, she also led CRA’s Computing Community Consortium effort to understand the next steps in Quantum Computing for computer science.

Martonosi will be formally recognized with the ACM-IEEE CS Eckert-Mauchly Award during the ACM/IEEE International Symposium on Computer Architecture (ISCA), which will be held virtually this year from June 14-19. 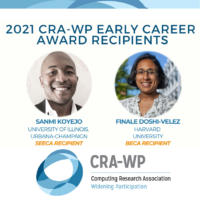