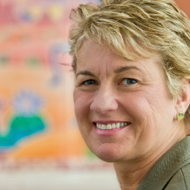 Debra J. Richardson is founding Ted and Janice Smith Dean of the Donald Bren School of Information and Computer Sciences at the University of California—Irvine. She joined the UCI faculty in 1987, and became chair of the ICS department in July 2000. Under her leadership, the department was promoted to the first computing-focused school in the UC system in December 2002, and she was appointed the founding dean. She was instrumental in securing a transformational six-figure endowment for the school, resulting in naming the school after philanthropist Donald Bren. She served as dean through June 2010.

Richardson is a Professor of Informatics. She pioneered research in “specification-based testing” and recently shifted her attention to adapting software engineering techniques to socially relevant domains, specifically focusing on sustainability. Her research has been recognized by designation as a Fellow of Automated Software Engineering, and also with two retrospective impact awards from ACM SIGSoft.

A long-time advocate of increasing the participation of women and other underrepresented minorities in computing, she has served on the leadership team of the National Center for Women and Information Technology since its inception and leads UCI’s NCWIT PaceSetter team. She chairs the Alliance for California Computing Education for Students and Schools, focusing on equitable access to K-16 computing education. She chairs the Advisory Council for ACM’s Computer Science Teachers Association, chaired CSEdWeek during its second and third years, and serves on the ACM Education Board.