Originally Printed in the Summer/Fall 2008 Newsletter

Recognizing the growing need to diversify the computer science and engineering fields, the Distributed Mentoring Program (DMP, now referred to as DREU) has provided 15 years of effort to increase the diversity of graduate students in the computing disciplines. CRA-W established the DMP in 1994.

From 1994 to 2006, the objective of the DMP was to increase the number of women entering graduate studies in the fields of computer science and engineering. Since 2007, the program has been jointly administrated by CRA-W and the Coalition to Diversity Computing (CDC), and its objective has been expanded to encourage computer scientists and engineers from all underrepresented groups, male and female, to consider graduate school. 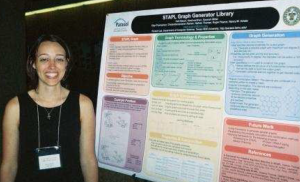 The Distributed Mentoring Program gives students the opportunity to gain research experience by matching undergraduates with faculty mentors in North America for a 10 week summer research experience at the faculty mentor’s institution, which is typically different from the undergraduate’s home institution. Through direct involvement in a research project, the students gain invaluable experience and exposure to academic research. The program also provides daily interaction with graduate students, which allows the DMP students to acquire a close-up look at the realities of graduate school.

In any field, mentoring has been linked to career success, both academically and professionally.

A study done on the DMP by the University of Wisconsin LEAD Center found that students participating in the DMP were twenty times more likely to attend graduate school than those in the control group.

By providing a mentoring relationship and a research opportunity, the DMP helps to successfully increase the participation of women and underrepresented groups in high-level academia. Since the number of female and minority faculty in most computer science and computer engineering departments is extremely low, students have severely limited access to underrepresented role models and mentors. An important aspect of the DMP is to provide students underrepresented in computing with role models that are like them. For women and minorities who don’t have access to mentors in their home institution, the DMP program provides key connections that allow women and minority faculty to meet and work with students from under-represented groups. Since 1994, the DMP has had over 400 participants from over 100 different academic institutions. The program has both faculty and student participants from all over the nation creating a broad and diverse group.

Over the past 15 years, participation in the DMP has grown. The program began with around 20 student participants and has steadily increased over the years. The DMP now has over 40 student participants each year. The number of applicants has risen significantly as well. In the first few years of the program, approximately 40-70 student applications were submitted each year. That number has more than doubled 15 years later. As the number of participants in the program expands, so does the DMP’s impact on increasing the representation of women and underrepresented groups in computer science and engineering.

In addition to relocation travel and a stipend, the program provides support for DMP students to attend technical conferences, either during the summer with their mentor’s research group or after the summer to present the results of their research. Many participants in the 2008 DMP had the opportunity to attend interesting conferences in the computer science field. Rachel Teo worked with Clare Bates Congdon at the University of Southern Maine on a project dealing with Genetic Algorithms. During the summer, Rachel attended the Genetic and Evolutionary Computation Conference (GECCO) in Atlanta, Georgia, where she had the experience of presenting a poster on her research. Yekaterina Kharitonova worked under the mentorship of Dr. Jessica Hodgins at Carnegie Mellon University on a project to enhance character animation using computer graphics and motion capture data. Yekaterina attended the 2008 SIGGRAPH conference in Los Angeles, California, a forum for state-of-the-art graphics research. During the 15 years of its operation, the DMP has made a significant impact on the field of computer science and engineering by providing mentoring and research opportunities to undergraduates from underrepresented groups. By encouraging undergraduates to pursue higher-level academic work, the DMP has helped address the root of the “shrinking pipeline” in computer science. The dedication and involvement of the faculty mentors has made the success of the DMP possible.

The DMP is currently co-directed by Nancy Amato, Texas A&M University, Tracy Camp, Colorado School of Mines, and Maria Gini, University of Minnesota. As the program moves into its 16th year, its name will change from DMP to DREU (Distributed Research Experience for Undergraduates). The new name will better reflect what the program is about and will be consistent with CREU (Collaborative Research Experience for Undergraduates), the CRA-W and CDC program that funds research experiences for undergraduate students from underrepresented groups during the academic year at their own institutions.

The Distributed Mentoring Program is possible due only to significant and continuous funding from the National Science Foundation, which has supported the program since its inception in 1994. The program has received additional support over the years from AAAI, the Henry Luce Foundation (current), USENIX, and a private foundation.