Originally Printed in the Summer/Fall 2008 Newsletter 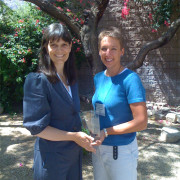 The award honors the late Anita Borg, who was an early member of CRA-W and an inspiration for her commitment in increasing the participation of women in computing research. This award is given annually by CRA-W to a woman in computer science and/or engineering who has made significant research contributions and who has contributed to her profession, especially in the outreach to women. This award recognizes work in areas of academia and industrial/government research labs that has had a positive and significant impact on advancing women in computing community and is targeted at women who are relatively early in their careers (for example, for the 2009 award, the nominee should have received her Ph.D. no earlier than September 2000). See the BECA Program page for eligibility questions.

Chandra Krintz has been an Associate Professor of Computer Science at the University of California, Santa Barbara (UCSB) since 2007. She joined the UCSB faculty in 2001 as an Assistant Professor after receiving her M.S. and Ph.D. degrees in Computer Science from the University of California, San Diego. Chandra’s research area is programming language implementation, and her work focuses on auto- matic and adaptive compiler, virtual runtime, and operating system techniques that improve performance (for high-end systems) and increase battery life (for mobile, resource constrained devices). Chandra’s research has been pub- lished in a number of ACM venues, including ASPLOS, CGO, ECOOP, LCTES, OOPSLA, PACT, PLDI, TACO,

TPDS, has been funded by grants from the National Sci- ence Foundation (NSF), Intel, and Microsoft, and has been recognized with an NSF CAREER award (in 2006).

Chandra has also been recognized for teaching excellence with the senior-selected, 2008 co-award for outstanding Faculty Member in Computer Science. Moreover, Chandra has contributed significantly to the outreach, support, and encouragement of women in the field. In particular, Chandra has been instrumental in her department’s diversity aware curriculum efforts, plays an active role as (elected) vice-chair of the Executive Committee of the ACM Special Interest Group on Programming Languages (SIGPLAN) to oversee the organization of the SIGPLAN conferences and to improve diversity and participation of women in the community, and has implemented multiple, novel, curricular directions that facilitate retention of female computer science undergraduates and that expose young girls to the opportunities and potential of computer science. Specifically, Chandra has implemented courses in which computer science and engineering students use their computer skills to help others in the community (e.g., non- profit organizations) with technology and to introduce other young people to the potential of computer science (e.g., local high school students). Since 2007, Chandra has partnered with Microsoft Research and Girls Incorporated, a nationwide non-profit organization dedicated to inspiring young girls to be strong, smart, and bold. Chandra and her students teach Girls Inc. classes (for girls of ages 9-10) that introduce the girls to and engage them with the field of computer science, and that show them how much fun computer programming can be with the help of a computer game from MSR and only a game controller.