Originally printed in the Ledger-Enquirer 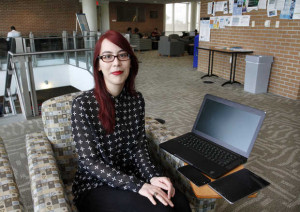 Trang Nguyen has a pastel-colored laptop cover emblazoned with woodland animals to distinguish her computer. But she doesn’t need any gimmick to distinguish her work on that machine. The Columbus High School and Georgia Tech graduate, now a Columbus State University graduate student, is among the 11 national recipients of the Scholarship for Women Studying Information Security, thanks to a $250,000 grant from Hewlett-Packard, a technology corporation based in Palo Alto, Calif. As one of the winners out of the more than 100 applicants, Nguyen received a $5,000 scholarship and an internship at HP. She is pursuing a master’s degree in applied computer science with a concentration in information assurance at Columbus State’s TSYS School of Computer Science. The increasing number of cyber threats has created a 40-percent vacancy rate in the information technology security job market, according to a February 2014 study by the Ponemon Institute, an independent research firm in Traverse City, Mich. It’s even more unusual for women to work in this field. They fill only 11 percent of the positions, according to a 2013 study by Frost & Sullivan, a global growth consulting firm headquartered in San Antonio. Nguyen, however, is on a pioneering path toward such a career, boosted by this prestigious scholarship.

Nguyen, 26, wasn’t confident she would receive the scholarship. “Actually, when I received the notification that I was selected, I thought I had misread it,” she said. “My mother had to convince me I wasn’t dreaming. It was a real shock for me. “It wasn’t for CSU assistant professors of computer science Yesem Peker and Radhouane Chouchane. They are mighty impressed with Nguyen. Peker encouraged Nguyen to apply for the scholarship after seeing the knowledge and professionalism Nguyen displayed as a teaching assistant in one of her courses. “Trang is an exemplary young woman with a high sense of responsibility and excellent communication skills,” Peker said. Chouchane is Nguyen’s research adviser. She credits him with sparking her interest in computer security and combating malicious software, called malware. He described her as a hardworking researcher “able to quickly deliver on her quality software products and publication-grade research papers with minimal supervision. She is a creative student of the sciences with a very inquisitive mind that will take her great places as she keeps growing into the field.” Her research already has taken her to some special sites. Last year, Nguyen received the Best Paper Award at the Association for Computer Machinery Mid-Southeast Conference in Gatlingburg, Tenn., for her work on mobile botnet mitigation. Botnets are groups of computers controlled from a single source and running related software. Although they can be used for constructive purposes, such a scientific processing, botnets often are used by hackers with malicious intentions. This year, at the Colloquium for Information Systems Security Education in San Diego, Nguyen presented the preliminary results of her master’s thesis, which shows that motion sensors on mobile devices are a security risk because they can be used to spy on what users are typing. Peker was there and was wowed along with the crowd. “Everyone in the audience was impressed with her presentation and work,” Peker said.

Nguyen explained her thesis this way: “When you are downloading an app, it usually says this app needs these things, like your camera or your contacts, but it doesn’t tell you if they’re going to use your motion sensors. So if an app uses this code I’m testing, they could be collecting all this data about you and use that motion sensor to see what you are typing in your email or in your texts.” When she tells folks about her thesis, Nguyen said with a laugh, they often think she is developing spyware. Instead, she is exposing the risk so mobile device manufacturers can defend against spyware. Chouchane figures Nguyen’s thesis will serve as a springboard for her to “get into major research labs in academia, industry and government that do cutting-edge research in mobile computing.” Chouchane runs a diversity program at CSU that encourages the recruitment and retention of minorities in computer science, including women such an Nguyen. “This program is part of a national, government-supported effort that is constantly looking for ways to train our minorities in computing,” he said, “and then help them proceed with their successful careers and lives as computing professionals.”

Nguyen earned her bachelor’s degree from Georgia Tech in biochemistry, but she found a better fit amid the spirit of collaboration with her peers in computer science. Although she is one of only two women in a typical computer science class at CSU, she praised the department’s students and staff for welcoming her. She emphasized that her initial loneliness and uneasiness sprung from mostly her preconceived notion that the gender gap would be a problem. “At first, this was very difficult for me, and it was actually the reason I wasn’t keen to pursue computer science during my undergraduate,” she said. “It can be tough being the odd one out. I was very lucky to be paired with a senior-level graduate student who really encouraged me when I got disheartened. She was a great support, and it was very motivating to see her succeed. Maybe as more women become successful and prominent in people’s minds, the gap between men and women in the IT field will shrink.” Women aren’t encouraged enough to seek a career in computer science or information technology, Peker said. “Those who choose these fields sometimes drop because they do not like an environment dominated by men,” she said. To reverse that trend, Peker said, students must be motivated to explore computer science and IT earlier than high school. “By that time,” she said, “they have already made up their minds on what they want to do.” And promoting the success of female students such as Nguyen also will help, Peker said. “We are so lucky to have Trang in this respect,” she said. “She is a role model in every sense of the word. … Her research is just a beginning of many great things she will be doing in the near future.”

Applied Computer Security Associates, a nonprofit organization in Silver Spring, Md., dedicated to improving the understanding, theory and practice of cybersecurity, founded the scholarship program. Along with HP, the Washington, D.C.-based Computer Research Association’s Committee on the Status of Women in Computing Research, is another sponsor. The selection criteria for the scholarship included academic performance, demonstrated interest in information security, community engagement and leadership, said Rutgers University computer science professor Rebecca Wright, co-director of the scholarship program. In addition to a perfect 4.0 grade-point average, Wright listed other reasons Nguyen was picked: “She has taken several courses related to information security. She is involved in security-related research, including work on mobile botnet mitigation that was presented and won first place in the graduate student category at the ACM Mid-Southeast conference in 2013. She has engaged in various community activities and leadership roles, including being a lab tutor and a teaching assistant, serving as the team captain to lead a team of eight students in Columbus State University’s first attempt at the Southeastern Collegiate Cyber Defense Competition, and carrying out computer science outreach activities as a member of the STARS Alliance.” Information assurance is one of the three concentrations available to master’s degree students at CSU’s TSYS School of Computer Science. The other two are modeling/simulation and software development. “I think security isn’t something people think about when it comes to IT, even students in computer science,” Nguyen said. “Fields such as gaming are really attractive to a lot of people because you see the cool end result all the time. With cyber security, you only hear about the negatives, the failures and security breaches, so I think it is harder to get people excited about it.”

In response to concerns raised by local industry, CSU’s TSYS School of Computer Science established the Center for Information Assurance Education. The National Security Administration has designated CSU as a National Center of Academic Excellence in Information Assurance Education. The fascination for Nguyen is understanding the technology too many folks take for granted. “There’s something satisfying in no longer seeing a piece of technology as a black box that just happens to work,” she said. “We use so much technology these days, and it is nice to know how it works.” Without a background in computer science, Nguyen has had to do extra work beyond her classes to keep up with her peers. “Fortunately, there is plenty of helpful material online,” she said. “I think it’s great that anyone who wants to can learn very useful IT skills for free.” And she is paying those lessons forward by tutoring a female undergraduate student. “I’m so happy that I can help someone,” she said.