Research Presentation: Big Messy Data: Looking for the Signal in Noisy and Biased Data
Data is not only vast, but it is often imperfect, conflicting, and untrustworthy, leading to flawed analyses and results that can be misleading. All the while, our society’s reliance on data steadily increases: data and algorithms play a major role in product recommendations, news personalization, social media interactions, autonomous vehicle decisions, and even medical diagnosis and treatment.  This presentation will highlight the impact of imperfect data on our society and discuss tools that derive diagnoses for data errors and tools for detecting biases in data-driven processes.

Mentor Presentation: How to Fail!  (A Guide to Anticipating and Overcoming Failures)
Failures are inevitable and happen to everyone.  This presentation will discuss personal experiences and will offer reflections on navigating various types of failures from the perspectives of research, graduate school, and academia in general.  Our ultimate goal is to embrace our failures, learn to expect them, accept them, and transform them into opportunities for growth. 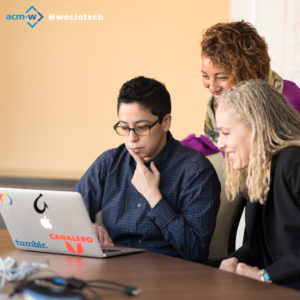 Alexandra Meliou is an Assistant Professor in the College of Information and Computer Science, at the University of Massachusetts, Amherst.  Prior to that, she was a Post-Doctoral Research Associate at the University of Washington.  Alexandra received her PhD degree from the Electrical Engineering and Computer Sciences Department at the University of California, Berkeley.  She has received recognitions for research and teaching, including a CACM Research Highlight, an ACM SIGMOD Research Highlight Award, an ACM SIGSOFT Distinguished Paper Award, an NSF CAREER Award, a Google Faculty Research Award, and a Lilly Fellowship for Teaching Excellence.  Her research focuses on data provenance, causality, explanations, data quality, and algorithmic fairness.

Host: Lori Pollock, Professor at the University of Delaware

Lori Pollock is a Professor in Computer and Information Sciences at the University of Delaware. She earned her Ph.D. and M.S. in CS at the University of Pittsburgh in 1986 and 1983, respectively, and her B.S. in CS and Economics at Allegheny College in 1981. Her research focuses on program analysis for building better software maintenance tools, software testing, energy-efficient software, and computer science education. She is an ACM Distinguished Scientist and was awarded the ACM SIGSOFT 2016 Influential Educator Award, University of Delaware’s Excellence in Teaching Award and the University of Delaware’s E. A. Trabant Award for Women’s Equity. She has actively worked on improving the participation of women and other underrepresented groups in computer science for many years. She serves on the Executive Board of the Computing Research Association’s Committee on Education and Committee on the Status of Women in Computing (CRA-W). She is also leading Partner4CS, a project towards meeting the CS10K goals in the Delaware region.

All are welcome to participate.

Are you part of an ACM-W chapter or Women in CS/CSE group? Check out our flyer on how to participate in this webinar event as a group!