Research Presentation: Optimizing in a Strategic World: An Invitation to Algorithmic Game Theory
The boundary between computer science, game theory and economics is teeming with activity. One of the most exciting topics at this intersection is “incentive engineering”: the design of protocols so that rational participants, motivated solely by their self-interest, will end up achieving the designer’s goal. In other words: algorithm design with incentives. The applications of mechanism design in the age of the Internet are vast: scheduling tasks in the cloud, routing traffic in a network, buying and selling goods in electronic marketplaces, assigning ad-slots to advertisers on search engines and on and on. In this talk, we survey this exciting research area.

Mentor Presentation: What Does a Good Grad School Application Look Like?
During this portion of the webinar Anna will give an overview of the key components of a great grad school application. Her talk will include tips on how to write your essay and how to get great recommendations.

Post-Discussion Chat: Join Anna Karlin & Sheila Castaneda for a chat to continue the discussion about finding your place, meet fellow students, and share your experiences. 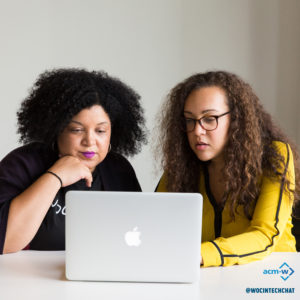 Anna R. Karlin, is the Microsoft Professor of Computer Science and Engineering at the Paul G. Allen School of Computer Science at the University of Washington. She received her Ph.D. from Stanford University in 1987. Before coming to the University of Washington, she spent 5 years as a researcher at (what was then) Digital Equipment Corporation’s Systems Research Center. Her research is primarily in theoretical computer science: the design and analysis of algorithms, particularly algorithmic game theory, probabilistic and online algorithms. She also works at the interface between theory and other areas, such as economics and game theory, data mining, operating systems, networks, and distributed systems. In addition to her many papers, she is coauthor of the book “Game Theory, Alive” with Yuval Peres, published in 2017 by the American Mathematical Society. She is a Fellow of the Association for Computing Machinery and a member of the American Academy of Arts and Sciences.

Sheila Castañeda is Professor Emerita in the Computer Science Department at Clarke University in Dubuque, Iowa, where she taught from 1980-2014. Her main areas of interest and teaching responsibility are in database systems and programming languages.

She received her master of science degree in computer science from the College of Wisconsin – Madison in 1979.  She is also a member of the Association for Computing Machinery (ACM) and its Special Interest Group on Computer Science Education (SIGCSE). Away from the office, she enjoys gardening, baking, traveling and spending time with her family.

All are welcome to participate.

Are you part of an ACM-W chapter or Women in CS/CSE group? Check out our flyer on how to participate in this webinar event as a group!