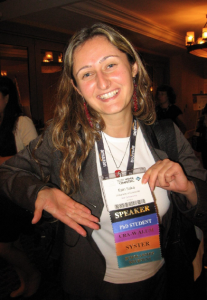 Last year, CRA-W introduced an array of new programs to a sold-out crowd of 1,570 at the Grace Hopper Celebration of Women in Computing 2009 (GHC 2009). This year promises to be even better with the programs refined and extended in response to participant feedback. GHC 2009 was held in the J.W. Marriott Conference Center in Tucson, and the confer-ence was packed with students, faculty and professionals from industry and government, representing more than 20 countries. This year’s conference will be held in Atlanta on September 28 – October 2, 2010.

The new programs include a set of short mentoring work-shops of three sessions each.   There are workshops for undergraduates, graduate students and early career researchers.  Each workshop is held in parallel to the others and in an adjacent room, so participants can network with participants from other groups or mix and match sessions from the tracks.  For example, a senior undergraduate may find the sessions for first and second year graduate students to be an interesting alternative to the corresponding undergraduate sessions.   Additional work is being done on the 2010 program to make track swapping amongst the workshops easier than ever.  A reception for participants follows the workshops.  Last year’s workshops were sponsored by CRA-W and the Henry Luce Foundation 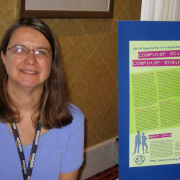 Juniors and seniors attending GHC 2010 are invited to take advantage of the strategy sessions. It may be helpful to bring your completed (or almost-done) grad school application including any essays or transcripts, and your list of candidate schools. While not strictly necessary, these materials provide the opportunity for more in depth discussion and strategizing.

In the Graduate Student Workshop at GHC 2009, participants discussed graduate school survival and thriving skills including networking and paper publication.  There were several moments of laughter as present students and professors described their ways of making the best of the worst in graduate school. The Graduate Student Workshop provides a taste of the sessions included in the longer CRA-W Grad Cohort for Women.  The Grad Cohort is a two day program where graduate students form lasting relationships with other students while attending a series of career building sessions.  The Cohort meets in different cities, typically on the West Coast.  First and second year graduate students are welcome to apply to participate.  Generous funding to support the travel and participation of students is supplied by our sponsors. 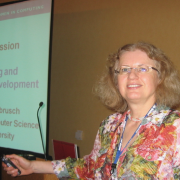 In the GHC 2009 Early Career Workshop, the participants discussed techniques for building their research program and successfully obtaining promotions, whether in academia, industry or government. The Early Career Workshop is an excerpt from the Early Career Mentoring Workshops (CMW) . There are three tracks: one for research faculty (CMW-R), one for faculty in undergraduate education (CMW-E), and one for industrial or government labs researchers (CMW-L).

With sponsorship from AT&T Research Labs, CRA-W gathers researchers from industrial and government labs together for lunch at the Grace Hopper Conference.   The luncheon provides a unique opportunity to discuss problems, concerns and possible programs to the benefit of all research labs. The Computing Research Association Committee on the Status of Women in Computing Research (CRA-W) is a founding sponsor of the Grace Hopper Confer  ence, and has participated in every conference from the very first.  These new exciting programs give everyone the opportunity to sample some of the best of CRA-W at Grace Hopper.  Hope to see you there!