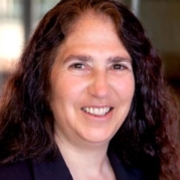 Nancy M. Amato is Head of the Computer Science Department and Abel Bliss Professor of Engineering at the University of Illinois at Urbana-Champaign.  She received undergraduate degrees in Mathematical Sciences and Economics from Stanford, and M.S. and Ph.D. degrees in Computer Science from UC Berkeley and the University of Illinois, respectively.  Before returning to her alma mater in 2019, she was Unocal Professor and Regents Professor at Texas A&M University and Senior Director of Engineering Honors Programs.

Amato is known for algorithmic contributions to robotics task and motion planning, computational biology and geometry, and parallel and distributed computing.  Her group has developed several groundbreaking approaches for biasing sampling that have enabled sampling-based motion planning, the dominant approach in use today in robotics, to be applied in areas where it was not feasible before.  She and her students were the first to use these methods to study protein motion and folding.  She is also known for her work in computational geometry, including the development of approximate convex decomposition (ACD) for partitioning polyhedra, and parallel algorithms, including novel approaches for parallel graph traversals.

Amato has been very involved in activities dedicated to broadening participation in computing at the international, national, and local level.  She was Co-Chair of CRA-WP (2014-2017) and of the NCWIT Academic Alliance (2009-2011), has Co-Directed the CRA-WP DREU program since 2000, and was Program Chair for the 2015 IEEE International Conference on Robotics and Automation (ICRA) which featured an all-female organizing committee and 50% female invited speakers.

Amato received the 2019 IEEE RAS Saridis Leadership Award in Robotics and Automation, the inaugural NCWIT Harrold/Notkin Research and Graduate Mentoring Award in 2014, and the 2014 CRA Haberman Award for her contributions to increasing diversity in computing.  She is a Fellow of the AAAI, AAAS, ACM, and IEEE