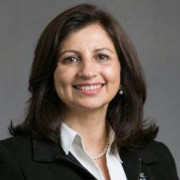 Her current research interests include developing algorithmic solutions to facilitate designing integrated circuits, and understanding the impact of new technologies such as double-gate devices, carbon nanotubes, and 3-D integration on design.

Dr. Hassoun was a recipient of the NSF CAREER Award, and several awards from ACM/SIGDA for her service, including the Distinguished Service Award in 2000 and 2007, and the 2002 Technical Leadership Award. She held executive and technical leadership positions for several conferences and workshops, including DAC, ICCAD, IWLS, and TAU. She co-founded the International Workshop on Bio-Design Automation in 2009. She was an Associate Editor of the IEEE Transactions On Computer-Aided Design and of the IEEE Design and Test magazine. She was nominated to the Defense Science Study Group, affiliated with DARPA’s Institute for Defense Analyses. In 2013, she was recognized by the Electronic Design Automation Consortium as one of 33 luminaries in the field of Electronic Design Automation. She served on the IEEE Council on Design Automation, and was Director of Educational Activities for ACM’s Special Interest Group on Design Automation for several years. She is a fellow of Tau Beta Pi, a senior member of IEEE and ACM, and a member of Eta Kappa Nu.