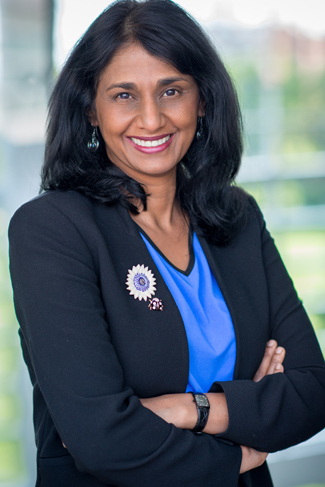 “Padma brings to Vanderbilt excellence both as a scholar and as an innovative and creative research leader with a track record of working effectively across many disciplines,” Wente said. “She joins us at a transformative time for our research enterprise. Her experience with leading collaborative and interdisciplinary research makes her the ideal person to work with our faculty to elevate the university’s research profile nationally and globally. I am thrilled that she is joining the university and look forward to working with her closely as we continue to execute the vision of the Academic Strategic Plan.”

Raghavan is currently a distinguished professor of computer science and engineering at the Pennsylvania State University, where she also serves as the associate vice president for research for strategic interdisciplinary initiatives. She is the founding director of the Penn State Institute for CyberScience, the coordinating unit on campus for developing interdisciplinary computation and data-enabled science and engineering.

“Vanderbilt is a preeminent global research university whose faculty are recognized for path-breaking research and innovative leadership in higher education. I am looking forward to working collaboratively to promote Vanderbilt’s distinctive research culture, which aspires to improve the human condition,” Raghavan said. “It will be deeply satisfying to facilitate significant outcomes from faculty-led efforts in discovery and learning around the important challenges facing our community, our country and the world. Vanderbilt is poised to reach new levels of achievement through the implementation of the Academic Strategic Plan, and it will be my privilege to serve the faculty, students and staff through stewardship of the research enterprise.”

The role of vice provost for research has been expanded from its past definition based on faculty feedback. In addition to overseeing the university’s research portfolio, Raghavan also will oversee implementation of the university’s new future vision and trans-institutional strategies and will work closely with academic deans and department chairs to advance the quality of the research enterprise across campus. She also is charged with deepening, widening and strengthening Vanderbilt’s international research connections.

Raghavan’s priorities will include developing strategies to enhance extramural support from all sources of research across the schools and colleges. She will work closely with Vanderbilt University Medical Center to support its continued strong affiliation with the university and to promote interdisciplinary initiatives, including those that enable major research funding opportunities.

In addition to overseeing the Office of the Vice Provost for Research, Raghavan will oversee the trans-institutional centers and institutes supported centrally by the Office of the Provost, the Office of Contract and Research Administration, and Global Support Services. She also will coordinate oversight of animal care, human research protection programs and environmental health and safety with the Medical Center.

The search committee, which began its work in July 2015, was appointed and chaired by Wente. Raghavan is succeeding Timothy P. McNamara, who began a one-year term as vice provost for research, faculty and international affairs Jan. 1, 2015.

Raghavan received her Ph.D. in computer science from Penn State. Before returning to Penn State in August 2000, she served as an associate professor of computer science at the University of Tennessee and as a research scientist at the Oak Ridge National Laboratory.

Raghavan conducts research in high-performance computing and computational science and engineering. In her research, she has led the development of sparse graph and matrix algorithms, which operate on compact yet accurate representations of high-dimensional data. Raghavan has developed parallel sparse linear solvers that utilize concurrent computing to enable the solution of complex large-scale modeling and simulation problems that are otherwise beyond reach. She also was among the first to propose the development of energy-efficient supercomputing by combining results from sparse scientific computing with hardware optimizations used for embedded computers. More recently, Raghavan and her students have analyzed the effects of transient hardware errors on solver performance, and they have developed resilient algorithms that can recover from such errors.

A committed and experienced mentor and educator, Raghavan has supervised 46 masters and Ph.D. theses and authored approximately 100 peer-reviewed publications. She is the recipient of several awards, including an NSF CAREER Award in 1995 and the Maria Goeppert-Mayer Distinguished Scholar Award in 2002 from the University of Chicago and the Argonne National Laboratory. She was selected as a fellow of the Institute of Electrical and Electronics Engineers (IEEE) in 2013.

Raghavan is a prominent member of major professional societies including the Society of Industrial and Applied Mathematics (SIAM) and IEEE. She serves on the editorial boards of theSIAM Series on Computational Science Engineering, the SIAM Series on Software Environments and Tools, and the Journal of Parallel and Distributed Computing. Raghavan is also a member of the SIAM Committee on Science policy and the SIAM Council, which together with its board and officers leads SIAM.

Raghavan serves on many advisory and review boards, including the Advisory Committee of the Directorate of Computer and Information Science and Engineering at the National Science Foundation; the National Research Council’s Committee on Future Directions for NSF Advanced Computing Infrastructure; the National Academies Panel on Information Science at the Army Research Laboratory; the review committee for the Computation Directorate at the Lawrence Livermore National Laboratory; and the Computer Research Association’s Committee on the Status of Women in Computing.

Raghavan is a first-generation immigrant who came to the United States to pursue graduate studies in computer science.  She is married to Steve Simpson, a mathematician.

Call for Nominations for BECA Award
Scroll to top