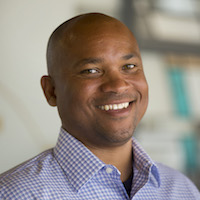 Prof. Jenkins has been recognized as a Sloan Research Fellow in 2009. He is a recipient of the Presidential Early Career Award for Scientists and Engineers (PECASE) for his work in physics-based human tracking from video. His work has also been supported by Young Investigator awards from the Office of Naval Research (ONR) for his research in learning dynamical primitives from human motion, the Air Force Office of Scientific Research (AFOSR) for his work in manifold learning and multi-robot coordination and the National Science Foundation (NSF) for robot learning from multivalued human demonstrations. Prof. Jenkins is a Senior Member of the Association for Computing Machinery and the Institute of Electrical and Electronics Engineers. He is currently a member of the Defense Science Study Group (2018-19).