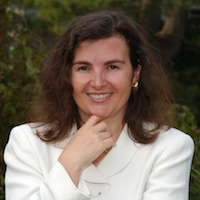 Daniela Rus is a Professor of Electrical Engineering and Computer Science and Director of the Computer Science and Artificial Intelligence Laboratory (CSAIL) at MIT. Prior to her appointment as Director, she served as Associate Director of CSAIL from 2008 to 2011, and as the Co-Director of CSAIL’s Center for Robotics from 2005 to 2012. She also leads CSAIL’s Distributed Robotics Laboratory. Rus is the first woman to serve as director of CSAIL, and its predecessors the AI Lab and the Lab for Computer Science. Her research group, the Distributed Robotics Lab, has developed modular and self-reconfiguring robots, systems of self-organizing robots, networks of robots and sensors for first-responders, mobile sensor networks, techniques for cooperative underwater robotics, and new technology for desktop robotics. They have built robots that can tend a garden, bake cookies from scratch, cut a birthday cake, fly in swarms without human aid to perform surveillance functions, and dance with humans. Rus is also a champion of youth outreach, spearheading several programs that encourage students to pursue careers in computer science. Rus is the recipient of the NSF Career Award and an Alfred P. Sloan Foundation Fellow. She is a Class of 2002 MacArthur Fellow and a fellow of AAAI and IEEE. She serves on the scientific advisory board for the Max Planck Institute, on the editorial board for the Journal of Autonomous Robots, and on the long-term planning board for the IEEE Robotics and Automation Society.