The theme of GHC 2015 was “Our Time to Lead.” Each day of the conference had technical tracks, career tracks, and a huge career/community fair (of which CRA-W took part). The two keynote speakers were fantastic, including former CRA-W board member Manuela Veloso. And, of course, the Celebration on Friday evening was a raging good time.

For the 7th year in a row, CRA-W has provided career mentoring content for GHC attendees interested in academic and/or industrial research. The 2015 CRA-W mentoring sessions took place on the initial day of GHC, October 14, and consisted of two flavors.

First, mainly for undergraduate students, CRA-W staffed eight tables in the Student Opportunity Lab (SOL) on five different topics: 1) “How to Be Successful Post-Bachelor’s?” 2) “Is Graduate School for You?” 3) “Masters or Ph.D.?” 4) “How to Successfully Apply to Graduate School?” and 5) “What is Computing Research? How Can Undergraduates Participate?” The SOL at GHC 2015 was in a large convention center room, and had about 35 tables with 1-2 mentors at each table leading discussions on different topics. The short 20-minute sessions allowed small groups of students to have interactive discussions with mentors at several different tables over the 2.5-hour SOL session. The CRA-W tables for the GHC SOL were led by CRA-W board member Andrea Danyluk, Williams College. For 2015, she recruited 26 talented mentors, coordinated all eight of the CRA-W tables, and produced fabulous mentoring material for each table that is available online. The CRA-W tables were quite a success, as illustrated by the lack of empty seats during most of the 2.5-hour SOL session.

Second, CRA-W provided career mentoring to graduate students, early career academics, and mid-career academics via three parallel workshops. These workshops are designed to be “bite-sized” versions of our longer workshops (i.e., the Grad Cohort Workshop, the Early Career Mentoring Workshop, and the Mid-Career Mentoring Workshop). Details on the GHC 2015 version of the CRA-W workshops are available here. CRA-W partners with the Anita Borg Institute in order to offer career advice to hundreds of GHC attendees, as well as to help ensure these attendees are aware of the other programs that CRA-W offers. All speakers for the CRA-W workshops at GHC 2015 are either current or former CRA-W board members.

The 2015 CRA-W track for graduate students focused on helping attendees succeed in graduate school with the following three sessions: 1) “Building Self Confidence,” presented by Cecilia Aragon, University of Washington, and Patty Lopez, Intel Corporation, 2) “Presentation and Other Verbal Communication Skills,” presented by Kathryn McKinley, Microsoft Research, and Susan Rodger, Duke University, and 3) “Finding a Research Topic,” presented by A. J. Brush, Microsoft Research, and Valerie Taylor, Texas A&M. The CRA-W Graduate Student Workshop is consistently popular at Grace Hopper, as evidenced by the large number of people who attend each session. 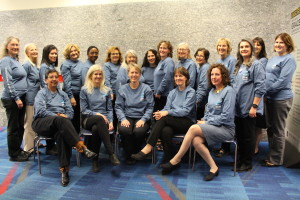 Terrific CRA staff members, including Erik Russell, Melissa Borts, Brian Mosley, Burçin Tamer, and Heather Wright, and several CRA-W Board members helped ensure the CRA-W booth at GHC 2015 was always fully staffed. The staff at the table was quite busy, answering questions and encouraging folks to participate in CRA-W programs.

CRA-W mentoring at GHC 2015 was a roaring success, thanks to 47 amazing volunteers and CRA staff members Erik Russell and Melissa Borts. GHC 2016 will return to Houston, Texas, and will be held from October 19-21. We hope to see you there!

Tracy Camp is a professor of computer science in the Department of Electrical Engineering and Computer Science at the Colorado School of Mines. Her current research interests include the credibility of ad hoc network simulation studies and the use of wireless sensor networks in geosystems. After three exhilarating years serving as Co-Chair of CRA-W, she now leads the organization of CRA-W content at the Grace Hopper Celebration.