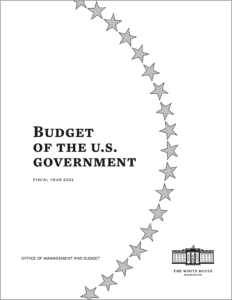 On Friday, President Joe Biden released his $6 trillion, detailed request for the FY 2022 Federal Budget, including a 9 percent increase for Federal investments in research and development across the government. This strong commitment to R&D in a budget request is a marked departure over the budget requests for science in the previous administration. It also reflects a belief by the current Administration that science can help make real progress on concerns around climate change, our health and well-being in the face of pandemic and other disease, and ensure that the U.S. maintains its economic and technological leadership against a growing threat from China and other global competitors.

Across the board, non-defense science agencies fared well in the President’s request. As we noted from the President’s “Skinny Budget” released back in April, the National Science Foundation would receive nearly 20 percent in additional funding in FY22 under the President’s plan, with the CISE directorate receiving an increase of 11 percent over FY21. The President’s request also calls for the creation of a new Directorate of Technology, Innovation, and Partnerships (TIP) alongside the existing research directorates that would focus on helping move research into the marketplace. That focus includes a $200 million requested investment in new regional innovation accelerators to help parts of the country with underdeveloped research infrastructures compete better with established tech centers like Silicon Valley. The overall requested investment in TIP would be $865 million in FY22 under the President’s plan, with a goal of total spending for the directorate of $50 billion over the next 8 years.

DOE’s Office of Science would see a more modest increase of 6 percent over FY21 under the President’s plan, with the Advanced Scientific Computing Research program growing by 2 percent to support exascale and the Leadership Class computing centers.

NIST would see its budget grow by 45 percent, including an increase of 16 percent for the Science and Technical Research and Service program.

NASA would grow by 7 percent, including a 9 percent increase for NASA Science programs.

And the National Institutes of Health would see a 21 percent increase in FY22 — its budget growing to more than $54 billion under the President’s plan.

On the Defense side, the situation is not nearly so favorable for research. Defense basic research (6.1) would decline by 13 percent under the President’s plan; applied research (6.2) would decline by 14 percent; and Advanced Technology Development would see an 11 percent decline. As is nearly always the case with the Defense request (especially for research), there is often much give and take between the President’s requested budget and the one ultimately settled on by Congress, but such big requested cuts as a starting point in the negotiation ought to raise concerns.

As always, the President’s budget request marks just the first step in the annual process that will result in the final appropriations bills that will fund all the operations of government. Congress will have its say in the coming weeks and months. While the budget requests of the previous administration were routinely ignored by Congress, many of the increases proposed in this one — especially those for NSF — will find favor in both parties, though perhaps not quite to the same degree.

In the coming days, we’ll have deeper dives on all the key science agencies, including a close look at NSF CISE and the new TIP Directorate. And, of course, we’ll bring you all the details as the appropriations process makes its long, meandering way to final resolution this Fall (or Winter?).

Invalid or expired token.
Tale of Two Bills: Competing Visions of NSF’s Future Make Their Way Through... NSF FY2022 Request: Strong Vision for NSF’s Future Backed Up with a Robust...
Scroll to top