Last week, thousands of women, minorities and other underrepresented groups used the hashtag #ILookLikeAnEngineer to share their photos in an effort to help break down stereotypes of what an engineer looks like.
The hashtag gained a lot of momentum and which attracted the attention of the news media. An article from The Seattle Times uses Taulbee data to explain that the disparity begins at the undergraduate level, where only about 12 percent of computer-science and computer-engineering degrees were awarded to women. An article in the The Apex Tribune also references Taulbee data.

Data from CRA’s Taulbee survey is frequently cited in articles concerning diversity tech industry. The survey report provides salary and demographic data for faculty in computer science and computer engineering (CS & CE) in North America, and is a trusted source of information on the enrollment, production, and employment of Ph.D.s in computer science. In addition to the full Taulbee Report publicly released each May, CRA also provides additional data analysis in Computing Research News, such as “Booming Enrollements – What is the Impact?” released this May. 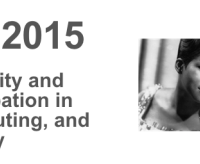 Message from CRA Board Chair Susan Davidson
Scroll to top