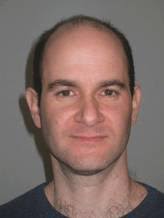 Streaming media is gaining popularity, with numerous new services for video on demand and live broadcast. Often, streaming media is consumed on mobile devices, like smartphones and tablets, in different locations and contexts. In the novel approach we present, named Smartmedia, the streamed content is adapted to the location and the context, in real time, to create a new type of user experience. The following examples illustrate the potential of Smartmedia. (1) Video scenes that are unsuitable for public places could be adapted when the content is consumed in a public location like a school or a train station. (2) Content could be personalized, e.g., for a user that prefers not to watch violent content or is in the presence of people who would prefer not to be exposed to violence, a scene in a nature film where a lion catches a gazelle would be pixelated, skipped, or replaced by a non-violent scene. (3) The length of a video that is streamed to a train passenger could be modified according to the length of the ride, e.g., by automatically slightly changing the viewing speed. (4) The content could be adjusted based on emotional responses extracted from facial expressions of the viewer, subject to opt-in of relevant privacy policies. These adaptations provide content personalization and would allow users to view content safely, in a variety of situations, rather than avoid watching the content altogether.

In Smartmedia, videos are partitioned into segments, alternative segments are created based on needs and demand, and appropriate segments are selected according to the context. In this work we explain how geofencing and geoblocking can be combined with real-time segment selection to create the new technology of contextually-adapted streaming media. In addition to content personalization, this combination can be used for (1) preventing password sharing in a non-intrusive way, (2) hyperlocal geoblocking, to facilitate copyright protection, and (3) seamlessly and safely transferring videos between nearby screens, without sharing account details. 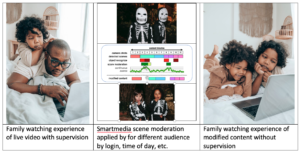 Streaming media is revolutionizing many areas by enabling impactful new services and applications, including consumption of video and music on demand, remote learning, remote conferences, streaming news, live broadcast of events, dissemination of videos in social media, and so on. In all these cases, there is a big potential to adaptation abilities that would change the content and the viewing mode to be suitable for the viewers and the context. To illustrate the novelty and the potential impact, consider the huge difference between static Web pages and Web apps. Unlike a static page, an app can adapt content to the environment and respond to interactions. Our main goal is to enable a similar revolution in streaming media.

We conduct research in a variety of areas, including data management, data analytics, data quality, video analytics, geospatial data management, privacy protection, network planning and more. Part of our research is industrial research, where we develop and test solutions that support the needs of AT&T. Other studies that we conduct are more futuristic and innovative, where we tackle problems that are more visionary or relate to technological problems that might occur in the future due to the rapid evolution in data management technologies.