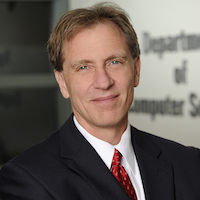 Gregory D. Hager is a Professor and former Chair of Computer Science at Johns Hopkins University. He received his BA from Luther College and his MSE and PhD from the University of Pennsylvania in 1986 and 1988, respectively. After a year as a Fulbright scholar at the University of Karlsruhe, he joined the faculty of Yale University in 1990. He moved to Johns Hopkins in 1999. His research interests include image-guided robotics, human-machine collaboration, and medical applications of image analysis and robotics. He has served as the Deputy Director of the NSF Engineering Research Center for Computer Integrated Surgical Systems and Technology, he serves on board of the International Federation of Robotics Research, and he is a fellow of the IEEE for his contributions in vision-based robotics. He served as Chair of the Computing Community Consortium from 2014 to 2016.