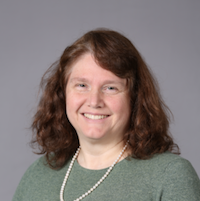 Dr. Holly Yanco is a Distinguished University Professor, Professor of Computer Science, and Director of the New England Robotics Validation and Experimentation (NERVE) Center at the University of Massachusetts Lowell. Her research interests include human-robot interaction, evaluation metrics and methods for robot systems, and the use of robots in K-12 education to broaden participation in computer science. Application domains for her research include assistive technology, urban search and rescue, manufacturing, and exoskeletons. Yanco’s research has been funded by NSF, including a CAREER Award, the Advanced Robotics for Manufacturing (ARM) Institute, ARO, CCDC-SC, DARPA, DOE-EM, ONR, NASA, NIST, Google, Microsoft, and Verizon. Yanco is Co-Chair of the Massachusetts Technology Leadership Council’s Robotics Cluster, served as Co-Chair of the Steering Committee for the ACM/IEEE International Conference on Human-Robot Interaction from 2013-2016, and was a member of the Executive Council of the Association for the Advancement of Artificial Intelligence (AAAI) from 2006-2009. Yanco has a PhD and MS in Computer Science from the Massachusetts Institute of Technology and a BA in Computer Science and Philosophy from Wellesley College