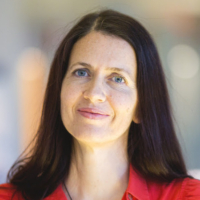 Rada Mihalcea is the Janice M. Jenkins Collegiate Professor of Computer Science and Engineering at the University of Michigan and the Director of the Michigan Artificial Intelligence Lab. Her research interests are in computational linguistics, with a focus on lexical semantics, computational social sciences, and multimodal language processing. She serves or has served on the editorial boards of the Journals of Computational Linguistics, Language Resources and Evaluations, Natural Language Engineering, Journal of Artificial Intelligence Research, IEEE Transactions on Affective Computing, and Transactions of the Association for Computational Linguistics. She was a program co-chair for Empirical Methods in Natural Language Processing 2009 and Association for Computational Linguistics (ACL) 2011, and a general chair for North American ACL 2015 and *SEM 2019. She directs multiple diversity and mentorship initiatives, including Girls Encoded and the ACL Year-Round Mentorship program. She currently serves as ACL Past  President. She is the recipient of a Presidential Early Career Award for Scientists and Engineers awarded by President Obama (2009), and was named an ACM Fellow (2019) and an AAAI Fellow (2021). In 2013, she was made an honorary citizen of her hometown of Cluj-Napoca, Romania.