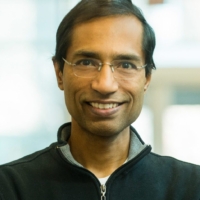 Rajmohan Rajaraman is a Professor and Associate Dean in the Khoury College of Computer Sciences at Northeastern University.  He is a member of the Algorithms and Theory group at Northeastern.  Rajaraman’s contributions to the field have been widely cited, specifically his research on distributed hash tables, which has been incorporated in peer-to-peer systems. He has obtained important results for fundamental combinatorial optimization problems, including facility location, edge-disjoint paths, multiprocessor scheduling, and dominating sets.

Previously, Rajaraman held positions as a research scientist at Cambridge Mobile Telematics, Google Research, and Akamai Technologies, and as a postdoctoral fellow at the National Science Foundation’s Center for Discrete Mathematics and Theoretical Computer Science (DIMACS).  Rajaraman was the recipient of an NSF Career Award and was a co-author of award-winning papers at ACM SPAA, ACM PODC, IEEE ICDCS, and ACM WiSec.  He has served as the program chair and track chair for leading conferences in parallel computing and distributed systems.  He is an Associate Editor for the journals Theory of Computing Systems and International Journal on Foundations of Computer Science.  He earned his Bachelor’s in Computer Science at IIT Kanpur in India, and his PhD in Computer Science at the University of Texas at Austin.