In 2009, an idea sparked that begged the question: what if there was a way to collect comparative data in service of rigorous program evaluation? That’s the question the Computing Research Association’s Committee on the Status of Women in Computing Research (CRA-W; now known as the CRA Committee on Widening Participation in Computing Research [CRA-WP]) and the Coalition to Diversity Computing (CDC) asked that ultimately started what is now known as the CRA Data Buddies Project. The Data Buddies Project has been running strong since 2010, and the conclusion of the fall 2020 survey cycle marked the 10th year of the Data Buddies Survey: the flagship initiative of the project. This article dives into some of the history of the Data Buddies Project and the CRA Center for Evaluating the Research Pipeline (CERP) while also highlighting the project over the years. The article concludes with a look into how the project operates today.

Is it all just history?

In 2009, the Data Buddies Project was just an idea—one that was far reaching and would require skilled researchers to manage. The goal was to collect survey data from undergraduate and graduate students in computer science degree programs, which would then turn into a comparison group for CRA-W/CDC program participants. The outcome would be rigorous program evaluation that compared participants to a national sample of non-participants.

CRA-W/CDC leadership and CRA researchers worked together to design a pilot survey they called the Data Buddies Survey (DBS). They designed the survey to ask questions related to students’ sense of belonging to computing, their skillsets and interest in research, and their academic and professional aspirations. Academic departments across the United States would distribute the survey to their students during the fall and spring semesters: the fall semester to survey continuing students and the spring for graduating students.

Although researchers at the CRA were able to run the survey from 2010 to 2012, it soon became clear that the Data Buddies Project would require a full-time staff to manage the survey. With a new Broadening Participation in Computing (BPC) Alliance award (CNS-1246649) in hand, the CRA-W/CDC Alliance used some of those funds to start a new research and evaluation center called the CRA Center for Evaluating the Research Pipeline (CERP). By the fall of 2013, CERP was fully staffed with researchers with social science backgrounds who could take full responsibility of the survey, its data, and resulting reporting. The CERP team refined components of DBS, recruited more schools to participate, and improved the department report in ways that further helped participating departments understand their students’ responses.

With the help of the CRA-W/CDC Alliance funding, CERP developed a sustainable infrastructure for DBS that would enable the project to continue for years to come. Part of that sustainable infrastructure included submitting proposals to NSF to sustainably support the project. In 2014, CERP was awarded an NSF grant (DUE-1431112) to begin collecting longitudinal data alongside the foundational data collection procedures established in 2011. CERP has been sustaining the Data Buddies Project with additional funds including a large NSF IUSE grant (DUE-1821136) received in 2018.

DBS over the years

As one might expect, DBS has grown in many ways since 2010. This section showcases the departments and student responses that have contributed to the overall success of the Data Buddies Project.

As mentioned earlier, the Data Buddies Project began with only ten institutions in 2010. Over a ten-year period (2010-2020), the number of participating institutions grew 1,350%! Out of the 234 computing departments that have been part of the project across the years, two stood the test of time and are currently the longest-standing partner institutions of Data Buddies: Columbia University and Duke University.

In Table 1 below, we showcase our long-standing partner institutions who joined in either 2010 or 2011 and have consistently participated in the project over the years except one or two years. In Figure 1, we also show the total number of DBS partner institutions from 2010-2020. Starting in 2015, CERP began highlighting “Elite” DBS partners who received a 20% or greater response rate. All active and elite DBS partners are included in Figure 1.

Note: (*) Longest-standing DBS Partner Institutions that joined in 2010 and never missed a year of data collection.

When DBS was first launched in 2010, it began as a spring semester survey for graduating computer science majors. A total of 386 senior undergraduates completed the inaugural survey across the ten partner institutions. From that point, both undergraduate and graduate students finishing their computing degree programs completed the spring DBS survey, which primarily collected data about their academic and professional aspirations.

To reduce the burden on departments distributing two surveys per year, CERP decided to retire the graduating student survey after the 2019 data collection wave. Unique measures collected from senior students were folded into the fall survey so that CERP could continue to learn about the career pathways of computing students in the field. Figure 2 below displays the responses collected through the spring survey from 2010-2019. 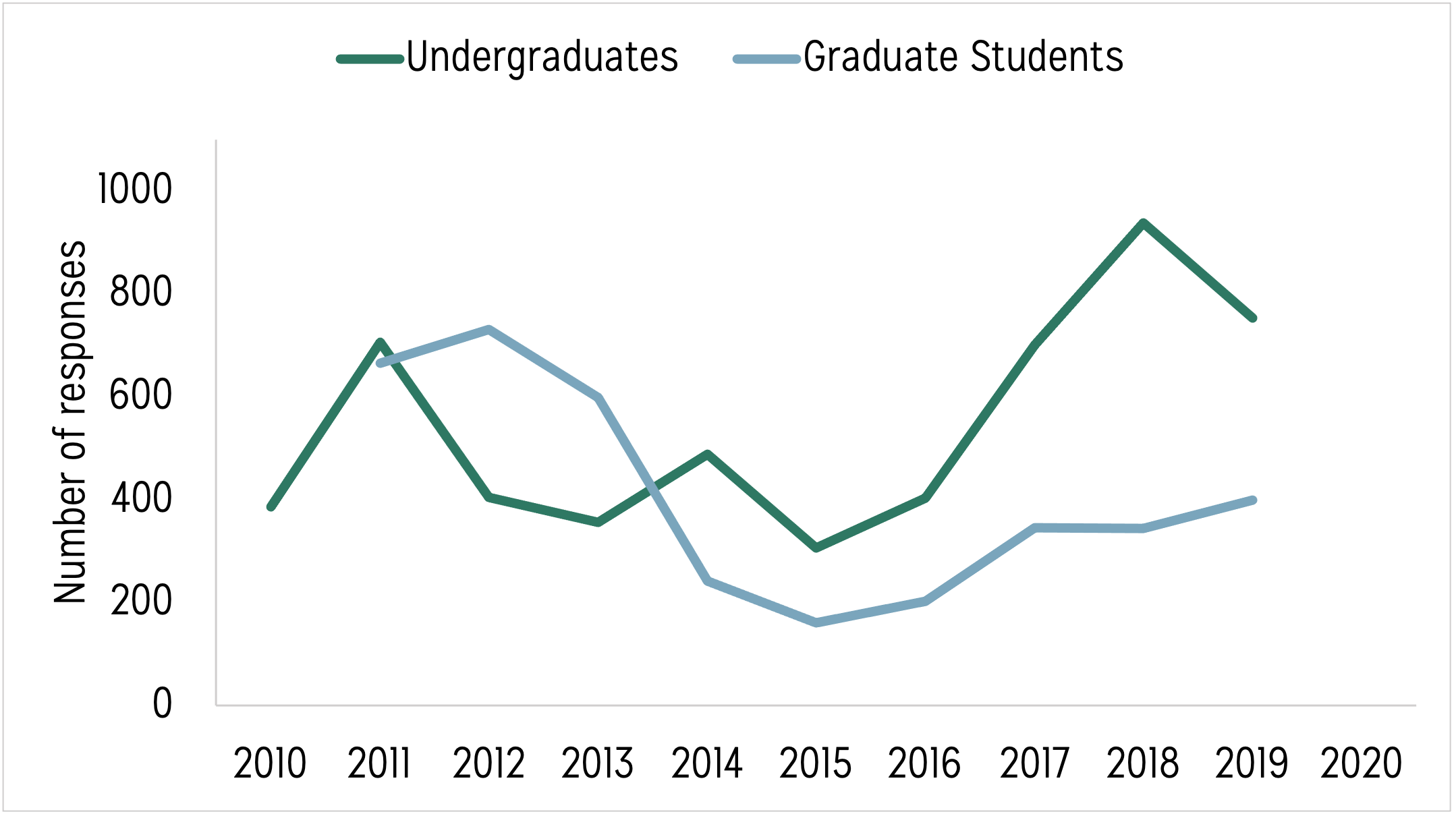 Now considered the flagship survey, the fall Data Buddies Survey has been actively collecting data from undergraduates and graduate students since 2011. Over time, the survey has grown to accommodate different types of students and even non-students, including alumni and professionals. One major change to broaden the survey was implemented in 2018 so that the measures included in the survey could be completed by both computing majors and non-majors – an important distinction that enabled departments to learn about the experiences of non-majors completing computing-related coursework. Although that option was somewhat available in prior years, the specific wording of many of the survey questions were difficult to complete by non-majors.

In 2019, another set of major changes were implemented to the surveys. Students in non-degree pathways such as certificate programs were provided a specialized pathway through the survey; in prior years, these non-degree students were not often eligible for the survey. The CERP team also began a pilot Data Buddies Survey for alumni and professionals – a non-student survey pathway to accommodate those who had already graduated and had entered the workforce. This additional pathway also opened doors for the CERP team to track more CRA-WP program participants. For example, participants of the CRA-WP Career Mentoring Workshops were now eligible to complete DBS.

Of course, these additional pathways meant more individuals were eligible to complete the survey. When we look at responses over time (Figure 3), we can see a jump in the number of responses to the survey in later years. These changes were important to make however, as the goal of DBS data is to provide as much information back to the community as possible about the state of higher education in computing, with a particular lens pointed toward understanding the experiences of students (and now individuals) in computing and technology fields. The integration of non-traditional pathways through computing into the survey was in service of this goal.

Figure 3. Undergraduate and graduate student responses to fall DBS from 2010-2020. 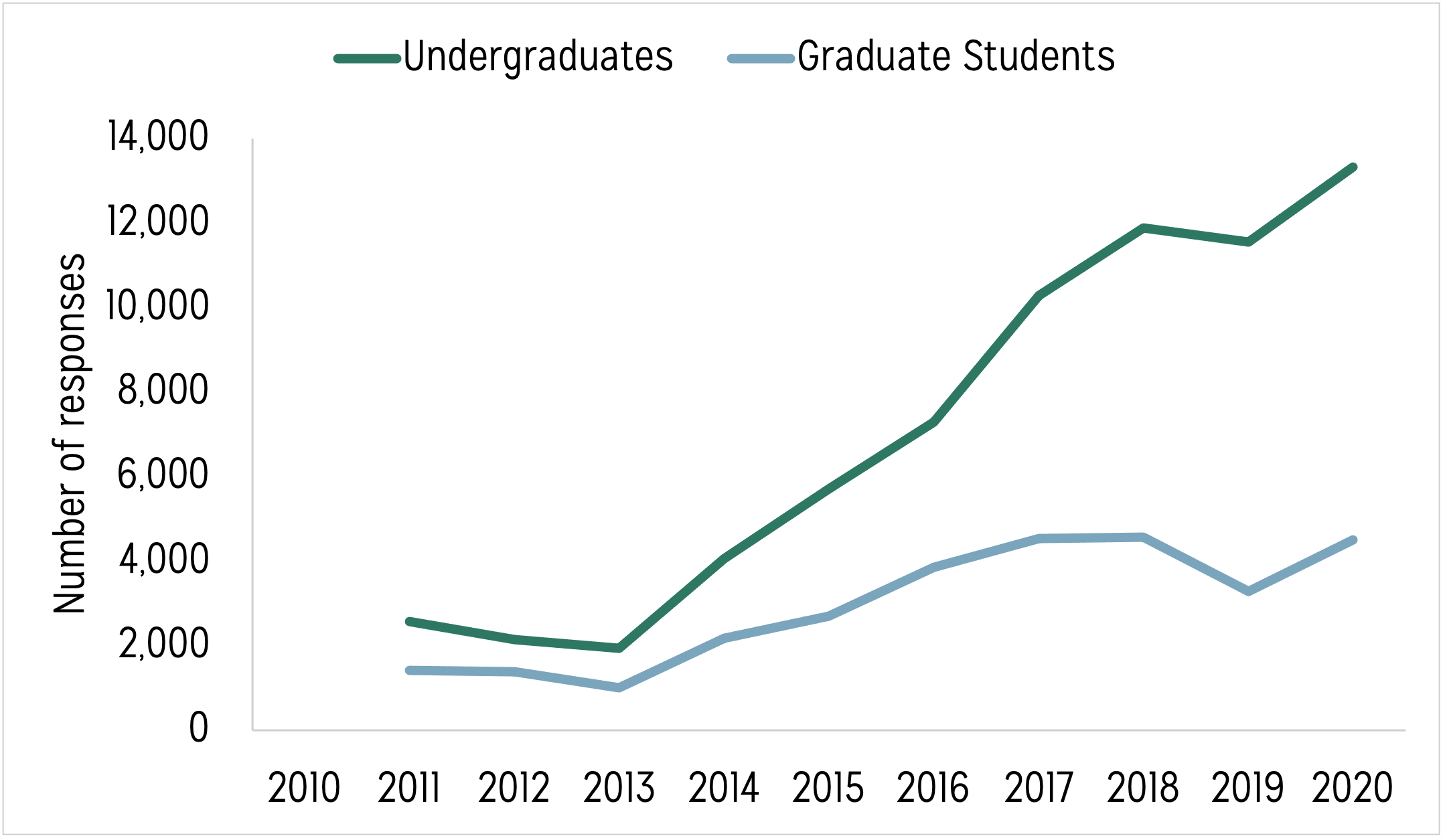 Note: Data were not collected from undergraduate and graduate students in 2010.

Figure 4. Average number of responses from undergraduate and graduate students per DBS partner institution from 2010-2020. 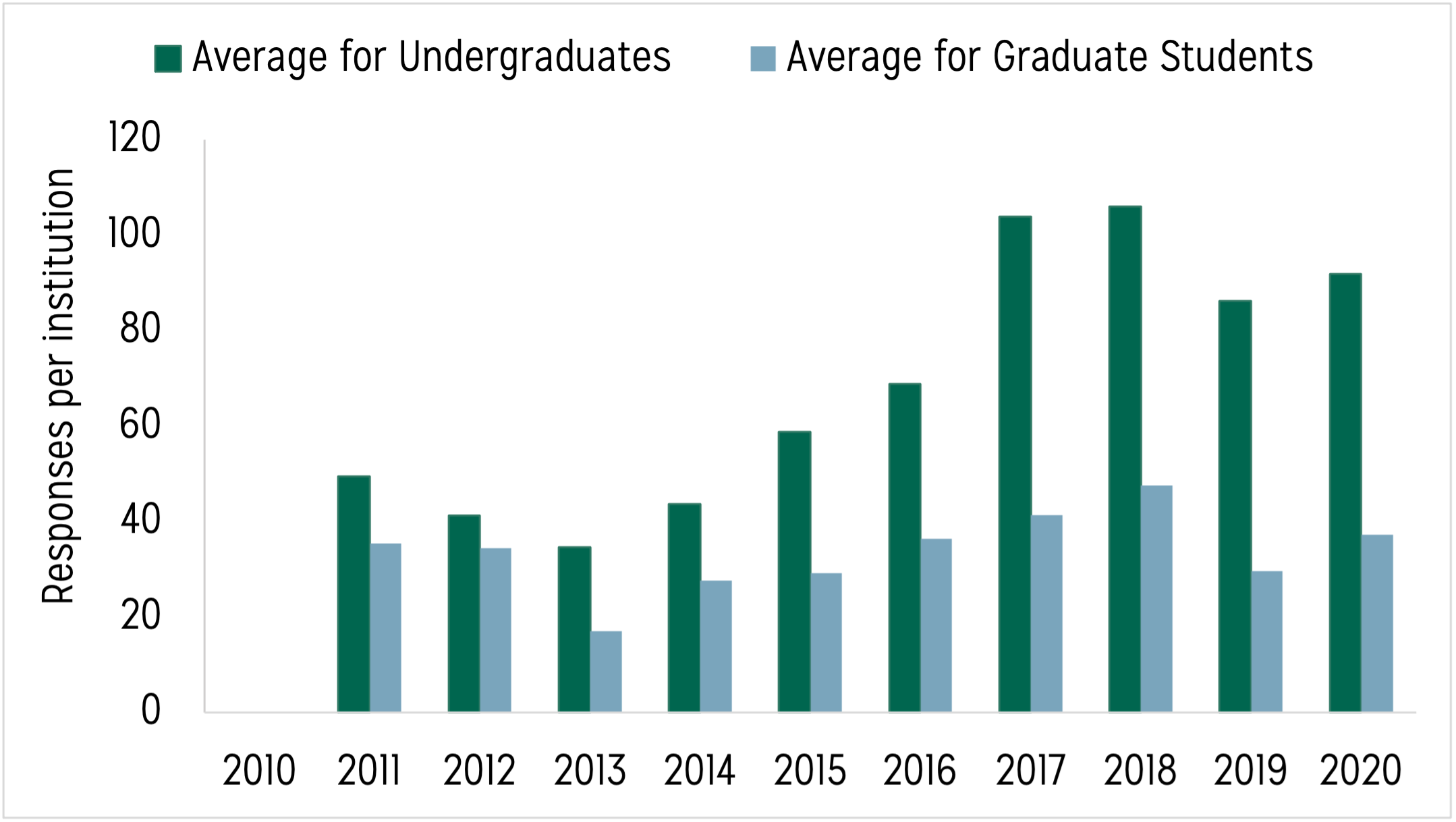 Today, DBS is running stronger than ever. DBS departments can request customized reporting with CERP’s new adaptive reporting infrastructure. CERP has also started reporting DBS data at an aggregated level through the new DBS Annual Report. As a next step, CERP will start reporting DBS measures longitudinally in an interactive report like the one available on an annual basis.

Finally, CERP recently overhauled the Data Buddies webpage to include more details about the project, how to get involved, and a comprehensive set of frequently asked questions. Departments can request copies of the DBS survey, and researchers can request a de-identified, aggregated dataset. CERP announced this update through a blog post featured on the brand new CERP Bulletin, the go-to resource for keeping up with CERP’s activities.

Is your department on the list of Data Buddies? If not, we encourage you to join today! To join the 2021 survey cycle, new departments should submit a volunteer form no later than November 1, 2021. This allows the CERP team to have time to engage with your Institutional Review Board (IRB), ensuring the project can move forward prior to the close of the survey.

About the author
Heather Wright serves as the Associate Director of the Center for Evaluating the Research Pipeline (CERP). In her role, Wright leads CERP’s evaluation efforts aimed at broadening participation in computing research and education. Wright also coordinates CERP’s various research initiatives and supports the continued sustainability of the center. She has been with CERP and CRA since 2013.