Over the past quarter, CRA and its committees have made great strides in our mission areas of leadership, policy, and talent development. With this message from the board chair, we begin a series of quarterly updates on CRA activities, outcomes, and opportunities for involvement. We’d like to share with you some of our recent activities, and give you some opportunities to get involved in the work of the CRA.

We are seeking nominations for our board of directors and are looking for individuals who have the time, energy, initiative, and resources to work on issues on behalf of the entire CRA community. Visit this page to fill out your nomination. We are also currently accepting nominations for two of our prestigious award programs: 2017 CRA Distinguished Service Award and A. Nico Habermann Award  (nominations are due December 9).

CRA’s Committee on Data Science built upon discussion and input from the session at the CRA Conference at Snowbird and used that input to compose CRA’s recently released position statement on Computing Research and the Emerging Field of Data Science.

CS for All and K-12 CS Framework

In January, President Obama announced his “Computer Science for All” Initiative. The main thrust of the initiative was to get money (specifically $4 billion in new mandatory spending and $100 million in new discretionary spending) to states and school districts to develop CS curriculum and teacher training for CS course work in K-12 classes. CRA Government Affairs reports that the initiative was met with bipartisan support but, unfortunately, no new money. Expectations within the community are that this will be a multi-year effort and planning is already underway about continuing efforts in the new Congress next year. The way the community was able to bring itself together to step up its advocacy in support of the President’s proposal was encouraging and bodes well for the future.

On September 14, CRA Executive Director Andrew Bernat represented CRA and its members at the White House Summit on Computer Science for All. He expressed his excitement about the incredible success of the initiative and explained CRA’s commitment to strengthening the computing research community by supporting the development of strong, diverse talent.

On October 17, a K-12 Computer Science Framework was announced for use throughout the country’s education system and was endorsed by CRA. Interested parties can download the framework, read the concepts and practices, and find more information on the K-12 CS Framework’s webpage.

The mission of the Computing Community Consortium (CCC) is to catalyze the computing research community and enable the pursuit of innovative, high-impact research. CCC conducts activities that strengthen the research community, articulate compelling research visions, and align those visions with pressing national and global challenges.

In 2015, the Computing Community Consortium conducted a survey and convened a round-table of industry and academic participants to better understand the landscape of industry-academic interaction, and to discuss possible actions that might enhance those interactions. The resulting report, The Future of Computing Research: Industry-Academic Collaborations, communicates the results of the issues discussed.

The report helped inform a CCC-sponsored program on Industry-Academic Collaboration, which  was implemented through the NSF-sponsored Big Data Regional Hubs. The goal of this program was to catalyze and foster partnerships between industry and academic research by creating mechanisms for early career researchers in academia and industry representatives to interact and to explore ways to work together. The program enabled shared learning and perspectives, access to problems and data, career training, and opportunities for long-term partnerships. Each hub was charged with addressing regional specific big data challenges. For example, as one of its CCC-sponsored activities, the South BD Hub ran the DataStart internship program, which paired graduate students from the South Regional Innovation Hub with data-related startup companies for three months.

On October 13, President Obama hosted the White House Frontiers Conference in Pittsburgh, which was co-hosted by the University of Pittsburgh and Carnegie Mellon University, and attended by hundreds of scientific leaders in our community. CCC Director Ann Drobnis and CCC Chair Elizabeth Mynatt both attended the event, and Mynatt described the presentations as “inspiring and thought provoking.” She was impressed with the scale of the scientific visions described and is now doubly committed to working on the tough challenges that face our community.

The CCC has several upcoming visioning workshops: Sociotechnical Cybersecurity Workshop 1, Discovery and Innovation in Smart Health and  Cyber-Social Learning Systems Workshop 2. Stay tuned for workshop reports based on our activities. To engage the community, the workshop organizing committee for Sociotechnical Cybersecurity released a call for white papers in order to both assist in organizing the workshop and in selecting attendees.

Are you helping organize a conference in the near future? Consider having a Blue Sky Ideas Conference Track. The CCC sponsors an initiative to bring special “Blue Sky Ideas” tracks to leading computer science research conferences. The goal of this initiative is to help conferences reach out beyond the usual research papers that present completed work and to seek out papers that present ideas and visions that can stimulate the research community to pursue new directions.

CRA is a trusted source of information—formally and informally—for Members of Congress and their staff, as well as the White House and the President’s Council of Advisors for Science and Technology.

At the end of September, Congressional leaders agreed to a continuing resolution (CR) through December 9, funding federal agencies at fiscal year 2016 levels. This CR keeps budgets flat at federal agencies, prevents them from starting new programs, and doesn’t provide a clear picture on how a final fiscal year 2017 budget will be resolved. The outcome of the election on November 8 is key to a resolution – whether to solve the outstanding budget questions during the lame duck session or extend the CR and punt appropriations to a new Congress next year.

At the end of June, the Senate Commerce Committee released its long anticipated version of the reauthorization of the America COMPETES Act. The House Science Committee introduced and passed their own reauthorization of COMPETES last year, called the America COMPETES Reauthorization Act of 2015 (H.R. 1806). The Senate language is relatively good, given the budgetary and legislative environment of Congress right now, and CRA officially endorsed the bill with a public letter. CRA Government Affairs continues to monitor the situation.

The CRA Policy Blog analyzed each of presidential candidate’s views on science policy. Hillary Clinton’s views position her as a strong supporter of the advancement and expansion of technology through education, entrepreneurship, and infrastructure, and are very similar to the Obama Administration’s efforts. Donald Trump’s views regarding the importance of the federal investment in research are not markedly different from a traditional GOP perspective, which emphasizes removing regulatory barriers to innovation and focuses on the government’s role supporting fundamental research.

On September 14, 21 computing researchers from CRA member institutions across the country visited Washington, D.C. to make the case for federally funded computing research in nearly 50 House and Senate meetings. Their message to Congress was simple: Federally supported computing research is vital to the nation’s future. CRA provides expert training, messaging, and materials. To participate in a future Congressional Visit Day, or visit your representative’s office, please contact Brian Mosley at bmosley@cra.org.

CRA-W has also been actively introducing new programs. The Virtual Undergraduate Town Hall, which began last fall, is a series of webinars that give undergraduates the opportunity to learn about a specific research topic in computing and ask questions about graduate school and other mentoring topics. Additionally, this summer, CRA-W initiated the Grace Hopper Celebration Research Scholars program, which brings undergraduate women with an interest in computing research to the annual Grace Hopper Celebration (GHC) and provides them with mentoring and networking opportunities. The inaugural class of CRA-W GHC Research Scholars includes 65 undergraduates from 52 different institutions across the U.S.

This November, CRA-W will host Early and Mid Career Mentoring Workshops (CMWs) in Washington, D.C. The Early CMW will bring junior researchers and educators together with women already established in their field to provide practical information, advice, and support to their younger colleagues. The Mid CMW will provide advice and mentoring to faculty members seeking promotion to full professor and researchers/technologists in industrial or governmental labs seeking promotion to the top of their institution’s technical ladder or entering upper management.

Applications are currently open for the 2017 Grad Cohort through November 30. Please share information about CRA-W opportunities with your students.

The CRA Education Committee (CRA-E) recently released a series of videos showcasing young researchers with Ph.D.s sharing what compelled them to pursue a doctorate and how they are using their advanced training in their work in industry. While many undergraduates understand that a Ph.D. is needed for a position in academia, these videos demonstrate how a Ph.D. can be useful in industry as well.

CRA-E also hosts a series of workshops on Engaging Undergraduates in Research at major computer science research conferences. The next workshop, which is entitled “Best Practices in Mentoring Undergraduate Research in Supercomputing,” will be held at Supercomputing 2016 on November 16 in Salt Lake City, Utah.

CRA-E is reviewing applications to the CRA Outstanding Undergraduate Researcher Award, and is accepting nominations for the CRA-E Undergraduate Faculty Mentoring Award (due November 28) and CRA-E Graduate Fellows (due January 30, 2017).

Do you have a research opportunity for undergraduates? Advertise it for free on CRA-E’s Undergraduate Listing Service, available on the Conquer site.

The CRA Center for Evaluating the Research Pipeline (CERP) is an evaluation and research center designed to help increase diversity in the field of computing research. CERP Director Jane Stout often gives presentations that share best practices to encourage people from underrepresented groups in computing to enter the field. In August, Stout gave an invited distinguished lecture entitled “New Research on Women’s Low Participation Rates in Science and Technology Fields” at the annual meeting of the American Psychological Association.

CERP collaborates with departments across the U.S. for its Data Buddies Project, which collects national survey data from computing students. It provides a customized department report to each department that sends out CERP surveys to their students. Then, CERP utilizes these large datasets for its unique evaluation method, and social science research. Is your department a Data Buddy? If not, click here to sign up and learn more. SAVE THE DATE: Data Buddies surveys will be distributed on November 12.

In each issue of CRN, CERP showcases the types of analyses it conducts by producing infographics. Check out the latest infographics below:

The CRA Taulbee Survey is in progress. If you are the academic unit head of a U.S. or Canadian department granting doctoral degrees in computer science, computer engineering, and/or information, you should have received emails about the survey. If you did not, please check with the CRA Director of Statistics Betsy Bizot at bizot@cra.org.

At the CRA Conference at Snowbird in July, the CRA Enrollments Committee, led by Tracy Camp, presented preliminary results from the enrollment survey conducted in fall 2015. The key message is that the enrollment surge is real, large, being felt at almost every institution in North America, and includes both majors and non-majors. The committee is working on final reports from the survey and expects to release them in November. Committee members Susanne Hambrusch, Tracy Camp, Sue Davidson, and Jodi Tims are also participating in a concurrent National Academies study on computer science enrollment.

It’s Not About the Money: Optimizing Academic-Industrial Partnerships 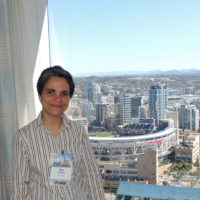