This article is published in the January 2006 issue.

This article reviews CISE funding actions and practices in the past year.

The National Science Foundation provides 86 percent of the federal funds for fundamental university research in computer science, according to the latest available figures. In spite of the demand this generates and the fact that our FY2005 budget was slightly less than FY2004, the “success rate” for competitive proposals submitted to CISE rose from 16 percent in FY2004 to 21 percent in FY2005.

The CISE budget has been relatively flat for the past two years and is unlikely to see substantial increases in the next few (See Figure 1). In this graph, funds devoted to cyberinfrastructure have been removed for all years.1 In FY2005, NSF suffered its first reduction in years, operating at 1.9 percent below the FY2004 level. CISE’s budget was approximately one-half percent below the FY2004 level. CISE funding in FY2005 was approximately 9 percent of NSF’s total budget and 11.6 percent of the research budget.

In FY2006, CISE’s budget is anticipated to be only slightly better than the FY2005 budget. The overall NSF budget has been appropriated by Congress and signed into law at a level 3 percent above the FY2005 level, but there may be an across-the-board rescission to help with the general Federal budget situation and funds have not been allocated within NSF yet. 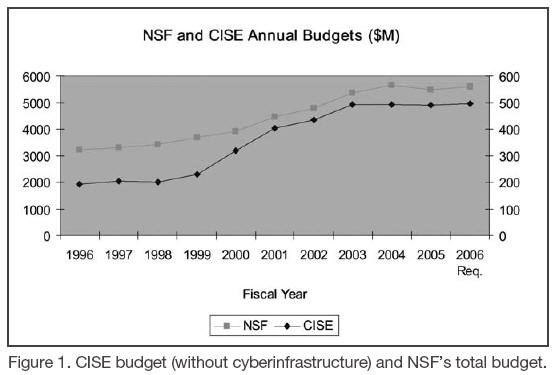 This budget situation comes after a period in which many universities increased the number of faculty in the areas of computer and information science and engineering. Each year from 2000-04, CISE saw an increase in the total number of people submitting a proposal (see Figure 2). Furthermore, during this time frame at least 1,000 people a year who had not previously applied to CISE for research funding submitted their first proposal. Approximately 16 percent of the new proposers submitted to the interdisciplinary ITR program, with the majority submitting to regular CISE programs. This growth includes newly hired Ph.Ds, people from industrial research labs taking faculty positions, and faculty whose research focus has shifted to CISE as the field of computer science has expanded. 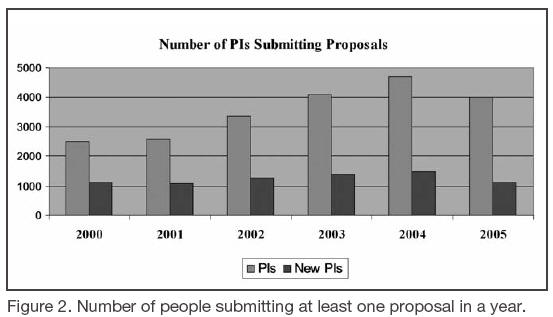 CISE has not imposed any Directorate-wide policies to deal with the dangerously low acceptance rates we have been experiencing, but each Division within CISE has taken steps to adjust its solicitations to improve the acceptance rates, given the budget trends and growth in the field.2 These steps have included limiting the number of proposals an individual may submit to a solicitation; using funds from two fiscal years to increase the amount of money available to some competitions; and collaborating with a number of agencies, including the National Institutes of Health, Department of Homeland Security, and Library of Congress, to fund projects of mutual interest. Furthermore, CISE is vigorously enforcing policies that prohibit the submission of nearly identical proposals to more than one competition simultaneously.

These policies are starting to have an effect. Figure 3 shows that in FY2005, CISE has increased the funding rate to 21 percent from a low of 16 percent in FY2004. By moving a deadline from winter to spring, Information and Intelligent Systems was able to fund an additional 65 proposals in FY2005 that could not be funded in FY2004. The number of CISE awards in FY2005 increased by close to 7 percent over the FY2004 level of 1,017, while the number of proposals decreased by more than 16 percent from the FY2004 level of 6,266. 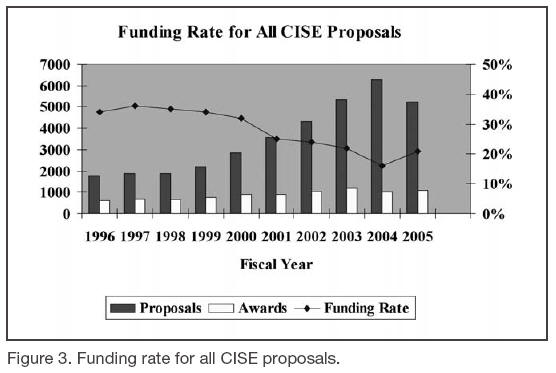 CISE’s funding rate has been below NSF’s since FY2000 and was beginning to drop precipitously. In FY2004, NSF’s funding rate was 24 percent, while CISE’s had dropped to 16 percent. The actions taken in FY2005 have been a factor in bringing CISE’s funding rate closer to the NSF average. This rate is still low by historical standards.

In FY2005, the average annual CISE award was $137K, a decrease from the FY2004 level of $147K. This decrease is primarily due to the end of the ITR competitions and the transitioning of ITR funds into CISE divisional programs and emphasis areas. Nevertheless, we are still funding some “center-scale” awards and intend to do more when funds are available. The large majority of CISE awards continue to be for three years’ duration. 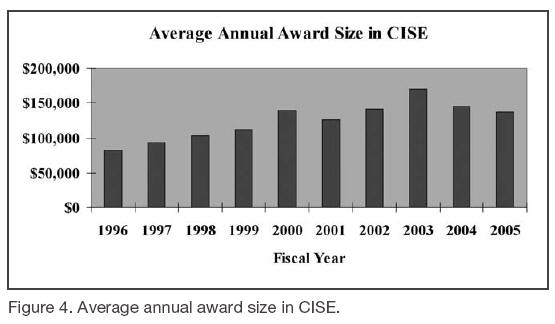 NSF and CISE seek to fund a diverse group of investigators. Table 1 shows the acceptance rates for various groups. For Female and Minority PIs, the funding rate is slightly higher than the CISE average. However, far too few of the applicants are women (15.2%) and minorities (4.1%). In FY2005, CISE released a broadening participation solicitation that has the goal of attracting more women and minorities to the field to try to improve this situation.

The table also shows that those people who have never been funded by NSF submit 41.6 percent of the proposals to CISE and have a lower-than-average funding rate of 14 percent. Another statistic shows that CISE does indeed fund proposals from a wide range of institutions. In FY2005, CISE funded 32.3 percent of the proposals submitted by PIs from one of the top 24 universities in the most recent US News and World Report ranking of Computer Science Graduate Programs, 22.9 percent of those from the next 24 universities, and 17.4 percent of the others. CISE participates in a number of regional outreach workshops to help familiarize potential PIs with NSF proposals, and we encourage PIs new to grant-writing to participate in a workshop.

CISE will continue to adapt its policies to improve its support to the community. However, our overall goal will remain the same: supporting the innovative computer science research and education projects that will have the greatest impact, while broadening the participation of all groups in computing.

Michael Pazzani is Senior Science Advisor and Rita Koch is Staff Associate for Budget and Planning in NSF’s CISE division.