This article is published in the March 2008 issue.

CRA’s Taulbee Survey of Ph.D.-granting Computer Science (CS) and Computer Engineering departments in North America has been conducted annually since 1974. Results from the most recent survey were provided to participants and CRA members in February. They will be published on CRA’s website (www.cra.org/statistics/) and in Computing Research News in May. Due to widespread interest, CRA releases data on undergraduate degrees early.

This article reports on CS bachelor’s degree enrollments and production among Ph.D.-granting departments in the United States since the late 1990s. Data are reported in both total numbers and medians per department as the latter helps limit the effect of variants in response rates. Results from the Taulbee Survey should be compared with data produced by the National Science Foundation (NSF), which surveys all institutions that grant CS degrees (whereas Taulbee is a survey of the doctorate-granting departments only). NSF’s most recent data are from academic year 2004/2005.1

According to HERI/UCLA, the percentage of incoming undergraduates among all degree-granting institutions who indicated they would major in CS declined by 70 percent between fall 2000 and 2005.2 Unsurprisingly, the number of students who declared their major in CS among the Ph.D.-granting departments surveyed by CRA also fell. After seven years of declines, the number of new CS majors in fall 2007 was half of what it was in fall 2000 (15,958 versus 7,915). Nevertheless, the number of new majors was flat in 2006 and slightly increased in 2007. This might indicate that interest is stabilizing.

The decrease in new majors has meant that the number of students enrolled in CS has fallen for several years. Between 2005-06 and 2006-07, enrollments went down by 18 percent to 28,675. Overall, enrollments dropped 49 percent from their height in 2001-02, while the median number of students enrolled in each department fell 53 percent since 2000/2001.

These declines have had a significant impact on degree production. Following several years of increases, the total number of bachelor’s degrees granted by Ph.D.-granting CS departments fell 43 percent to 8,021 between 2003-04 and 2006-07. The median number of degrees granted per department declined 39 percent (to 42). The sustained drop in total enrollments and student interest in CS as a major suggests that degree production numbers will continue to drop in the next few years. 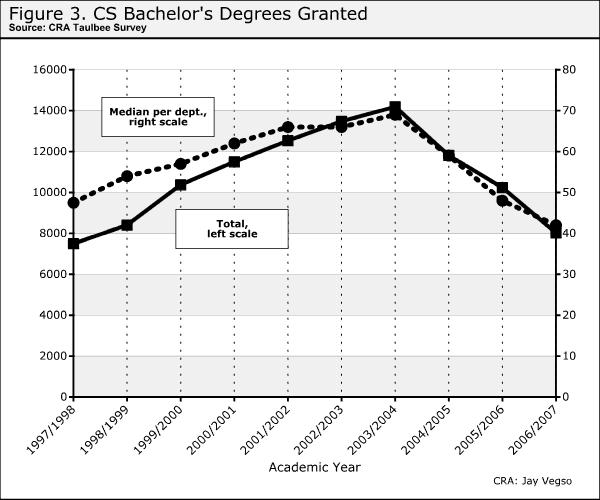