This article is published in the September 2012 issue.

Established six years ago through a Cooperative Agreement between CRA and the National Science Foundation (NSF), the Computing Community Consortium (CCC) has sought to serve as a catalyst and enabler for the computing research community, providing mechanisms to encourage the community to identify compelling research visions for the future of the field, all the while attracting bright young talent and fostering development of the next generation of leaders.  During this time, the CCC itself has evolved – from a startup-like organization into a much more stable, long-term enterprise that empowers the field broadly.  This past spring, the CCC received a positive review from an independent peer review panel commissioned by NSF, and it is anticipated that a new Cooperative Agreement with support for another four years will be signed early this fall.  So as we embark upon a new period, we would like to revisit our core activity – community-wide visioning exercises that bring together members of our community to coalesce around research visions – and describe ways in which you can get involved.

We have employed several mechanisms for encouraging the generation of bold new research challenges and opportunities for the field, particularly in the context of national priorities like healthcare, energy, transportation, education, and national defense:

This spring, the CCC funded Robin Murphy (Texas A&M University) and Trevor Darrell (UC Berkeley) to co-organize a workshop on computing for disaster management.  Together with a Steering Committee, they convened a group of 45 indivdiuals spanning computer science broadly – communications, social media, social science, sensors, visualization, human-computer interaction, artificial intelligence, robotics, high-performance computing, structural engineering, data mining, information retrieval, machine learning, geospatial databases, computing for economics, and game theory.  The primary goal was to formalize what we individually were seeing that made computing research for disasters unique. We each saw that disasters were more than an application area, yet required significant understanding of the larger socio-technical system in order to conduct research with broad impacts.  The resultant report, issued this summer, captures one vision of what it would take: a robust, multi-disciplinary community in which researchers partner with practitioners to tackle fundamental new research in socio-technical systems that enable decision making for extreme scales under extreme conditions.  The report describes what is meant by “critical real-time computing and information systems” (CRICIS), why it is different from existing research areas and paradigms, what its benefits to society and to science are, and what a broad investment portfolio and living roadmap facilitating the engagement of researchers from all disciplines might entail.

Like CRICIS, we have several visioning activities planned this fall, the majority of which have been inspired by proposals submitted by members of the computing research community. Check out the CCC Blog for updates.

How You Can Get Involved

To achieve its goals, the CCC relies heavily upon the participation of the broader computing research community.  Besides formulating a visioning proposal or white paper, or organizing a challenges and visions track at an upcoming research conference, here are three quick and easy things you can do today to become involved in CCC:

To learn more, check out a new brochure and video that we have developed describing the CCC and our various activities.  And please take a quick moment to subscribe to the CCC Blog, a constant source of news and information for and about the computing research community.
We hope to see you involved soon! 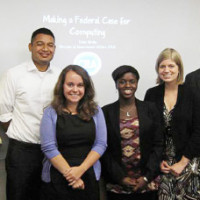 CRA Hosts 2012 Tisdale Fellows Lunch
Scroll to top
We use cookies to understand how you use our site and to improve your experience. By continuing to use our site, you accept our use of cookies.Accept Read More
Disclaimer
Privacy Overview