This article is published in the January 2015 issue.

This year’s nominees were a very impressive group. A number of them were commended for making significant contributions to more than one research project, several were authors or coauthors on multiple papers, others had made presentations at major conferences, and some had produced software artifacts that were in widespread use.

CRA gratefully acknowledges the support of Microsoft Research and Mitsubishi Electric Research Labs (MERL) who sponsor the Outstanding Undergraduate Researcher Award program in alternate years. Microsoft Research is the sponsor of this year’s awards. A list of the winners, runners-up, finalists, and honorable mentions appears below.

Emma Harrington is a senior computer science and economics double major at Williams College. Her research is on investigating what motivates people to produce free content online. She hopes this will shed light on why people contribute to public goods on the Internet. Recently, Emma submitted a poster to the CRA undergraduate research poster competition at Grace Hopper Celebration of Women in Computing and gave a short public presentation about her research. In addition to her research, Emma was a teaching assistant for multivariable calculus and captain of the Williams Varsity Softball team.

Urvashi Khandelwal is a senior in computer science with a minor in mathematics at the University of Illinois, Urbana-Champaign. Her research interests include modeling and mining large-scale entity-rich information networks, which can capture real world semantics. Her most recent project involved making high quality citation recommendations for a given scientific publication. In addition to her research, Urvashi has been a teaching assistant for the data structures course at Illinois since 2012.

Hyunsu Cho is a senior computer science and mathematics double major at Trinity College. His computer science senior project is on hypergraph spectral clustering on GPUs and image classification where he is developing effective learning algorithms suitable for parallel environments. Hyunsu has been a teaching assistant in the computer science department since 2012 as well as a research assistant working on several research projects in medical imaging and scientific computing.

Danfei Xu is a senior computer science major at Columbia. His research interests and contributions are related to sensory perception of robotic systems; in particular, tactile sensing, visual perception, and sensor fusion. Recently, he contributed to a research project related to robotic manipulation. The goal of the project was to have a robot pick up a garment. Danfei developed a “local grasp” function in which a robotic arm move along a fixed trajectory around the garment while recording the readings of distance sensor mounted under the arm. The local grasp function was able to reconstruct a local transverse section of the garment.

Danaë Metaxa-Kakavouli is a senior computer science and science & society double major at Brown University. Her senior honors thesis is on developing machine learning techniques to give sleep recommendations. In the future, she plans to continue using interdisciplinary methodologies and tools, anchored in computer science, to lead research that produces valuable data, user-facing technologies, and theoretical insight in Human-Computer Interaction. In addition to her research, Danaë has been a teaching assistant for a number of computer science classes, holding office hours and developing course materials.

William Rathje is a senior computer science and English literature double major at the University of Puget Sound. His senior project is on augmented reality and outdoor localization for mobile devices. William, and his team, developed an iPhone and Android app that provides worldwide outdoor localization using a custom GPS/compass senor-based augmented reality algorithm. In addition to his research, William is the lead tutor for the Center of Writing, Learning, and Teaching at the University of Puget Sound. He has worked with hundreds of students on writing and public speaking.

Brett Boston is a senior computer science major at the University of Washington. His research is aimed at using type systems and type interference to make it easier for programmers to guide the appropriate use of approximation. In addition to his research, Brett is currently a Coursera Teaching Assistant, working on an autograder for the Coursera programming languages course. This involves maintaining a system that can handle thousands of code submissions per week in a secure and reliable manner. 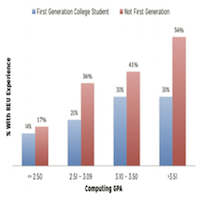 Call for CCC Council Nominations
Scroll to top
We use cookies to understand how you use our site and to improve your experience. By continuing to use our site, you accept our use of cookies.Accept Read More
Disclaimer
Privacy Overview