We are in the throes of another undergraduate enrollment surge. The number of new CS/CE majors in bachelor’s programs at Taulbee departments this year has reached the peak levels seen at the end of the dot-com era. While this is better news than the opposite (declining enrollments), it is critical that the field take into account how policies and efforts to manage the enrollment surge will affect groups that are under-represented in computing. The Taulbee Survey shows a three-year increase of approximately 61 percent in undergraduate enrollment at U.S. CS departments between 2010-11 and 2013-14. We also note that the booming enrollments are not limited to doctoral granting universities. For the past two years, ACM has sponsored a survey similar to the Taulbee Survey, but which collects data from Non-doctoral granting Departments in Computing (NDC). The most recent study included data from 164 institutions representing 302 programs at the bachelor’s level. Between 2012-13 and 2013-14, these institutions saw more than a 16% increase in CS degree production and over 7% increase in total CS enrollment.

How are Universities Accommodating the Undergraduate Boom?

At the 2015 ACM SIGCSE conference in March, the authors held a discussion with about 150 computer science educators to understand how universities are dealing with increasing enrollments. Three general approaches were presented (which are not mutually exclusive), including managing staffing, class sizes and formats, and administrative policies.

Each of these approaches has implications for managing departments; e.g., teaching assistants require training and management and charging student fees requires approval beyond the department. In addition, some of the approaches may not be feasible. For example, although we are producing new Ph.D.s at record or near record numbers, about 60% are going to industry. Meanwhile, graduate enrollments have been stable the last few years, which suggests that there is limited capacity to handle growing undergraduate enrollments via the hiring of new doctoral graduates. Furthermore, some approaches may have especially negative consequences for diversity.

The U.S. computing community has put enormous effort into diversifying the field. Diversity is a social justice issue given the huge industry demand and high salaries associated with the demand, but also critical for innovation and problem solving (as shown by numerous studies). Programs like the National Science Foundation’s Broadening Participation in Computing and code.org have made significant inroads into formal and informal education. The students interested in computing are now more diverse than ever, yet the way the enrollment boom is managed could divert promising undergraduates into other majors.

Enrollment caps can help departments reduce the number of students who take courses or declare a major. Some course enrollment caps are simply based on a first-come, first-served approach or in randomization, so that students have a more or less equal chance to be admitted into classes or the major. Yet many departments go beyond FCFS, to give priority to students who are willing to declare the major. Students who take computer science in high school are more likely to declare the computer science major, are more likely to be a white or Asian male, and are more likely to be from a school large enough to have computer science classes. In contrast, underrepresented students and those from high schools without computer science courses are increasingly intrigued by computing and want to try it out for the first time as undergraduates.Enrollment policies influenced by pre-college course-taking limits access by women, under-represented minorities, and rural (under-resourced) areas.

Charging differential tuition or fees is another way that departments can accommodate increased teaching staff and lab expenses. However, research shows thatdifferential costs are likely to more negatively impact students who are first in family to go to college or come from less affluent backgrounds.

Even when students can be accommodated, the need to scale course size may also negatively impact retention of under-represented groups in computing. Large lecture courses are less personal, with less faculty-student and student-peer interaction, two significant predictors of retention in computer science. Students can also have less information on which to judge their progress relative to their peers. In addition, when courses are large, it can be harder to establish ties with the peer networks that support learning and the development of identity as a person who belongs in the field. Women and under-represented minorities in computing also stand out as different and become isolated. Research shows that women leave computer science not because of their grades (which are typically higher than the men who stay), but because they are isolated, don’t understand their standing relative to peers, and feel the social climate is uncomfortable.

Some of the growth in interest in computer science appears to be tied to the availability of immediate, lucrative employment with a bachelor’s degree. For these students, the pipeline from undergraduate degree programs to graduate degree programs is likely to remain static. And, as mentioned, Taulbee data shows that graduate enrollments have been stable the last few years, with an increasing fraction of new graduate students from outside North America. Many attendees at our SIGCSE session, however, agreed that the current boom feels different than the dot.com boom. Specifically, SIGCSE panel attendees indicated that students taking computing classes during the dot.com boom seemed to mainly be interested in money, but now appear to be interested in computing. This interest is illustrated by the large increase in REU site applications seen by many universities, which indicates a graduate enrollment boom might be forthcoming.

Our field has faced booming enrollments twice in the past: in the mid-1980s and in the late 1990s. This one feels different to many of us. At the 2014 CRA Conference at Snowbird, we saw data from some universities that showed higher than ever demand for more advanced computing courses by students who were not computing majors. Since the previous surge, there has been a maturing of the computing disciplines of software engineering and information technology, and new areas such as security are on the rise. During the past decade, there has been an increase in the number of interdisciplinary programs that involve computing and demand for courses well beyond the introductory level. Students from all fields are much more aware of the power that computational abilities give to them within their chosen major. This is great news for the computing community. After the last boom, however, there was a considerable decline in gender diversity for both majority (e.g., white) and minority (e.g., Hispanic) populations. We need to be especially careful with our enrollment policies and practices right now, so that the computing community can benefit from the diversity that exists in the enrollment boom we currently face. 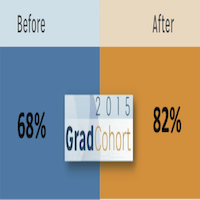 Terminal M.S. Students Who Participate in the CRA-W’s Grad Cohort Show Increased...
Scroll to top
We use cookies to understand how you use our site and to improve your experience. By continuing to use our site, you accept our use of cookies.Accept Read More
Disclaimer
Privacy Overview