This article is published in the October 2015 issue.

An opinion piece published in The New York Times entitled “Are College Lectures Unfair?” provides a clue to the persistent gender and race gaps in computer science [1]. The author, Annie Murphy Paul, poses several provocative questions: “Does the college lecture discriminate? Is it biased against undergraduates who are not white, male, and affluent?” She proceeds to explain how a growing body of research shows that “the lecture is not generic or neutral, but a specific cultural form that favors some people while discriminates against others, including women, minorities, and low-income first generation college students.” Paul then contrasts the lecture with active learning, where students construct knowledge through hands-on problem solving, engaging with the material through group work, collaborative thinking, and where students anchor their learning in knowledge they possess and cultural references with which they are familiar. For educators of computer science, a field that has been largely taught through lecture and direct instruction, research supporting active inquiry-based learning should give everyone pause to reflect and discuss [2, 3]. 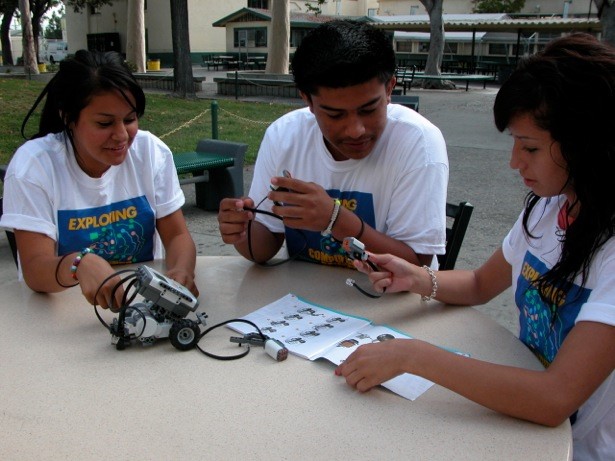 Our program, Exploring Computer Science (ECS), was designed to democratize computer science knowledge at the high school level, making computer science available and engaging for all students [4, 5]. ECS is very much based on active inquiry-based instructional philosophy. ECS classrooms are lively, noisy places where students are actively investigating the problem solving of computational thinking and the societal implications of computing. Projects in human-computer interaction, problem solving, Web design, introduction to programming (using Scratch), computing and data analysis, and robotics are contextualized in issues that are meaningful for students. They are tasked with activities such as finding the shortest carpool route for a group of students after school (introducing the concept of optimization and the use of minimal spanning trees for an approximate solution) and programming animations and websites that address community issues in the school neighborhood. ECS is committed to bringing rigorous and engaging computer science to schools with high numbers of students of color in underserved communities. We are committed to assuring all students, of all genders and races, are enrolled and feel they have a place in the computer science learning community.

Key to our ECS program are teachers. The ECS program combines instructional curricular materials with an ECS teacher’s professional development program. The two-year program immerses teachers in active inquiry and equity-based instructional practices. Teachers practice and reflect on teaching ECS lessons; they also discuss the findings in Stuck in the Shallow End: Education, Race, and Computing [6] about how to change the structural inequities and the biased belief systems that set up obstacles to broadening participation in computing in their schools.

ECS began in Los Angeles (L.A.) in 2008, with support from the National Science Foundation, but is now a rapidly expanding national program. In summer 2015, we participated in professional development of more than 700 teachers committed to teaching ECS beyond L.A. next year. In collaboration with partners including Code.org and Teach for America, the program has dramatically scaled to major urban school districts in the country including Boston, Broward County in Florida, Chicago, Houston, Los Angeles, Milwaukee, New York City, Seattle, and schools in Silicon Valley [7].

All ECS programs are expected to assure that the student demographics reflect the school population. In L.A., approximately 2,500 students are enrolled in ECS annually, with the student ethnicity demographics reflecting those of the district. In 2014-2015, ECS students were 74% Latino/a, 9% White, 8% African-American, 7% Asian, and 2% other. The female enrollment for the last several years has been between 42-45%. This is a dramatic contrast to national statistics for Advanced Placement computer science (CS) that show only 13% African-American and Latino/a combined, and only 20% were female in 2014 [8].

Challenging the Biases About Who Can Do Computer Science

Data from external evaluations of the ECS program have shown that, after taking ECS, students report an increase in interest and knowledge of CS. This year, students displayed a roughly one standard deviation increase in their self-reported knowledge at the end of the school year. Also, this year’s data shows that 88% of the students would recommend ECS to another student.

What is also noteworthy is how these gains differ between female and male students. Although all students showed a marked increase in self-reported knowledge, gains are especially large among female students. In the 2014-2015 school year, the gender gap in reported CS knowledge at the beginning of the year shrunk by 43% at the end of the school year, a finding that has been consistently replicated in previous annual evaluations. Female students’ subjective interest in CS also increased dramatically, with the interest gap between male and female participants closing by approximately 53% at the end of the school year. 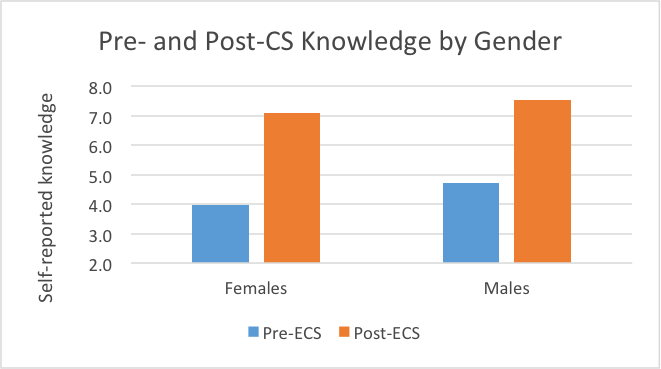 We theorize that these findings are explained, in part, by ECS teacher initiatives to challenge prevailing stereotypes and create CS classrooms where all students, regardless of race or gender, are believed to be capable of doing the work, and where a “growth” rather than a “fixed” mindset is established. We hypothesize that this creates a special boost to female students’ engagement as they began the course with a lower level of confidence because of societal biases, more mixed expectations, and therefore further benefit from the impact of such a supportive and inclusive classroom culture. As explained by Stanford University psychology professor Carol Dweck [9], increasing diversity requires a “growth” mindset, which centers on a belief that all students with quality education can grow in their capacity and engagement. Yet, traditional CS classrooms have been infused with what Dweck calls a “fixed mindset”: the belief that innate ability is static and set. Our research in Stuck in the Shallow End showed how a fixed mindset identified White and Asian males as having this “innate” talent, whereas we discovered this to be associated with “preparatory privilege,” such as home resources that provide a jump-start into computing, along with parental and social group support [6].

In the documentary “CODE: Debugging the Gender Gap,” [10] Dweck associates the drop in female enrollment in computer science in the mid-80s with the rise in identifying “nerd geniuses” with the “boy wonder” innovators of technology. To probe students’ stereotypes and mindsets about CS and how these might change during the ECS course, we asked students, “What might it mean to think like a computer scientist?” We posed this question at the beginning of the year, when we thought their beliefs would be mostly informed by a fixed mindset, the media, and cultural stereotypes, and we asked them again at the end of the school year, when we thought their beliefs would be more grounded in their ECS learning.

Using text-analysis software, students’ answers were coded for whether they answered the question using stereotype-consistent words like “genius,” “intelligence,” and “smart.” Their answers were also coded for how often they used CS-related words like “programming,” “solving,” and “analysis.” The results of these analyses, which averaged more than 1,000 students, are depicted in Figure 2 below. They illustrate that whereas students at the beginning of the year were more likely to use stereotype-consistent words than CS words, by the end of the school year that pattern flipped, such that students were more likely to use CS words and less likely to use stereotype-consistent words. We would like to explore this research further and hope to strengthen the influence of ECS to replace their media and culturally generated conceptions of CS with actual experience and success in CS contexts using equity-based instruction.

Figure 2. Percentage of total words written that were either CS-related words or words related to intelligence stereotypes at pre- and post-survey administration 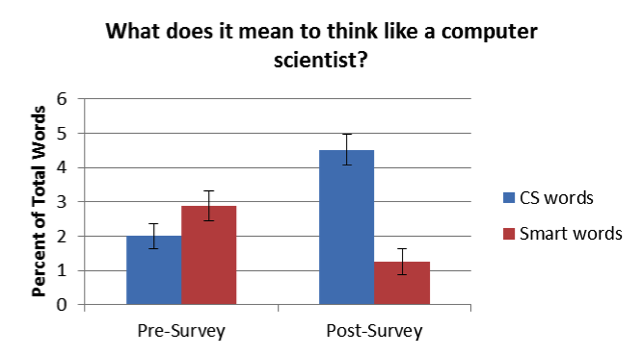 Equity Must Be Constantly and Pro-Actively Monitored

All broadening participation in computing programs must make choices about which students, schools, and school districts to work with, and these choices are connected to values, goals, and strategies. In ECS, we work to democratize computer science knowledge for all students. We work to assure that the ECS program exists in schools that are commonly low-resourced, and with high numbers of African-American and Latino/a students, assuring access for students who have been previously denied learning opportunities. This requires vigilance about the fuller social reality of schools, knowledge about educational reforms, and how CS initiatives fit into the larger picture of students’ education. This also requires knowledge about culture, identity, and the best instructional methods for students who have been traditionally pushed away from computer science learning [12].

There is a misleading belief among many that equity in CS education will just trickle down if you increase student enrollment. But increases in AP CS course-taking over the last years, without any significant uptick in diversity, shows otherwise [6]. In fact, our work on this issue has demonstrated how programs must constantly and proactively monitor recruitment, expansion, and equity because in computer science scaling up could readily slide backwards and mirror the field’s current race and gender gaps. Therefore, as we scale, we must measure our success not solely on numbers but on the quality of instruction, classroom culture, student learning, and the increasing engagement of students who have been traditionally underrepresented in computer science [11].

Jane Margolis is a senior researcher at the UCLA Graduate School of Education and Information Studies.

Joanna Goode is an associate professor of education at the University of Oregon, College of Education.

Kevin R. Binning is an assistant professor in the department of psychology and a research scientist in the Learning Research and Development Center at the University of Pittsburgh. 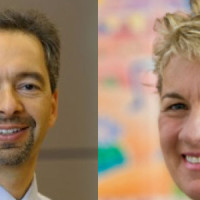 Excitement Around K-12 CS Education, but There’s Work to be Done by the CS...
Scroll to top
We use cookies to understand how you use our site and to improve your experience. By continuing to use our site, you accept our use of cookies.Accept Read More
Disclaimer
Privacy Overview