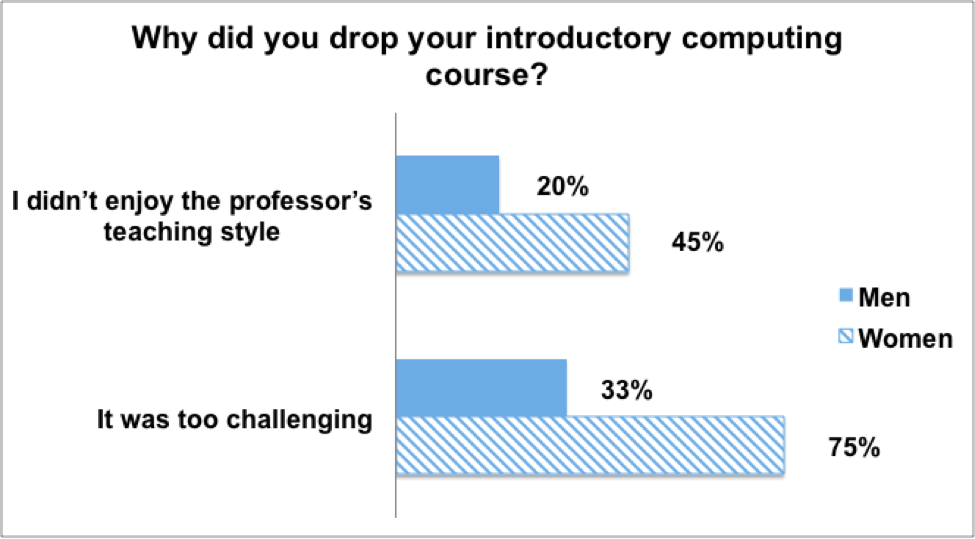 CERP recently collected data from Intro CS students as part of the “booming enrollments” research underway at the CRA. Within this dataset, a sample of undergraduate students (N = 50) who had recently dropped an Intro CS course reported their reasons for doing so. Women were significantly more likely than men to report they did not enjoy their Intro CS professor’s teaching style, and that the course content was too challenging, p < .05. These findings suggest that the “weed out” technique in Intro CS may have a more negative impact on women than men, and that the current “boom,” if left unchecked, has the potential to impair diversity efforts in CS.

Notes. Data were collected from 2,477 undergraduate Intro CS students as part of the Data Buddies initiative in fall 2015. Of those students, 2% (N = 55) indicated that they had recently dropped their Intro CS course. Of those 55 students, 30 were men, 20 were women, and 5 did not indicate their gender; the five students who did not indicate their gender were not included in the current analyses, rendering N = 50. Of the 50 students in this analysis, 50% were computing majors, and 50% were non-computing majors; 88% of students were attending Ph.D.-granting institutions, and 12% were attending M.S.-granting institutions; 24% were Asian/Asian American, 10% were African American/Black, 6% were Hispanic/Latina/o, 42% were White, 14% were Mixed ethnicity/race, and 4% did not indicate an ethnic/racial identity. Students were asked Why did you drop your introductory computing course? and indicated whether the following reasons applied to them using a Yes/No response: I didn’t enjoy the professor’s teaching style; It was too challenging. Chi-squared tests indicated the gender differences depicted in the graphic above were significant, p < .05.

This infographic is brought to you by the CRA’s Center for Evaluating the Research Pipeline (CERP). CERP provides social science research and comparative evaluation for the computing community. To learn more about CERP, visit our website at https://cra.org/cerp/.

Want to explore the Data Buddies data?
Scroll to top
We use cookies to understand how you use our site and to improve your experience. By continuing to use our site, you accept our use of cookies.Accept Read More
Disclaimer
Privacy Overview