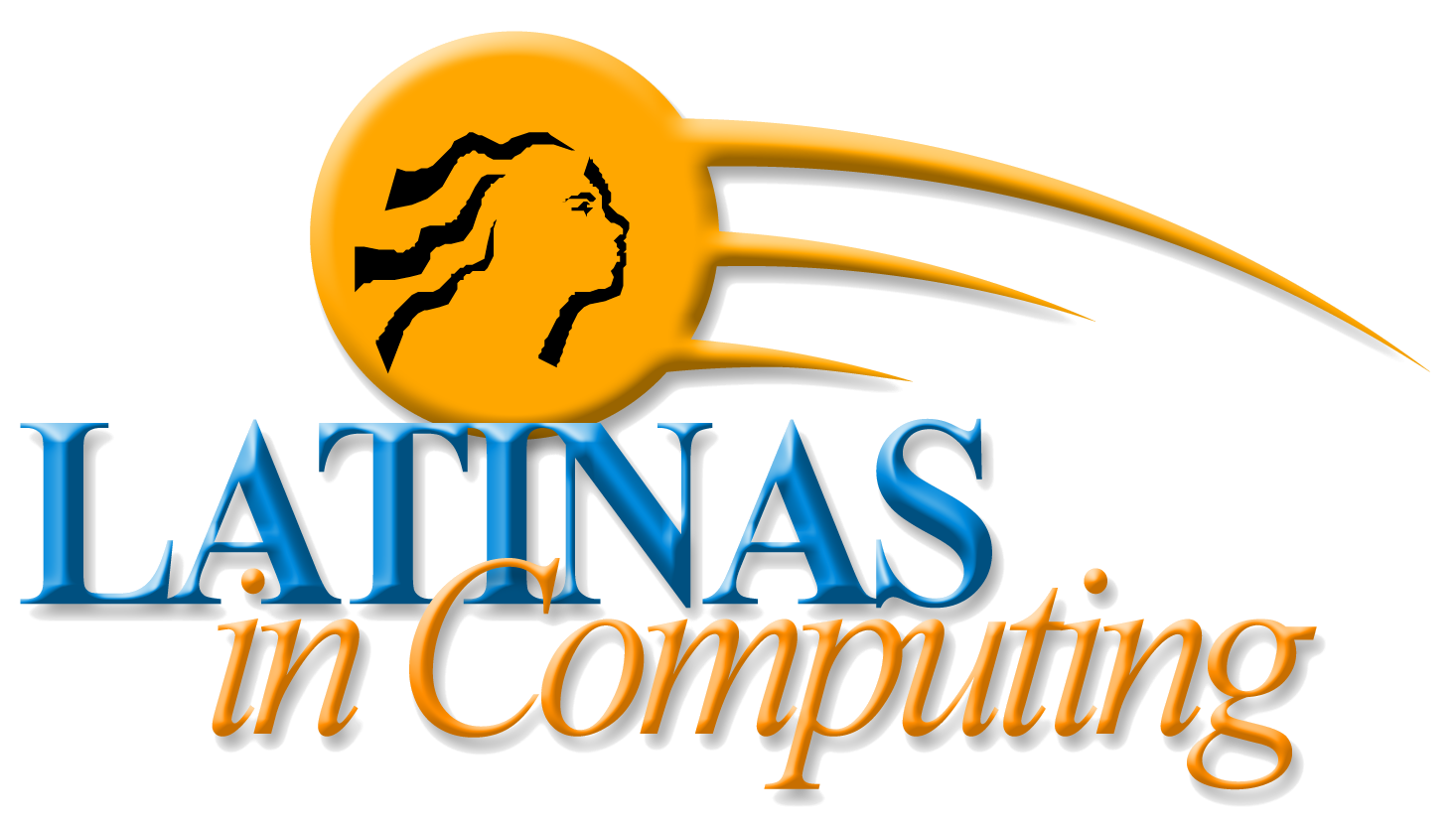 The Latinas in Computing (LiC) community was established with the help of The Anita Borg Institute for Women in Technology (ABI) at the 2006 Grace Hopper Celebration of Women in Computing (GHC). Recognizing the status of Latinas as a double minority in North America, this community defines and implements strategies to improve the participation of the current and next generations of Latinas in technology. These dual strategies complement the work done by the Coalition to Diversify Computing (CDC) that focused on the recruitment and retention of minority students in computing-based fields in North America, and the work done by the Computing Research Association’s Committee on the Status of Women in Computing Research (CRA-W) to grow the research pipeline of women in computing. National Science Foundation (NSF) data shows Hispanic or Latino enrollment increased from 7.2% in 2002 to 9.9% in 2012 [1], but the hiring of underrepresented minorities seems to be “stuck in neutral.” [2]

What about Latina participation in computing outside of North America? Recent figures show an overall increase in female participation in the Latin American labor force, reaching 52.6% in 2015 [2]. However, existing gender stereotypes in the region, like the expectation that women should be primary caregivers, as well as a lack of professional development opportunities, means that women in Latin America are shying away from STEM careers like computing. Compared to North America, [3] we have much work ahead of us in Latin America; our governments have only just started focusing on improving female participation in STEM careers as critical safety issues like violence against women have priority, leaving behind education and other initiatives, especially for women in STEM. Several programs that target the introduction of STEM topics to K-12 girls have appeared, like Digigirlz and Epic Queen. However, these programs have not been systematically applied and adopted within the region. In the case of higher education, some countries and organizations offer scholarships to study abroad, such as CONACYT in Mexico, Colfuturo in Colombia, and Pronabec in Peru, in order to encourage female and male students to pursue their studies abroad and then contribute back to their country.

What can a U.S.-based organization like LiC do to improve the female participation in computing in Latin America? Like many LiC members, the authors of this article met at a Grace Hopper Celebration. We are both Latin Americans that decided to continue their graduate studies in North America (Natalie at the Carnegie Mellon University, Jocelyn at the University of Toronto). We both returned to Latin America after completing our studies: Natalie to industry and Jocelyn to academia. This put us in a unique position, allowing us to leverage our personal networks to reach a larger audience within Latin America. 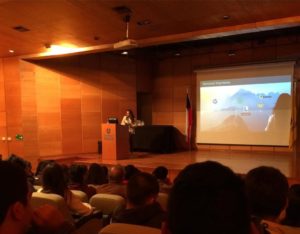 After almost two years of planning, the result was LAtINiTY, the first conference for Latin American Women in Technology, held in Santiago, Chile during November 2015. Our goal as general co-chairs of this conference was to bring together people and organizations from all over Latin America to discuss the role of women in computing in the region, as well as issues affecting women in technology. Those organizations include Women in Technology, Girls in Tech, Epic Queen, MenTe, Sula Batsu, Ada ITW, Rails Girls, Codies, Mulheres Na Computação, and Technically Speaking, among others. We also wanted to inspire the next generation of Latinas, giving participants a platform to show their work and to network with women in the region that share their interest and passion for technology. 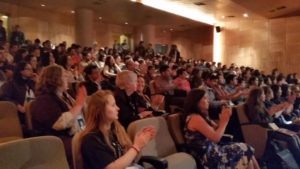 We are quite pleased with our experience in Chile. With more than 100 conference registrants, and more than 400 attendees from 14 countries–including a 6% male representation–the conference was conducted in three different languages (Spanish, Portuguese and English) since we wanted to enhance participation of native Spanish and Portuguese speakers and also expose them to international presenters and help them discover new opportunities in academia and industry, worldwide. Our call for participation was quite successful for a new conference; we accepted 51 talk proposals in three tracks: academic, industry, and society. The purpose of the academic and industry tracks was to give women in these areas an opportunity to present projects that they are leading or working on. The society track let people and organizations showcase initiatives carried out during 2014-2015 to promote the participation of women in computing in Latin America. 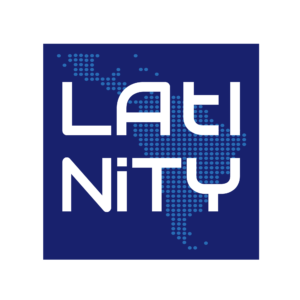 A post-conference survey showed that 82% of the surveyed LAtINiTY attendees rated the conference as Very Good/Excellent, and 91% are Likely/Extremely prone to attend future editions of this conference. We believe that our success can be explained by several factors. First, LAtINiTY 2015 was organized as part of a larger conference, Jornadas Chilenas de Computación, an annual conference that has been hosted in Chile for more than 30 years. This meant that academic and student speakers could send papers to co-located workshops and thus obtain funding from their universities to cover the costs of travel to LAtINiTY. We also had high-quality keynote speakers and panelists, which included renowned women from Microsoft, Facebook, and Oracle.

To enhance the experience of the attendees, we also hosted several additional activities. Our Platinum and Gold sponsors participated in a career fair, and senior women participated in a senior technical women panel, providing insightful advice to students and young professionals. Selected students participated in a student research competition, presenting their work in a plenary session, with an audience award for the best talk. Two renowned entrepreneurs and angel investors hosted a workshop for novice entrepreneurs, answering the type of questions that usually arise during the early stages of new projects. This workshop complemented the Product Visioning Challenge in which students teamed up at the conference to work on devising tech solutions to specific problems that affect Latin American women. We also arranged a screening, for the first time in Latin America, of the documentary “CODE: Debugging the Gender Gap,” which exposes the dearth of American women and minority software engineers.

We could not have accomplished all this without our lead volunteers: Luza Jaramillo (general advisor), Valeria Herskovic (academic chair), Rosa Enciso (industry chair), Cecilia Bastarrica (society chair), Alejandra Acuña (local chair) and Carolina Hadad (scholarship chair). They coordinated the work of approximately 50 female and male volunteers from all over Latin America. We also had the generous support from Microsoft (Bing and Azure), Google, The Anita Borg Institute, Women Techmakers, ThoughtWorks, The Institute for Advanced Analytics, and ACM-W. This funding meant that we could provide scholarships to several outstanding students from the region, as well as offer some travel and registration scholarships to professors and professionals.

We still have a lot of work ahead of us. For starters, we want to make LAtINiTY an annual conference, with each year’s event being hosted in a different Latin American country. Leveraging the community that grew around LAtINiTY 2015, reflected in the thousands of hits and hundreds of women and men followers that LAtINiTY has attracted on the various social media platforms, we launched a call for organization. As a result, a team from Arequipa, Peru is already organizing LAtINiTY 2017, and 2018 will find us in Bogota, Colombia. We hope that LAtINiTY will be a rallying point for women in computing, empowering them to use technology to improve the lives of people throughout Latin America.

But we also have to think globally, since there is a high level of migration within Latin American countries and between Latin America and the U.S. CRA-W and ACM-W [4,5] have made important inroads into improving the awareness of gender issues in computing, but have low visibility within the region. For example, there are only 3 active ACM-W student chapters in Latin America (150 active chapters exist worldwide) [6]. How can we work with these organizations to bring programs like the CRA-W Grad Cohort Workshop [7] and ACM-W Student Chapters and Celebrations [8] to Latin America? It is time to transcend geographical boundaries and address these issues as a global community.

The LAtINiTY Organization Committee can be contacted at www.latinity.info and latinity@latinity.info. LAtINiTY aims to provide opportunities for organizations like companies and universities to recruit talent, and to give attendees firsthand information about those opportunities.

Natalie Gil is a Sloan Fellow at the Massachusetts Institute of Technology. Jocelyn Simmonds is an assistant professor of computer science at the University of Chile.

[1] NSF Bachelor’s degrees awarded in science and engineering, by citizenship, ethnicity, race, and sex of recipients: 2002–12.

[7] About the CRA-W Grad Cohort Workshop. 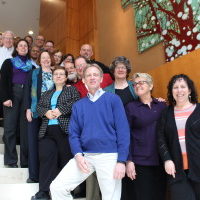 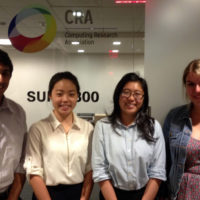 Eben Tisdale Public Policy Fellows Visit CRA Government Affairs Office
Scroll to top
We use cookies to understand how you use our site and to improve your experience. By continuing to use our site, you accept our use of cookies.Accept Read More
Disclaimer
Privacy Overview