Across North America, universities and colleges are facing a significant increase in enrollment in both undergraduate computer science degree programs and courses. The current enrollment surge has exceeded previous booms, and there is a general sense that the current growth in enrollment is substantially different than the growth in the mid-1980s and late 1990s.

In early 2015, the Computing Research Association (CRA) created a committee to investigate increasing enrollments. As part of this effort, an institutional subgroup of this committee developed a CRA Enrollment Survey, which was sent in fall 2015 to academic units with a computer science undergraduate degree program, in parallel with the annual CRA Taulbee (for doctoral-granting units) and ACM NDC (for non-doctoral granting units) surveys. The goal of the survey was to better understand enrollment trends and their impact.

The survey addressed these high-level questions:

We are grateful to the 134 doctoral-granting units and 93 non-doctoral granting units that responded to the CRA Enrollment Survey. The collected data is extremely rich, and allows us to consider a unit’s context (e.g., size, public or private, etc.) and available resources when studying the impact from enrollment growth.

One section of the survey requested that responders provide detailed demographic data on students enrolled in four representative CS courses: an intro-level course mainly for non-majors, an intro-level course mainly for CS majors, a mid-level course, and an upper-level course. Data was requested on these courses across three different time periods (2005, 2010, and 2015). We are not aware of any other national data set offering this level of detail on changes in computer science enrollments. The CRA Taulbee survey has added questions to its survey in order to continue collecting this type of data.

The enrollment growth in the mid-1980s is sometimes referred to as the “PC boom” and the enrollment growth in the late 1990s is sometimes referred to as the “dot-com boom.” CRA Conference at Snowbird attendees in 2016 suggested that we are currently in “Generation CS” where CS enrollments across the country are surging due to the pervasiveness of computing in today’s society. We, therefore, gave this name to the CRA enrollment report. Generation CS: CS Undergraduate Enrollments Surge Since 2006 will be available from the CRA website soon, and comments will be supported for those interested in discussing the report and its implications.

This report consists of six sections and three appendices, as we present and analyze the data collected from the CRA Enrollment Survey. Section A provides a project overview. Section B considers the phenomenal growth of computer science majors since 2006 in North America (e.g., the number of CS majors enrolled at North American doctoral[1]-granting units has more than tripled since 2006); furthermore, the data indicates that continued growth is likely. Section C considers the phenomenal growth of nonmajors taking computer science courses and discusses the data units reported on the increase in computer science minors.

We discuss diversity in Section D. Many members of the computer science community are very concerned about the impact of the current enrollment surge on diversity, as we learned several hard lessons regarding diversity in previous enrollment booms. While more data is needed, there appears to be some good news regarding both the numbers and percentages of women and underrepresented minority students involved in computer science as majors and as students in CS courses. Unfortunately, this good news does not exist for all units that responded to the survey.

In Sections E and F, we consider the impact of the current enrollment surge on the unit (e.g., challenges with space and instructional staff) as well as how units are responding to the current surge (e.g., increasing section sizes or number of sections taught). Lastly, this report includes three noteworthy appendices. Section G considers degree completions in computer science from the Integrated Postsecondary Education Data System (IPEDS) data. This section helps advance our understanding of the data collected in the CRA Enrollment Survey, and provides more information about the current surge in computer science at non-doctoral granting units (where data from the CRA survey is limited). Section H discusses the methodology of the CRA survey and Section I provides access to all figures individually, as well as the data that makes up the figures in this report. Finally, Section J acknowledges everyone who has assisted with the survey, data, analysis, or report.

Please contact any member of the CRA Enrollment Committee Institution Subgroup with questions about this report. The committee members are:

We also encourage those interested in more details and analysis about the current enrollment surge in computer science to obtain an upcoming report from the National Academies of Sciences, Engineering, and Medicine: Committee on the Growth of Computer Science Undergraduate Enrollments. The report is expected to be published later this year.

Update: The report is now available at https://cra.org/data/generation-cs/. 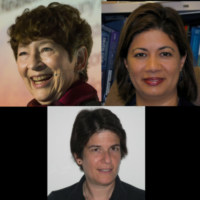 CCC White Paper- Advances in Artificial Intelligence Require Progress Across...
Scroll to top
We use cookies to understand how you use our site and to improve your experience. By continuing to use our site, you accept our use of cookies.Accept Read More
Disclaimer
Privacy Overview