Are You Working on the Taulbee Survey?

CRA Summit on Technology and Jobs

On December 12, CRA will host a Summit on Technology and Jobs in Washington, DC. The goal of the summit is to put the issue of technology and jobs on the national agenda in an informed and deliberate manner. It will bring together leading technologists, economists, and policy experts who will offer their views on where technology is headed and what its impact may be, and on policy issues raised by these projections and possible policy responses.

This award recognizes undergraduate students in North American colleges and universities who show outstanding research potential in an area of computing research. It is a wonderful way to recognize your best student researchers and your department.  The deadline for nominations is October 27.

CRA invites nominations for the 2018 CRA Distinguished Service Award and A. Nico Habermann Award. The CRA Distinguished Service Award is presented to a person who has made an outstanding service contribution to the computing research community. The CRA A. Nico Habermann Award recognizes a person who has made outstanding contributions aimed at increasing the numbers and/or successes of underrepresented groups in the computing research community. The deadline for receipt of nominations for both awards is December 8.

CRA’s biennial Career Mentoring Workshop will be offered on February 26-27, 2018 at The Westin Arlington Gateway in Arlington, Va. The workshop provides career advice and mentoring activities for junior assistant professors in computer science and engineering. In the next several months, we will be announcing the full agenda and registration information. Click here to subscribe to updates on the CRA Career Mentoring Workshop. 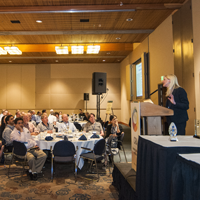 2018 IBM Two-Year Worldwide PhD Fellowship
Scroll to top
We use cookies to understand how you use our site and to improve your experience. By continuing to use our site, you accept our use of cookies.Accept Read More
Disclaimer
Privacy Overview