The long, long awaited 2018 Midterm elections have come and (mostly) gone.  As you’ve probably heard, the Democrats have gained control of the House of Representatives, while the Republicans have increased their majority in the Senate.  But what does this mean for science here in Washington?

Details don’t look great, as a fairly large number of experienced, science champions were ousted from their seats by voters.  A few examples:

There are other incumbents who we are waiting to hear final results. The most significant is Senator Bill Nelson (D-FL), who is the ranking Democrat on the Senate Commerce Committee and has been a strong advocate for NASA.  At the time of publication, Senator Nelson’s is behind in the vote count but the race is headed towards a protracted legal battle; we’re likely to not know the outcome for some time.

On the plus side, Eddie Bernice Johnson (D-TX) is expected to assume the chairmanship of the House Science, Space, and Technology Committee.  A long serving member of Congress, and on the Science Committee specifically, Rep. Johnson is a big advocate for scientific research and STEM education.  She released a statement outlining her agenda for the Science Committee in the next Congress and research is a big component.

Additionally, it looks like a relatively large number of people with science or engineering backgrounds have been elected to Congress.  For example, Lauren Underwood (D-IL), who is a registered nurse and health policy expert, defeated Rep. Hultgren; in VA-02, the voters put into office Elaine Luria (D) who is a nuclear engineer; and in IL-06, voters elected Sean Casten (D), a biochemist.  These are just a few examples; 314 Action is a good place to see who else with a science background was elected.  The hope is these members-elect will be able to bring their science and engineering expertise to the policy table.

In the more immediate term, how does the election impact funding levels for science research?  Regular readers will recall that the funding bill for NSF, NIST, and NASA has not been finished, and these agencies are on a continuing resolution until December 7th.  It’s unclear what impact the election will have.  President Trump is declaring the election a victory and will probably use this as a pretext to push for more border wall funding, which Democrats will oppose.  On the other hand, Democrats, who can claim their own victory by seizing the House, may want to punt these budgets to next year when they are in a partial majority and have a stronger negotiating position.  We’ll have to wait for things to play out more before we have a clearer idea of the outcome.  Expect this uncertainty to last into December, possibly right up to the New Year.

And looking forward to next year, the outcome is even more unclear.  Ultimately it will depend on how the President and the Republican Senate want to work with (or not work with) the Democratic House.  If there is a sense that cooperation will serve everyone’s purposes, things could be good; if there’s a sense that conflict will serve best, things could get ugly quick.  Keep in mind that the 2020 Presidential election is expected to begin the day after the midterms. Ultimately, science won’t be a defining issue, but it will be impacted by how the conflict between the House and President/Senate plays out. 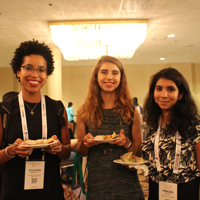 New from CRA: Database of Candidates for Academic and Industrial/Government...
Scroll to top
We use cookies to understand how you use our site and to improve your experience. By continuing to use our site, you accept our use of cookies.Accept Read More
Disclaimer
Privacy Overview