This article is published in the November 2019 issue.

The report begins by explaining the need for thermodynamic computers: with the end of Moore’s Law and Dennard scaling we will require novel methods of computing to continue making improvements to computational efficiency. It follows that “if we want to make computers function more efficiently then we should care about energy and its ability to efficiently create state changes — i.e. we should care about thermodynamics” (page 1). We can find inspiration for such computing methods in living systems – like the human brain or a folding protein – that are able to spontaneously find energy-efficient configurations. What if we could build a computer that worked in a similar way? This report contemplates uses for such future systems and then outlines a potential roadmap to develop them.

So, what is a thermodynamic computer (TC)? The report defines it as an “engineered, multi-scale, complex system that, when exposed to external potentials (inputs), spontaneously transitions between states in the short term while refining its organization in the long term, both as part of an inherent, adaptive process driven by thermodynamics…For example, TCs may employ naturally occurring device-level fluctuations to explore a state space and to stabilize on low-energy representations, which may then be employed in an engineered task” (page 6).

If we are able to successfully design such systems then, in addition to enabling “computation near fundamental limits of efficiency” and at lower costs, we will likely enable “understanding of the organization and computational power of living systems, potentially including the spontaneous emergence of ‘intelligence’,” “a very large increase in the capabilities of small, low-cost, computing systems, such as perceptual capabilities that rival those of animal sensory systems,” “lower the environmental impact of computing systems,” and “improve outcomes in most human enterprise, including medicine, business, agriculture, defense, security, leisure, etc.” (page 12-13).

To learn more about what a TC is and what it will to design one, read the full report here. 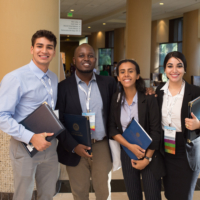 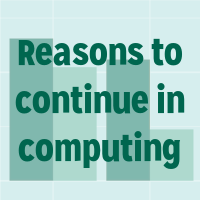 What Helps Undergraduate and Graduate Students Continue in Their Computing Degree...
Scroll to top
We use cookies to understand how you use our site and to improve your experience. By continuing to use our site, you accept our use of cookies.Accept Read More
Disclaimer
Privacy Overview