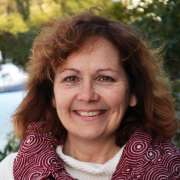 Lori Pollock is determined to challenge the perception that software engineers merely interact with their programming environment on their computers.

“The most effective software engineers are those who work well collaboratively in diverse teams and can communicate their ideas and problems with the team, but most importantly with the users of the software systems they are creating,” says the professor of computer and information sciences at the University of Delaware.

Pollock brings that philosophy to the classroom, where she also challenges her students to communicate without the technical jargon they typically use with their team and to focus on identifying the needs of users.

The Association for Computing Machinery recently recognized Pollock with the SIGSOFT Influential Educator Award for mentoring of undergraduate and graduate students, innovation in software engineering education, and educational research.

“To truly understand Lori’s impact you have to understand that she changed the professional trajectory of almost every student she mentored,” says former doctoral student David Shepherd, now senior principal scientist at ABB in Raleigh-Durham, North Carolina.

“Lori identified the potential in me, an unpolished undergraduate student from an unknown school, and relentlessly developed it over the course of my short five years at Delaware, changing the trajectory of my professional life.”

Sreedevi Sampath, now a faculty member at the University of Maryland-Baltimore County, credits her former professor with inspiring her to pursue a doctorate and a career in academia.

“Dr. Pollock believes in her students and inspires confidence in them,” she says. “She helped me realize my strengths and guided me to build on them. Working with her helped me see the flow of research and experience the joy of making discoveries and making contributions to the world.”

Sara Sprenkle, who also completed a doctoral degree with Pollock and now teaches computer science at Washington and Lee University, views her former professor as a valuable mentor.

“One of my goals is to be like Lori for my students,” she says. “I think about what she did for me and adapt those ideas. Since I often ask her about her teaching and advising process, she is still advising and mentoring me.”

Mary Lou Soffa, a colleague at the University of Virginia who nominated Pollock for the award, wrote, “She is an innovator in software engineering education, with particular focus on creating opportunities for students to apply their software engineering skills in service learning, be exposed to real-world software engineering research and practice, and build communication skills through teaching.”

In addition, she cited Pollock’s contributions to mentoring female graduate students through the Computing Research Association-Women (CRA-W) and her creation of the Virtual Undergraduate Townhall Series to provide role models and mentoring to undergraduates toward participation in research and graduate school.

Pollock has documented her various interventions and data collection and resulting impacts in a number of publications in ACM SIGCSE, the major computer science education conference.

She is currently serving on the Computer Science Teachers Association (CSTA) Task Force, which is charged with revising the CSTA Standards for K-12 computer science education in the United States. These standards are used by K-12 school districts across the nation to guide their integration of computer science into their curricula.

Pollock will receive the SIGSOFT Influential Educator Award at the International Conference on Software Engineering in Austin, Texas, in May.