Each year in co-sponsorship with Applied Computer Security Associates (ACSA) and the Hewlett-Packard Enterprise (HPE), CRA-W/ACSA presents the Scholarship for Women Studying Information Security (SWSIS) to 10-15 women in their undergraduate or Master’s studies. This year a SWSIS 2016 recipient shared her experience in the Information Security field and what it means to receive this scholarship. 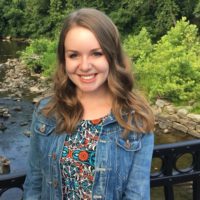 What does the SWSIS Scholarship mean to you?

I was extremely honored to receive the SWSIS scholarship from CRA-W, ACSA, and HPE. Not only is the scholarship great in that it provides financial support, but it serves as a validation that I am seen as having potential to succeed in the security world. Receiving this scholarship gives me more incentive to maintain a high personal standard for my academic success. One thing that makes this scholarship so important to me is the high level of professionalism I see in the other women who were selected. To be chosen among a group of dedicated, intelligent women who are excelling in the information security field, makes receiving the scholarship so much more meaningful.

When and where did your interest in cyber security start?

I always knew that I wanted to have a career that would make a positive impact on people. When I started college, I had initially declared my major as biochemistry with the intention of going into medicine. In high school, I had excelled in math and science over other subjects, but I had never considered cybersecurity as a potential career option. After a year as a biochemistry major, I realized I had little passion for the coursework and decided to change my major to computer science, with a security focus. I had the realization that cybersecurity professionals have the ability to serve the public, similarly to the way doctors do. Cyber professionals keep large-scale computer systems running smoothly, protect breaches of sensitive information, and avert hackers from gaining access to protected networks. In an increasingly digital age, I knew that people were at risk, and I wanted to be a part of protecting them.

What challenges have you faced in your field?

I would say the challenge that I experience most frequently as a computer science student and a developing professional is the feeling of being underrepresented as a woman in my field. The issue of gender disparity in computer science (and even more so in security) is a challenge that I feel needs to be more widely addressed. In my opinion, it starts as a pipeline problem, as young girls aren’t introduced to computer science early on in their education. Once a woman is in the field, she has a higher likelihood of being “filtered” out. It is because of this gender disparity that women often experience a lack of female role models. I’m a big believer in the role model effect – there is something about seeing someone who looks like you succeed that makes you believe that you can succeed, too.

Where do you see yourself in the next 5 years?

In five years, I’d like to have gained broad experience in a number of security topics. I hope to have completed a graduate degree in computer science, in addition to continuing volunteer work at girls’ coding classes and programs. I’m really excited about the possibility of taking on leadership opportunities and being able to be a driving force in the dynamic and critical field of information security.

How do you think the SWSIS scholarship has helped you accomplish your current and future academic/career goals?

Throughout my education and multiple internship experiences, I have only just begun to uncover the many facets that make up the cybersecurity field. Being a part of the SWSIS community, I now have the opportunity to learn from a wide variety of security professionals, to attend conferences, and to speak publicly about my interest in the field. SWSIS has done just that – in allowing me to have a platform, like this one, to promote the inclusion of women in information security.

Interviewed by Melissa Borts at the Computing Research Association.