This article is published in the September 2011 issue.

The goal of the Tapia conferences1 is to bring together undergraduate and graduate students, professionals, and faculty in CS&E from all backgrounds and ethnicities to: 1) Celebrate the diversity that currently exists in CS&E; 2) Create communities of CS&E people with diverse backgrounds, genders, and ethnicities that extend beyond the conference; 3) Receive advice from and make useful contacts with CS&E leaders in academia and industry; and 4) Be inspired by great presentations and conversations with successful people in CS&E who have similar backgrounds, ethnicities, and gender as the attendees. Thus, invited speakers, graduate students, and undergraduates present inspiring research results in talks, workshops, and poster sessions and get career advice in panel sessions and unstructured conversations. 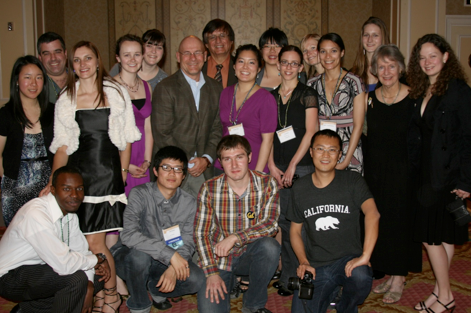 Richard Tapia (center, back) next to the author and part of the UC Berkeley brigade.2

For the ten-year anniversary, the organizers brought me in as a new general chair to take a fresh look at the conference, which was held April 3 to 5, 2011 in San Francisco. Two themes highlight the 2011 Tapia Conference: celebration and diversity. The conference celebrated the technical contributions and career interests of diverse people in diverse computing fields, with an emphasis on inspiring students from diverse communities to continue their education in computing.

Tapia 2011 tried a different format from the past, based in large part on surveys of past attendees. In fact, Tapia 2011 turned out to be an experiment in using modern, Internet-based collaboration tools to collect data and drive the conference. Difficult decisions relied on polls of previous Tapia’s attendees using online survey services like Survey Monkey or Google Forms. Unsurprisingly, we found that it was much easier and more likely to be correct when people were asked, versus trying to guess what people would like. Based on the success of Tapia 2011, I recommend that all conference organizers use online surveys of attendees to plan their events.

A Unique Conference: The Most Diverse in Computing

It is striking how diverse Tapia is compared to all other conferences (see photo above). Sticking to form, we use the final survey (completed by 73% of attendees) to supply quantitative evaluation of the conference. First the data:

Clearly, the makeup of most research conferences is very different from the statistics above. Furthermore, for conferences that focus on a specific

under-represented group, it is usually the case that 90% to 95% of the attendees are from the target group. Ironically, even if the ethnic or gender makeup is very different, they are no more diverse than other CS conferences.

I believe the diversity is one reason Tapia was so popular. If you believe in diversity, there is no better conference!

By all measures Tapia 2011 was a success. Attendance set a record of 517, one-third larger than last time. In fact, we had to close registration the week before the conference because we couldn’t fit any more people into the meeting room. We might have shot past 550 without the cutoff. The 10% drop in Portland was followed by a 33% increase in San Francisco.

A sample of the responses to the survey supports the finding that the conference was effective as well as popular:

Another sign of success of Tapia 2011 is that 38 professional attendees and 130 student attendees volunteered to help with future Tapia conferences.

The theme of Tapia 2011 was “Connections,” in that we are all connected together no matter how we appear or where we currently live, much more than you might expect. I demonstrated such connections in the opening session by talking about the parallels between the lives of Richard Tapia and myself: The connection theme carried through new events for 2011. Eight of the ten top- rated events were tried for the first time at Tapia 2011. These innovations included:

See You in 2013 (and Shortly Thereafter)

A final indication of the success of Tapia 2011 is that CDC plans to make Tapia an annual event starting in 2013. Based on survey feedback, the next Tapia will be moved to late February so that students can apply for internships with companies at Tapia. This feedback also suggested that a Friday-Sunday conference would be a lot easier for students to attend, so the next conference will likely be held some weekend in February 2013. Watch this space for the final dates and location.

Tapia 2011 wouldn’t have happened or been as successful without the hard work of a lot of volunteers and the financial support of a lot of organizations. I’d like to thank everyone, but especially those mentioned earlier as well as:

David Patterson is Director of the Parallel Computing Laboratory and the Pardee Professor of Computer Science at UC Berkeley. He is a former chair and member of the Computing Research Association’s Board of Directors.

1 – Tapia Conferences are organized by the Coalition to Diversify Computing (CDC) and sponsored by ACM in cooperation with CRA and the IEEE Computer Society.