Ken Barker is the Dean of the Faculty of Science and a Professor of Computer Science at the University of Calgary. He served as the Department Head of Computer Science for nine years before his appointment as Dean. In addition to holding a Ph.D. in Computing Science from the University of Alberta (1990) he has 25 years of experience working with industrial computer systems, fifteen years of consulting experience in the design of commercial databases, and a particular interest in system integration, distributed systems, and the privacy and security of data repositories. As the director of research laboratories at the Universities of Calgary and Manitoba he has supervised over 50 graduate students, in addition to several post-docs and research assistants. Dr. Barker has published in excess of 225 peer reviewed publications in areas as diverse as distributed systems, software engineering, transaction systems, simulations, privacy and security.

Dr. Andrew Sears is a professor and Dean of the B. Thomas Golisano College of Computing and Information Sciences at the Rochester Institute of Technology. Dr. Sears’ research explores issues related to human-centered computing and accessibility. His research projects have addressed issues associated with mobile computing, health information technologies, speech recognition, managing interruptions while working with information technologies, and assessing an individual’s cognitive status via normal daily interactions with information technologies. Dr. Sears’ research has been supported by various industry leaders, government agencies, and foundations, including IBM, Intel, Microsoft, Motorola, the National Science Foundation (NSF), the National Institute on Disability and Rehabilitation Research (NIDRR), the National Institute of Standards and Technology (NIST), and the Verizon Foundation.

Nominees by Petition Sought for CRA Board

The Computing Research Association seeks your help in suggesting nominations for its Board of Directors.  We seek individuals who have time, energy, initiative, and resources to work on CRA issues on behalf of the entire CRA community.  Ours is a working board, and all members are expected to do a fair share of the work.

On January 10, 2014, the CRA Elections Committee announces its slate of nominees for a seat on the Board of Directors.CRA encourages nominations by petition as well. Petition nominations signed by the Designated Voting Representatives of at least five Constituent Member Organizations that are current in dues payment will be accepted until February 7, 2014.

A complete nomination package for petition candidates must reach CRA via e-mail (elections@cra.org) no later than February 7, 2014. E-mail submissions as Word attachments or in straight ASCII text are preferred. Separately, each of the five supporters of the petition should send an e-mail to elections@cra.org simply stating their support for the petition candidate to run for a seat on the CRA Board of Directors. Information on submitting petition nominations and nomination forms are available here. 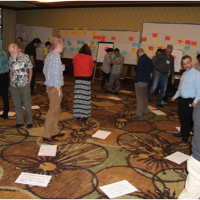 CRA Conference at Snowbird, July 2014 Preliminary Program
Scroll to top
We use cookies to understand how you use our site and to improve your experience. By continuing to use our site, you accept our use of cookies.Accept Read More
Disclaimer
Privacy Overview