At lunch, the participants seemed lighter, relieved. Their 10-minute final pitches for funding behind them, the weight of all the work they’d done during the week was shed. The funding advisors were huddled in a conference room to discuss their recommendations; a final decision wouldn’t be made until later. There was nothing to do but get a bite to eat and socialize with the others in the group, new colleagues who just four days ago were perfect strangers. This is what Fridays are like at an Ideas Lab.

In October, 29 people gathered at the Emory University Conference center in Atlanta, hoping to get funded to do research on data intensive learning to improve teaching and learning. Their backgrounds were varied; a deliberate attempt was made to invite participants from a broad spectrum of academic and business backgrounds. Participants applied to attend, which means they were prepared to clear a full five days from their schedules and throw their lots in with a group of people they didn’t know, but with whom they’d have to partner in order to get funded. The amount of money on the table: $3-5 million.

With the goal of inspiring more innovative and multi-disciplinary research proposals, the Ideas Lab (aka Sandpit) was conceived by the UK Engineering and Physical Sciences Research Council (EPSRC) in 2003. Knowinnovation helped with the early design, and we’ve been privileged to facilitate dozens of these workshops, known for being extremely intense, interactive and demanding. It’s remarkable to witness what happens at an Ideas Lab: a group of highly intelligent people with broad academic and industrial expertise come together around a serious topic to redefine the challenge and generate novel ideas to address it. The National Science Foundation (NSF) conducted its first Ideas Lab in 2009, a collaboration with the EPSRC, on the application of synthetic biology. Subsequent Ideas Labs have included topics like enhancing photosynthesis; improving the nitrogen cycle; visualizing biological data; assembling, visualizing and analyzing the tree of life. Many UK and US research councils use the methodology; Knowinnovation has facilitated events for the Technology Strategy Board (TSB), the Natural Environment Research Council (NERC), the National Institutes of Health (NIH), the Howard Hughes Medical Institute (HHMI) as well as for the NSF and the EPSRC. We’ve even facilitated an astrobiology strategy workshop for NASA. 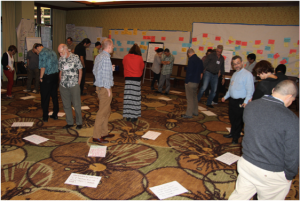 It’s not that research proposals solicited in a more traditional method haven’t been innovative or produced good science. They have, and they still do, and not every research topic merits an Ideas Lab. But because the format involves a diverse group of people and forces them to catalyze, collide and collaborate, the output is often unique and innovative. Questions arise that wouldn’t otherwise have been posed, and partnerships form between people from very different scientific disciplines, universities and stakeholder organizations. Part mix of people, part pressure, part incentive – the week ends up with a very dynamic collection of research teams and topics.

Participants arrive for a Monday start and most of the first day is spent getting to know the talent and expertise in the room. We use a number of different activities to get people talking with each other so they learn more about how they might work together. On Tuesday, we explore the landscape of the challenge, often inviting experts and stakeholders to make presentations. We ask participants to listen to these presentations a bit differently, in order to get to questions and problems that we might not have asked the same way before. We take a lot of time to define the problem, because it’s often redefining the question at hand that inspires novel ideas. Sometimes it isn’t until mid-day Wednesday that groups begin to form around different problems and start generating ideas.

“I’m grateful, as a shy and more reserved person, that the process teased out our ideas in very comfortable, organic ways,” said Niem Huynh, Ph.D., a Senior Researcher at the Association of American Geographers, who attended the “Data Intensive” event. “People were allowed to express their ideas in a variety of situations and somehow, the facilitation allowed us to meet with the maximum number of different people possible.”

By the end of the day on Wednesday, very rough proposals are shaping up, but it’s still early; groups form and splinter and reform a number of times over the next two days. On Thursday, the working groups make several presentations of their thinking so far, and the rest of the group uses a peer feedback process to help enhance and critique the ideas to make them stronger. As a result, participants end up collaborating with people that they’re also competing against. It’s a bit awkward, sometimes, but amazingly, it works. Solving the problem becomes a priority. In that way, everyone at the Ideas Lab contributes to the solutions, whether they individually are funded or not. 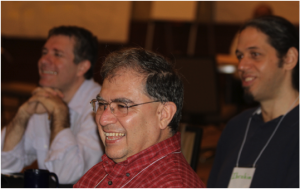 After the Ideas Lab, the groups with the most compelling ideas are given the nod. They have several weeks to put meat on the bones of their proposals and submit a more formal, comprehensive funding request based on the idea that came out of the Ideas Lab. Those who didn’t get selected for funding are a bit disappointed, surely, but we often hear from unfunded participants that despite the fact they won’t walk away with money, they significantly increased and enhanced their network of people and knowledge. And on many occasions, ideas born in an Ideas Lab are funded from other sources.

A different way to work

The methodology used for Ideas Labs and Sandpits isn’t for everyone. Not every topic lends itself to this type of pressure and competition. Not every academic can perform when thrust in this intense environment, which has been likened to that of Dragon’s Den. But the National Science Foundation, and the other research funders who’ve used it praise the innovative results, and at the end of the week, the participants are surprised at the ground they’ve covered in such a compact period of time.

“After the workshop,” said Huynh, “my views of idea ownership, the power of working with people with different backgrounds, and interest in creativity development have expanded.” 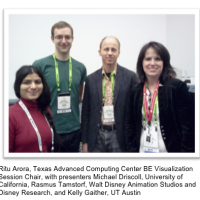 CRA Board – New Members Announced, Nominees Sought
Scroll to top
We use cookies to understand how you use our site and to improve your experience. By continuing to use our site, you accept our use of cookies.Accept Read More
Disclaimer
Privacy Overview