This article is published in the June 2014 issue.

On May 29, the U.S. House of Representatives was on the verge of approving new funding for the National Science Foundation (NSF) that would increase the agency’s budget more than 3 percent in FY 2015, while at the same time the House Science, Space and Technology Committee approved legislation the day before that would authorize smaller increases and place new restrictions and scrutiny on science funding at the same agency.

As this went to press, the House had not yet concluded consideration of the FY 2015 Commerce, Justice, Science (CJS) Appropriations Act, a bill that includes funding for NSF, the National Aeronautics and Space Administration, the National Institute of Standards and Technology (NIST), and the National Oceanic and Atmospheric Agency. The bill, as introduced, represents a significant show of support for Federal investments in fundamental research. House appropriators provided $7.4 billion in funding for NSF in FY 2015 in the bill, an increase of 3.3 percent over FY 2014, and a bigger increase than the President requested in his own FY 2015 budget request ($7.25 billion, or 1.2 percent).

The bill would increase NSF’s Research and Related Activities account — home to the great bulk of NSF’s research funding, including research in the Computer and Information Science and Engineering (CISE) directorate — by 2.9 percent, to $5.98 billion in FY 2015, an increase of $170 million over FY 2014.

The bill is not quite as good for NIST, which saw big increases last year for its Scientific and Technical Research and Services (STRS) account. STRS would hold flat in FY 2015 CJS bill at $651 million, below the President’s request of $680 million and the same as the account received in FY 2014.

It was still not clear at press time whether amendments that might target spending increases at NSF would succeed. A rumored amendment from some members of the House Science, Space and Technology (SST) Committee Majority that would shift some funding from NSF’s Social, Behavioral and Economic directorate to other NSF directorates (including CISE) was not yet in order at press time. The effort is similar to language approved as part of the House SST Committee’s consideration of the Frontiers in Innovation, Research, Science and Technology (FIRST) Act, which passed through the committee on a strict party-line vote on Wednesday.

The bill’s lead sponsor is the House Science Committee chairman, Lamar Smith (R-TX). The bill would reauthorize the majority of the America COMPETES Act of 2010 — a bipartisan bill that authorized a doubling of the budgets of NSF, NIST and the Department of Energy’s Office of Science in the name of ensuring the Nation’s economic competitiveness long-term — and focuses on the non-energy agencies (NSF, NIST, and the White House’s Office of Science and Technology Policy).

While the original COMPETES Act garnered near universal acclaim from the science community and Congress alike, the FIRST Act is opposed by a wide array of industry, university and scientific society organizations with an interest in the Federal investment in research. Opponents of the measure (which include CRA) note that the bill only authorizes the agencies it contains for two years, and one of those years (FY 2014) is the current year with settled appropriations. Democratic efforts to add a third year of funding authorizations for Federal science agencies as a way of demonstrating some commitment to the science community were rebuffed on a party-line vote during the committee markup of the bill.

The FIRST Act also authorizes very small increases for NSF (about 1.5 percent) and NIST (1 percent) in FY 2015, and the FY 2014 authorizations match the numbers appropriated as part of the FY 2014 Omnibus appropriation, with one significant exception: the bill would strip $100 million in authorizations from the $256 million NSF spends on Social, Behavioral, and Economic Science (SBE). The bill would redistribute that $100 million amongst the other NSF directorates, include about $70 million for CISE.

Smith and the other members of the committee majority have placed a target on NSF’s SBE Directorate on a largely philosophical basis. They do not believe that the Federal government should spend any of its increasingly limited resources supporting what they believe to be the “softer” sciences like sociology and political science. However, CRA and others have argued that much of the research performed in SBE has direct relevance to work in CISE, including valuable insights into human behavior and its impact on cyber security problems, as well as a better understanding of human-computer interaction.

In addition to the troubling language regarding SBE, the bill includes language designed to ensure “greater accountability” in the grant-making process at NSF. This focus on SBE is largely in response to concerns raised by Senate Republican Tom Coburn (R-OK) last year that cited a number of NSF awards that appeared to be “silly” uses of taxpayer dollars (though later found, in every case, to be a worthy investment in research that provided valuable new understanding in that area). To prevent such misuses of NSF funding from happening in the future, the new language requires NSF to affirm that all grant awards funded by the Foundation are “worthy of Federal funding” and in the national interest, “as indicated by having the potential to achieve:”

The language appears in a section of the bill focused on “NSF Accountability” and represents and improvement over what had been circulated in draft versions of the bill. (Smith’s original draft of the bill was problematic because it required that prior to the award of any funding, NSF had to publish on a website the justification for that award (based on the above criteria), along with the name of the employee or employees who made the determination. However, after an uproar from the science community DC over what is largely seen as micromanagement of an agency which actually does a decent job of being transparent and focused on merit review, most of the most disagreeable portions of the language were stripped. In their place, language that requires a public announcement of the award, including “a written justification from a responsible foundation official” that the grant meets the criteria. For the science community, the most recent language is somewhat better, but it still provides a hook by which Congress can call the “responsible Foundation official” on the carpet for any dubious (in their, i.e. Congressional minds) grant. Of course, Congress already has that power.

The FIRST Act does contain a reauthorization of the Networking and Information Technology Research and Development Program (NITRD). CRA, along with IEEE-USA, SIAM and USACM endorsed this a year ago when it was introduced in a stand-alone bill as the Advancing America’s NITRD Act. It’s not clear whether the NITRD language would survive a conference with the Senate.

Two possible silver linings in all this, for science advocates: first, the Senate Commerce, Science, and Transportation Committee is expected to release their version of a COMPETES reauthorization any week now. The hope within the science community is that it will be a more true reauthorization of COMPETES and will be more bipartisan in nature. The second silver lining is that FIRST is an authorizing bill, which means this is only covers how NSF can spend its money (rather than an appropriations bill which determines how much money NSF gets). Current year funding for NSF has already been determined and is unlikely to be impacted by this bill, assuming it gets signed into law. As well, next year’s funding levels have already passed the House Appropriations Committee, and they did not incorporate the FIRST Act levels in what they approved. We’ll keep our readers posted on further developments with this legislation.

It’s also not clear what the Senate will do with the CJS Appropriation. The Senate Appropriations Chair Barbara Mikulski (D-MD) has been quite vocal about her support for Federal science agencies. Appropriators also have the advantage of working from a budget resolution for FY 2015, which provide the same set of numbers to both House and Senate Appropriation Committees, which, in turn, should make the path to compromise and final passage a lot easier.

We will keep you updated on both pieces of legislation as they move through the process. Find all the latest at the CRA Blog at https://cra.org/blog. 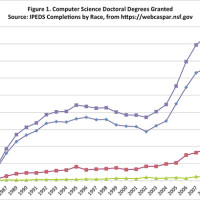 Visions 2025 Update
Scroll to top
We use cookies to understand how you use our site and to improve your experience. By continuing to use our site, you accept our use of cookies.Accept Read More
Disclaimer
Privacy Overview