This article is published in the June 2015 issue.

As part of its mission to develop a next generation of leaders in the computing research community, the Computing Research Association’s Computing Community Consortium recently held its third Leadership in Science Policy Institute (LiSPI) on April 27-28 in Washington, D.C. This  one-and-a-half day workshop intended to educate a cadre of computing researchers on how science policy in the U.S. is formulated and how our government works. Participants heard candid and “off the record” views from people who are currently or previously involved in science policy. Thirty-six computer scientists and engineers from 30 different universities and research organizations attended.

The workshop offered sessions on: interacting with Federal science agencies, how new initiatives are created within agencies, the role of Federal advisory committees, the Federal budget process, embedding scientists in non-science agencies, the arguments for supporting research in computing, how to talk to policymakers, and a rather candid discussion from staffers on the House Science, Space and Technology committee and the Senate Armed Services Committee. LiSPI participants were required to complete both pre- and post-workshop homework assignments.

LiSPI co-organizer Fred B. Schneider started the day by laying out goals of the workshop and workshop co-organizer Peter Harsha followed by outlining “the case” for computing research investments in Washington. Kei Koizumi, from the White House’s Office of Science and Technology Policy, led participants through a primer on the Federal R&D budget process, including key milestones and inflection points in the process. He also explained impacts of the current political and fiscal situation in Congress and how this might affect Federal science budgets in the future.

Participants then heard from representatives of two key science agencies: Angelos Keromytis, a former program manager at the National Science Foundation, now a program manager at the Department of Defense’s Defense Advanced Research Projects Agency, and Farnam Jahanian, former assistant director for Computer and Information Science and Engineering at the NSF, now provost at Carnegie Mellon University. This panel explained that influencing policy decisions at a Federal agency involves a somewhat different skill set and somewhat different approach than influencing faculty peers, Congress, or the White House. The panelists also discussed how agencies provide opportunities for researchers to shape Federal policy in their fields—by serving on advisory committees and by taking rotations as program managers, division directors, or office directors.  Keromytis and Jahanian also discussed how new agency initiatives get started, focusing on the culture and traditions that create the lens through which agencies view themselves and are viewed by others.

In the next session, Edward Lazowska, from the University of Washington (and former Chair of CCC), Annie Antón, from Georgia Tech, and Lynette Millett, from the National Academies’ Computer Science and Telecommunications Board (CSTB), described the role and dynamics of advisory committees that are found at nearly every level of the Federal government. The speakers discussed how those committees work (in theory and practice), why they sometimes do not work, how members are chosen, and who they are intended to influence (as well as who they actually influence). Lazowska and Antón have served on a variety of Federal advisory committees, and Millett has staffed many CSTB studies, so these speakers were particularly well qualified to discuss how issues get raised and vetted, how outcomes get finalized and disseminated, how committees do their jobs, and how members of the community can be effective when serving on these committees.

Practical advice on “having the conversation” with policymakers was offered by a former congressional staffer and current member of the Microsoft Technology and Civic Engagement Group, Elizabeth Grossman. Grossman described how policymakers approach meetings with researchers and how researchers might be best prepared to provide useful input. Grossman also charged the attendees with coming up with a pitch, a 3-5 minute introduction to a hypothetical policymaker or answering a tough question a policymaker might pose—honing it as “homework” during the first night of the workshop and then presenting it to a “murder board” of public policy professionals (Grossman, Cameron Wilson of code.org, and Harsha of CRA—all former congressional committee professional staff) for constructive advice on the second day of the workshop. This practicum was perhaps the highest rated of the workshop, and participants got a good sense of how a conversation might go, as well as how it could be most productive. 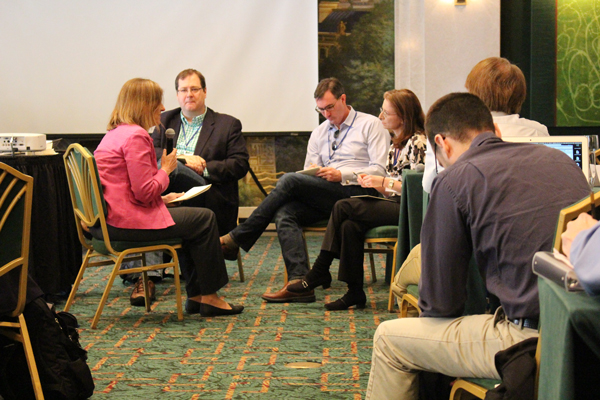 Ending the first day’s sessions, current congressional staff members Dahlia Sokolov, from the House Science, Space, and Technology committee minority, and Arun Seraphin, from the Senate Armed Services Committee minority, took to the podium to describe the unique difficulties of communicating the value of research to elected officials and the difficulties of prioritizing science investments in the current political and fiscal climate. Both Seraphin and Sokolov spoke candidly about challenges they face in an increasingly polarized Congress and about the importance of getting feedback from the computer science community on their efforts.

In addition to the practicum, day two of the workshop featured a panel focused on computer scientists who have taken policy positions in non-research agencies or the White House. Edward Felten, former CTO for the Federal Trade Commission (the first CTO in the agency’s history), Randy Bryant, on detail at the White House Office of Science and Technology Policy, and Stephanie Forrest, who recently completed a one-year fellowship at the Department of State, all spoke about their experiences incorporating technical expertise in these rather non-technical environments and how important it is that these non-science mission-oriented agencies establish a good connection to the research community. Peter Swire, former chief counselor for Privacy at the White House Office of Management and Budget in the Clinton Administration, and a privacy lawyer and professor at Georgia Tech, made the case that computer scientists need to take advantage of opportunities to serve policy roles beyond those just focused on research funding. Technical expertise is valued throughout D.C. policymaking, but too few computing researchers make themselves available for such service.

Schneider wrapped up the workshop with a session about serving as a witness at a congressional hearing. He played a videotaped highlight from a recent hearing on the Federal Networking and Information Technology R&D program. Participants viewed the opening five-minute statement from CCC’s Lazowska presenting a “case for funding computing research” as an exemplar of how a good opening statement might sound. Schneider then put a question to the participants about how they might respond if asked, as witnesses at a congressional hearing, about a particular science policy bill. Participants were asked to craft one-minute answers to the question as their “final exam” for the day.

Feedback from the attendees was quite positive. Slides from the speakers are posted on the web (https://cra.org/ccc/leadership/leadership-in-science-policy-institute) for interested CRN readers. Chances are quite good that CRA will present similar programs in the future, since there is an acute need to develop a community of computer scientists who can participate in science policy. If you would like to be considered for participation in those programs, keep an eye on the Computing Research Policy Blog (https://cra.org/blog) and the CCC Blog (http://cccblog.org) for the next announcement. 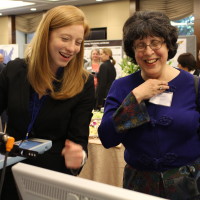 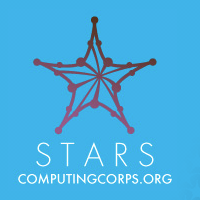 10 Years of RESPECT for Diversity: 10th anniversary of the STARS Celebration...
Scroll to top
We use cookies to understand how you use our site and to improve your experience. By continuing to use our site, you accept our use of cookies.Accept Read More
Disclaimer
Privacy Overview