Nine hours can have a dramatic impact—one student described her experience at the Becoming a Robot Guru 2 Workshop as “life changing.” On June 19th, I co-hosted this CRA-W/CDC Discipline Specific Workshop (DSW) along with Sandra Faust (Google[x]) and Meeko Oishi (University of New Mexico). It was held before the International Robotics: Science and Systems Conference (RSS) in Ann Arbor, Michigan. This was the second time I offered this DSW, the first being held at the 2015 IEEE International Conference in Robotics and Automation.

We awarded thirty scholarships to primarily undergraduate students to attend the workshop and subsequent conference. The diversity of attendees was inspiring including women, African Americans, Native Americans, Hispanics, and disabled students. Most of the students were from Minority Serving Institutions (MSIs), and several had never traveled beyond their state before. The ability to fund so many students was enabled by partnering Robot Guru with the NASA Swarmathon Competition. This national competition provides robotic hardware and/or simulation software to students to compete in an annual foraging competition. Co-funded students attended a Swarmathon-specific workshop the day before Robot Guru. Partners have been a strong component of the Robot Guru workshops. The 2015 workshop was co-sponsored by the host conference. In both years, the partnerships doubled the number of awarded scholarships.

The schedule provided the students interaction opportunities with experts through panels, small group mentoring, or research keynote talks. Carefully crafted panel topics included: How to Do it All: Integrating Theory, Hardware and Software, Human and Biological Applications of Robotics, Career Paths in Robotics, and the Who, What, Where, When, and Why of Graduate School. Research keynotes by Professors Lydia Kavraki and Maja Matarić amazed the attendees with inspiring talks. A highlight of the program was a poster session. After practicing with workshop organizers during Swamathon, Robot Guru students presented posters on their preliminary research at a session open to all RSS attendees. Several of the RSS organizing committee members attended, providing the students unprecedented one-on-one access to top experts.

One student was so grateful she emailed to thank us, but it was clear the workshop was impactful for all attendees. Before the workshop, I had a concern that the students would not be receptive to learning about robotics research. Swarmathon organizers mentioned that some students questioned if they had to go to this “graduate school recruiting thing.” It made sense; graduate school is a scary concept to someone with little previous exposure. Many students were first generation college students, had previously earned associates degrees, and had little experience outside their MSI. Just after the workshop, the impact was clear. Robot Guru attendees were introducing themselves to other conference attendees and pursuing information about graduate school. The post-workshop evaluations reveled that 82% of the students now want to pursue a graduate degree, and almost 60% now want to pursue a PhD specializing in robotics.

After this last workshop, I’ve considered the factors that led to such an amazing, impactful event that has been improving over the past two years. It boils down to speakers, students, and a bit of hard work. Our speakers have been amazing. From their post-workshop evaluations, it was clear that speaker participation was motivated by a personal belief to improve diversity in robotics. Through their concerted efforts, these volunteers were able to make a big impact. We could never thank them enough. Also, DSWs provide an unprecedented opportunity for students. Students come to Robot Guru with excitement and a little experience, and leave with a new respect and career plan for their future in the field. For these results, I am happy to put in the hard work. Robot Guru 3 is already under discussion for 2017. 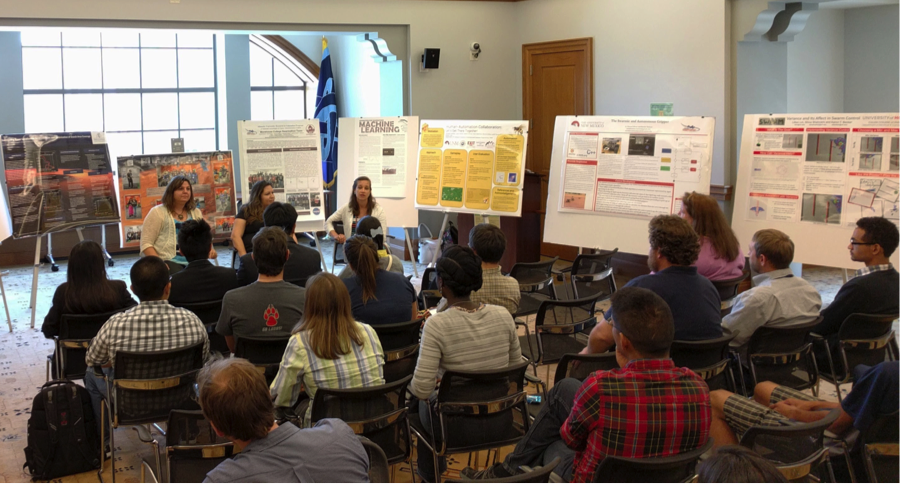 Martha Kim and Hanna Wallach are BECA winners for 2016

Fresh off the Press…Summer/Fall 2016 Newsletter!
Scroll to top