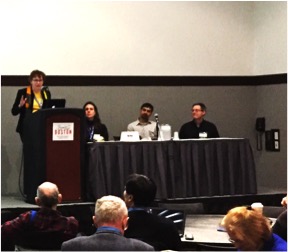 Recently we posted a blog about Health in Your Pocket: Diagnosing and Treating Disease with Smartphones, a press briefing that CCC members, Elizabeth (Beth) Mynatt, Shwetak Patel, and Gregory Hager presented at the Annual Meeting of the American Association for the Advance of Science (AAAS) in early February.

The focus of this post is on the Internet of Things (IoT). CCC Chair Beth Mynatt, CCC Executive Council Member Ben Zorn, and CCC Council Member Shwetak Patel were on a panel moderated by CCC Director Ann Drobnis on What Happens When Everyday Objects Become Internet Devices: A Science Policy Agenda.

Mynatt began the presentation by asking how informational, physical and programmatic components reflect social and physical frameworks such as the boundaries of places, human roles, and expectations of intelligence in her presentation called How People Think and Reason About an Internet of Things. She warned that a computational system does not necessarily reflect human understandings and may be dumb, dangerous or many points in between. In a presentation titled Programming a Secure, Robust, and Sustainable Internet of Things, Zorn talked about the potential that IoT has to enhance the process of doing science, but cautioned that it also creates an increasing dependence on the underlying software and hardware infrastructure. Finally, Patel presented on The Future of Smart Environments and the Internet of Things and the problem it creates due to the lack of policy and a rapidly growing industry. This, he suggested, has led to a number of security, deployment, and sustainability challenges for industry.

You can see the full presentation here.

The panel was well attended with over 80 individuals from academia and industry and a number of important questions were addressed during the discussion such as ownership: who owns the “things” in IoT, who owns the data, and what is the economic model, what are the incentives for ownership? Another question that generated a lot of discussion was around regulations for the Internet of Things – should they come from the policymakers or from the community? 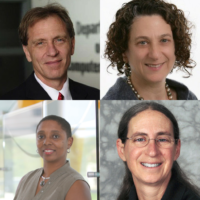 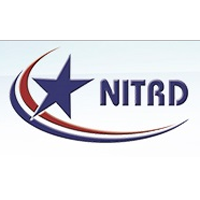 Computing Community Consortium (CCC) Response to NITRD “Smart Cities and Communities...
Scroll to top
We use cookies to understand how you use our site and to improve your experience. By continuing to use our site, you accept our use of cookies.Accept Read More
Disclaimer
Privacy Overview