Congress recently passed the Infrastructure Investment and Jobs Act, a bipartisan bill which includes $550 billion in new federal spending on infrastructure over five years. President Biden is scheduled to sign the bill into law.

While designed as a traditional infrastructure bill, an analysis of the legislation by the Computing Research Policy Blog found several sections that are of note to the research community and the computing research community specifically:

For several years, the Computing Community Consortium (CCC) has advocated for involving the computing research community in the development and deployment of smart and connected infrastructure. From 2017 – 2019 the CCC maintained a task force focused on Intelligent Infrastructure. Intelligent infrastructure refers to the embedding of sensing, computing, and communications capabilities into physical infrastructure, and this task force focused on exploring the challenges and opportunities in the intersection between infrastructure, the Internet of Things, and other relevant technologies that are vital to the creation of smart cities and communities.

Investments in infrastructure are typically long-term investments (on the order of multiple decades in many cases); therefore it is necessary to build with a view to the future. Modern computing technologies are small, energy-efficient, and reliable enough to be embedded into new infrastructure. This offers the ability to monitor and modify this infrastructure over time to improve performance or safety; for instance, modifying traffic lights to optimize traffic flows. Computing researchers must be involved in creating, testing, and deploying these technologies that, while potentially beneficial, also increase the complexity of systems and increase the dimensions for failure.

One of its key activities was producing a white paper series in collaboration with the Electrical and Computer Engineering Department Heads Association (ECEDHA). The white papers were:

In January 2018, members of this task force participated in a congressional briefing where they made the case for federal funding investment in intelligent infrastructure. From the CRA Policy Blog post about the briefing:

The panel —  led by moderator Daniel Lopresti, Chair of the Department of Computer Science at Lehigh University, along with Henning Schulzrinne of Columbia (and former CTO of the Federal Communication Commission); Matt Wansley, General Counsel for nuTonomy, a startup focused on autonomous vehicle technologies; Nadya Bliss, the Director of the Global Security Institute at Arizona State; and Beth Mynatt, Director of the Institute for People and Technology at Georgia Tech — highlighted the promise of the technologies that will enable more intelligent infrastructures, but also noted critical gaps and barriers to successful deployments. The briefing was sponsored by CRA, along with honorary co-hosts Rep. Lamar Smith (R-TX), Chair of the House Science, Space and Technology Committee, and Rep. Eddie Bernice Johnson (D-TX), Ranking Member of the House Science, Space and Technology Committee…

“The scope of the transformation we are facing is truly unprecedented,” Lopresti noted. “It’s hard to find proper comparisons, but intelligent infrastructure is likely to have an impact on our society comparable to the establishment of the national electrical grid in the 1930s, the interstate highway system in the 1950s, and the Internet in the 1960s. Indeed, intelligent infrastructure can be viewed as the convergence of these three very powerful ideas.”

The panel pointed out a rich set of research problems that require solving to truly realize the benefits of intelligent infrastructures along four foundational areas. Schulzrinne discussed the need for resiliency and adaptability in these sorts of systems, the ability of the infrastructure to cope with extreme or unexpected circumstances — for example, when wireless communications are subject to natural disasters on the scope of Hurricane Maria that devastated Puerto Rico. He noted the lessons we are learning from Maria — which knocked out 95 percent of all cell sites and many telephone switches — point to the need for more resilient communications infrastructures. “Research is needed to develop and prototype novel networking architectures that support a minimal level of communications, for example, using pre-deployed mesh and opportunistic solar-powered store-and-forward networks, for both first responders and the public. Self-configuring ‘autonomic’ networks can recover capabilities without the need for experts.”

The CCC still continues to monitor this space: an update to the National Research Agenda for Intelligent Infrastructure white paper was published in early 2021. The update–written by CCC Vice Chair Daniel Lopresti (Lehigh University) and Shashi Shekhar (University of Minnesota)–argues: “Strategic, sustained Federal investments in intelligent infrastructure will increase safety and resilience, improve efficiencies and civic services, and broaden employment opportunities and job growth nationwide. The technologies that comprise intelligent infrastructure can also provide keys to solving some of the most vexing challenges we face today, including confronting future pandemics and natural disasters, achieving sustainability and energy efficiency goals, and advancing social justice. Enabling those technologies effectively will require investment in the associated computing research as well, beyond and in concert with the basic building projects.” (p. 1).

Lopresti and Shekhar will host a scientific session titled “Intelligent Infrastructure For All : Challenges and Opportunities” at the American Association for the Advancement of Science (AAAS) 2022 Annual Meeting. The session, taking place Friday, February 18, 2022 will provide an overview of several compelling opportunities for intelligent infrastructure. Learn more about the panel here and register to attend the AAAS Annual Meeting here.

Learn more about the past work of the CCC’s Intelligent Infrastructure task force on its webpage and find more CCC content related to IoT and ubiquitous computing here. Hopefully, we will continue to see members of the computing research community meaningfully engage in this space. You can also read more about the recently passed bill and its potential impacts on the research community on the CRA Policy Blog. 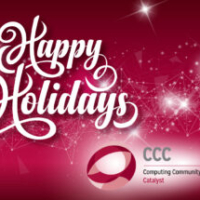 Call for Proposals: Creating Visions for Computing Research
Scroll to top
We use cookies to understand how you use our site and to improve your experience. By continuing to use our site, you accept our use of cookies.Accept Read More
Disclaimer
Privacy Overview