As further advancements in Artificial Intelligence are made, automated processes and robotics are becoming a ubiquitous entity in the workforce. As a result, there is a growing concern among the public that robots will replace humans and cause a massive job shortage. The Computing Community Consortium (CCC) organized the “Robotics: Empowering not Replacing People” scientific session at the 2022 American Association for the Advancement of Science (AAAS) Annual Meeting in February to address this concern in the public perception.

The panel moderated by CCC Council Member, Maria Gini (University of Minnesota, Twin Cities) and featuring Henrik Christensen (University of California, San Diego), Michelle Johnson (University of Pennsylvania) and Julie Shah (Massachusetts Institute of Technology) refuted the claim that robots would decrease job openings and stated the concern is based off of a misconception on the actual capabilities of an AI and their position in the workforce. The speakers explored why robots are so important to the economy, new fields where implementing robotics would be beneficial, and refuted the public perception that AI in the workforce will put people out of jobs, but instead create new jobs.

As the event was fully virtual, the session consisted of three “spotlight” videos that registrants could watch beforehand, each featuring a presentation from one of the speakers outlining their current research and opinions on the matter.

Henrik Christensen’s presentation, “Empowering People Using Robot Technology” took a two prong approach to the issue, first outlining why we need robots and the second showing why that is not a bad thing. Christensen started off by pointing out the growing need for robotics in the workforce due to individualization of products, the growing dependency ratio, urbanization and COVID. The graph (Figure 1) below compares the dependency ratio (a comparison of those retired and above age 65 in comparison to members of the workforce). As you can see in the US there are more than two people of “dependency” for every one person in the workforce. Christensen recounted the fact that the life span of a human being goes up by 8 hours every day. As a result, there are more people than ever that need assistance in everyday life and there are not enough workers to satiate the demand. Technology such as a robot that brings meals to someone with low mobility, or dispenses pills or aids those with memory impairments will help people “age in place” enabling them to stay at home and live independently for longer periods of time. Christensen urges that technology makes it possible to empower people from cradle to grave. 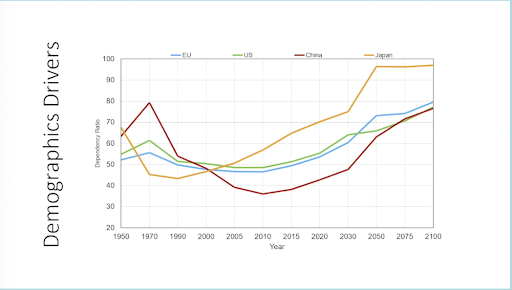 Continuing with the theme of robots not replacing jobs, but being used to bridge a gap in the workforce Michelle Johnson spoke of the use of robots in physical therapy and rehabilitation settings in her presentation, “Rehabilitation can Help Bridge Gaps in Stroke and Rehabilitation Care”. Johnson stated she gets the question almost daily, whether or not therapy and rehabilitation robots will replace current physical therapists. She assures in the same sense as Christensen, that these robots will not be used to replace but instead assist and complement current therapy roles. As with the aging population, strokes are becoming more and more common, as is the survival rate. There are not enough rehabilitation workers to compensate for the demand and robots can help in repetitive tasks and objective testing to bridge the gap. Johnson gave the example of high repetition, and high intensity work such as moving a limb a thousand times to try and restart muscle memory in a patient. Tiring and time-consuming a therapist cannot do that with a patient that many times repetitively, whereas a robot will not tire and additionally, will be able to objectively detect progress.

This leads us to the question of how robots can truly become a partner to the workforce and are able to do a broader range of tasks in more complex environments versus the stagnant, single-objective tasks that most do now. Julie Shah addresses this question and dives deeper into the roadblocks preventing this from being a reality in her presentation “Intelligent Machine Teammates”.

Shah starts off by emphasizing the limited ability we have to safely and properly integrate artificial intelligence into society without first teaching robots to successfully model humans.

She gave the example of Roombas, artificially intelligent vacuums, viewing homeowners the same as a couch or table leg resulting in a lot of bruised ankles from being hit. At the moment, robots view humans as inanimate obstacles, they need an effective model of us before they can learn to model tasks and collaborate in the workplace. Shah included a video in her presentation on current research that used a robot to help set a kitchen table. The robot observed a person setting the table and used that model to recreate the process. The goal is to enable training a robot through a feedback loop of direct training from the domain expert and transparent behavior from the robot on what it has learned. If the robots are taught higher level specifications of the delineation between what is acceptable and what is not acceptable they will be more flexible and able to adapt to disturbances. 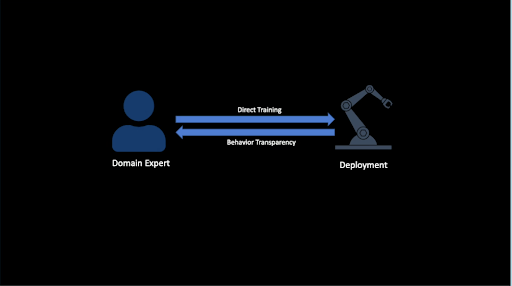 Moderator Maria Gini opened up the Q&A asking the panelists what impact COVID-19 has had on robotics.

All panelists named a number of areas within robotics that required immediate growth and research due to the pandemic, such as technologies to support medical staff shortage, decrease the risk of infection within hospitals and contact tracing. Tying back to using robotics to not replace people but bridge the gap of physical therapy needs and a growing aging population, Johnson said “COVID showed us what happens when supply and demand don’t match up. We think that it is so far away but it can happen in an instant.” The world saw those devastating effects with overrun hospitals and an understaffed medical field.

Gini asked further questions about robots replacing doctors, whether technology regulations were holding back technological innovation and how to educate the population on what robots can actually do. Overall the remaining theme was that robots are nowhere near possessing the capabilities to replace humans in the workforce but are instead needed to bridge the growing gap in the needs of the population and act as a complimentary entity in the workforce to make our lives easier. As you can see in Figure 3 (Robots & Jobs) the manufacturing employment rate and robot sales in the US are growing together. Robots will not take over factories – in fact, most autonomous factories is one robot per five people. 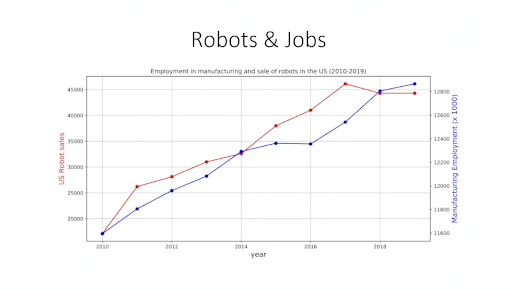 This AAAS panel was featured in The Economist “Covid has reset relations between people and robots”. The article dove into the claim that automation is likely to accelerate citing two main reasons: that robots are getting better and “The Great Resignation” a nickname capturing the mass movement of US citizens quitting their jobs due to the pandemic. The article went on to address the likely uptick in automation has quite a few people worried that robots will outnumber and replace humans in the workforce and used the AAAS panel session and statements from the three panelist experts to combat the concern.

You can view all CCC AAAS sessions here.